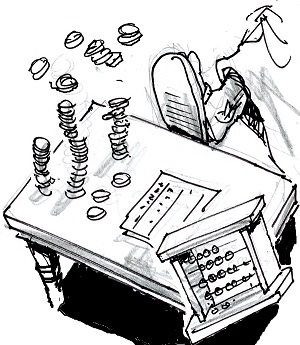 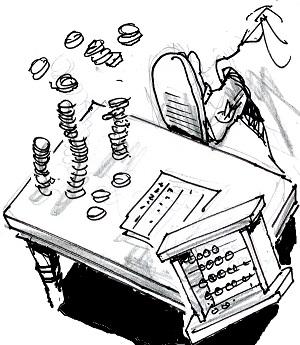 When Pope Francis quoted St. Basil in 2015 that the unfettered pursuit of money was “the dung of the devil,” he rattled the ears of both wealthy venture capitalists and some bishops dependent on their philanthropy.  Their shock was like the reaction of the disciples when Jesus said that “It will be hard for one who is rich to enter the Kingdom of Heaven.”  They assumed that wealth was a sign of God’s favor in this world, not an obstacle.

Jesus knew that wealth, if it was the driving motive in someone’s life, distorted the common good and infected the interdependent nature of markets and institutions everyone relied on.  He did not hesitate to upend the money changers tables and animal selling when they intruded on the central purpose of the temple as a place of prayer. He knew that where there was wealth for the few it created poverty for the many and divided society into castes.  In the story that preceded today’s Gospel, he saw the effect wealth had on a young man seeking a closer relationship with God who went away sad when offered the chance to become a disciple.

The image of the loaded camel unable to squeeze through the narrow gate kept open for latecomers after the main city gates were closed was a familiar saying that captured the burden that wealth becomes when it defines life.  Peter spoke for the others when he asked Jesus, “Who then can be saved?”  Jesus made clear that conversion is possible only with God’s help. Peter pursued the topic by asking Jesus what they would gain by their sacrifices in following him.  “We have given up everything. What will there be for us?”

It is hard to know if Jesus winked when he assured them that they would get one hundredfold for everything they gave up, for he knew the costs of their discipleship would be great when he himself went to the cross. He may have overheard them on the road imagining the thrones they would sit on when he was revealed in glory as the Messiah in Jerusalem.  They would find glory, but in a very different way.

They would be cast out into a hostile world to imitate his self-emptying mission and preach the paradoxes of being last in order to be first in God’s eyes. The reality of their greatness and wealth was that they would take up the burdens of servant leadership, responsible for the needs of growing faith communities. They would find eternal life in losing their lives as preachers and pastors over the flock of the church, and most of them would die for his name among the first generation of Christian martyrs.

The desire for and pursuit of money is so pervasive in our consumer culture, it is hard to discern all the ways in which it has come to rule our attitudes and values. We have seen how money dominates our political system, mass media and our democracy.  Capitalism’s influence on every aspect of American life is seamless and clear, from healthcare to education, tax laws, social and military spending, foreign policy and the distribution of wealth and opportunity.  Money defines success and drives the system.

Catholic Social Justice Principles are are clearly at odds with many priorities and norms.  If today’s Gospel and the words of Pope Francis about the dangers of money shock us as they did the disciples, we will be better citizens and voters if we apply them to our choices in the upcoming elections that will define the nation well into the future.