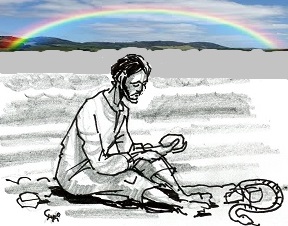 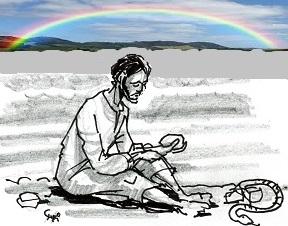 Journalism teaches that the first function of mass media is the transmission of culture.  This happens implicitly as the “dominant culture whispers in our consciousness,” and for Americans that means a sense of national identity and history and the ever-present voice of consumer capitalism.

The voices that whispered to Jesus from childhood were the Bible and liturgical life of the Jewish community. He knew the Scriptures, the fabulous stories, heroes, prophets and psalms. He was formed by the Word of God and the Spirit as his sense of self matured and shaped him in the Nazareth synagogue and in pilgrimage with his parents to the temple in Jerusalem. What surfaced in him was the conviction that he was somehow being called to fulfill God’s plan of salvation.

The four Gospels were also composed in this same cultural and religious milieu, and they tell us that Jesus knew and applied the stories and symbols, the Law and the Prophets to his own ministry.  He set out to recapitulate the Bible from the creation, the flood, the patriarchs, the exodus and desert sojourn, the entry into the promised land, the Davidic kingdom, the fall, exile and return, and the struggles under conquest up to the Roman occupation.  He shared the longing of his fellow Jews for the promised messiah and a new age.

The first Sunday of Lent also forms us in same Word of God with readings about the flood and the desert temptations, personalized by Jesus in the Judean wilderness following his baptism, which itself was a reenactment of the Exodus story and a theophany that confirmed him as God’s “beloved Son.”  The flood story fills our imaginations with the destructive and life-giving nature of water, the renewal of Creation and the promise of God’s abiding Providence as history makes its way toward a rainbow destiny.  We make that journey through the Paschal Mystery of Jesus, going down into the waters of baptism to die with him, then rising with him to new life.

One possible takeaway from today’s readings is see both the flood story and Jesus’ desert retreat as challenges to strip away everything except the essentials and to refocus ourselves on God alone.  What would you take into the ark as seeds for a renewed future? Pope Francis has called Covid-19 our chance to restart our world by jettisoning the dysfunction and unfairness that have damaged global culture and the planet, but to embrace the lessons learned about interdependency, the value of diversity, the human benefits of technology without the abuses of technocracy that manipulate and isolate us in a virtual nowhere.

Jesus fasted in the desert to confront the temptation to power with the surrender to service as the only path to an authentic life.  What will you decide this Lent as your new normal on the other side of the pandemic?