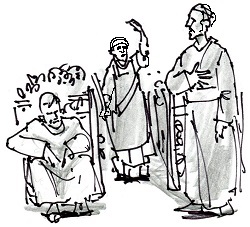 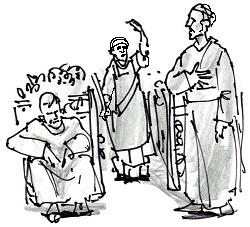 Twenty-Sixth Sunday of the Year

The Bible has lots of contrasting pairs: Cain and Abel, Isaac and Ishmael, Jacob and Esau, to name a few. Each story invites us to compare them to learn some lesson. Jesus uses this device to ask his audiences to compare the Prodigal Son with his older brother, Lazarus with Dives, the Pharisee and the Publican at prayer, and even Martha and her sister, Mary.  In today’s Gospel, we hear the invitation in the opening sentence: “A man had two sons.”

The story is addressed to the chief priests and elders, and the message is clear. They are the dutiful son who said “Yes” to his father when asked to work in the vineyard, but they did not go.  Jesus puts their behavior in the context of their recognition that John the Baptist was a prophet but then their failure to repent. The tax collectors and prostitutes, the usual scofflaws, did repent.  Actions speak louder than words.  Only those who act, even if they are slow to respond, have done the father’s will.

The parable is loaded with messages for the priests and elders. First, Jesus creates parity between them and the tax collectors and prostitutes.  “These are your brothers and sisters,” Jesus implies, “and though you reject them, God is calling them to an obedience you resist.” Second, Jesus shows them how the mercy they are rejecting is transforming sinners. It is because you think you are not sinners but already righteous that you do not repent. Your hearts are closed to mercy, so you are missing God’s gift of salvation to sinners.

We may wonder why Jesus chose for his closest disciples individuals of questionable qualities and limitations, a veritable sampling of human foibles -- slow to learn, selfish, vacillating, fighting among themselves, and in the end, running away in fear and confusion.  Jesus called them precisely because they were sinners, but open to learn and eventually able to grasp the miracle of grace that was transforming them.  They were all like the brother who first said "No" or "Maybe" or "Later" but then came along.

We call Jesus’ message “Good News” because it changes our lives and gives us hopes we could not imagine for ourselves.  Yet, the most mysterious aspect of this news is that it is wholly undeserved, a pure gift, even though we are sinners, messed up, slow to learn, capable of hurting one another deeply but too proud to admit it, blind to our own faults but keen to the sins of others, alarmed and shockingly selfish if others seek the same advantages we claim for ourselves, and ready to betray others to save ourselves.

The truth is that we are all the brother who said "Yes" but did not go. We are all the sister who said "No" but then went.  The Good News is meant for sinners like us to help us, however long it takes, to do the father’s will, which is to enter the vineyard that is God’s astonishing, undeserved gift of life.