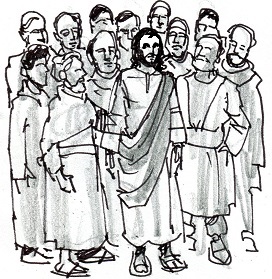 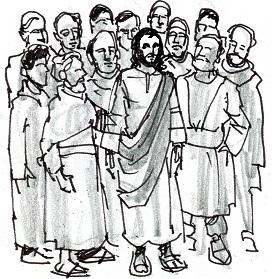 Yesterday’s Gospel about the rich young man who went away sad because of his many possessions continues in today’s reading about the disciples’ reaction.

They believed that wealth was a sign of favor from God, so they were shocked when Jesus said that it was as hard for a rich person to enter the Kingdom of heaven as it was for a camel to pass through the eye of a needle.

Some scripture scholars think the dramatic image depicted the impossibility of a fully loaded camel entering the city through a narrow door after the main gates had been closed for the night. If so, it fit perfectly the rich man’s dilemma. He was too attached to his material possessions to relinquish them in order to pass through the narrow gate of conversion.

Peter, aware that he and the other disciple had accepted voluntary poverty to follow Jesus, changed the focus of the question to what reward they might expect for their sacrifices.  He reveals the same quid-pro-quo mindset of the rich young man: “We have given up everything; what are we going to get?”  We recall from earlier passages that the disciples were eager to share in the glory they imagine Jesus will claim when they get to Jerusalem.

There is almost playfulness in Jesus’ response. They will get their reward, but not in a way that offers a balance of accounts in this world. Their reward will be in “the age to come,” the eschatological realm where the Son of Man will mount his throne and the Twelve will have their own thrones.

In the meantime, back to reality, their prospects for glory are the same as Jesus’ expectation that suffering and rejection await them in the Holy City. Like him, they will be stripped of every earthly certainty as they pass through the narrow gate of his death. Chastened, they will emerge on the other side of that dark interval to the glory of his risen life.

Beyond every material calculus, they will take up their roles as leaders of the church, where everything they formally knew of family, houses and possessions will be multiplied one hundredfold, not as wealth but as responsibilities. They will be pastors of the flock, leaders of faith communities and missionaries of the truth. The lives of the Apostles, as much as we know, were lives of service ending in martyrdom. This was their glory, a foretaste of the fullness of life they would have in eternity.

The Gospels are filled with people seeking Jesus for different reasons –ambition, glory, spiritual power, personal fulfillment, healing and purpose. All of them are eventually led to the Paschal Mystery, a lifelong process of dying to self in order to live with Christ. It we really want to be rich, this is the one treasure that surpasses all others.