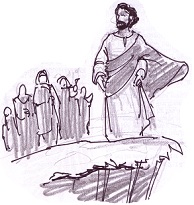 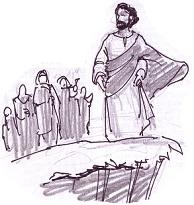 “Go, prophecy to my people … Now hear the word of the Lord!”

It is often only in hindsight that we realize that history turns on the words of prophets. During their lifetimes, those who speak inconvenient and demanding truths are dismissed as unpatriotic or obstacles to progress. It is only after they are gone that we accept the changes they proposed.  Prophets announce ideas whose time has come, and eventually we understand this and honor them.

Dr. Martin Luther King, Jr was reviled as a communist. Archbishop Oscar Romero was criticized by Rome for being too political. Susan B. Anthony and Elizabeth Cady Stanton were accused of subverting the family. Harriet Tubman was called a criminal for depriving slave owners of their property. In our own time, long ignored advocates for racial justice face threats and backlash, and Dr. Anthony Fauci is both lauded and reviled for scolding political leaders and a reluctant public for failing to contain a deadly public health crisis.  Young Greta Thunberg is already honored for her passionate advocacy for the Planet and future generations.

Amos was such a fearless prophet in 8th Century Israel. When Amaziah, the priest of Bethel, ordered him to stop his criticism of the king and to leave Israel, Amos doubled down his commitment to preach the Word he had received in even stronger terms.

Opposition to Jesus during his ministry was pervasive and continuous. Even his miracles of healing and message of forgiveness incited condemnation from religious authorities. When Jesus told a paralytic that his sins were forgiven, the scribes murmured that he was blaspheming for claiming something only God could grant. To show that God was authorizing his words, Jesus restored the paralytic to health.

One interpretation of Jesus’ claim that “the Son of Man has the power on earth to forgive sins,” is that he was saying “human beings” have this ability. In effect, this undermined the cultic system that required people to go to the priests and offer sacrifices in the temple to gain forgiveness for their sins. Jesus must have infuriated the scribes for questioning temple revenues and challenging its leaders’ claims to represent God.

Jesus knew that prophets were not accepted in their own time and place because they called a reluctant humanity to change.  He deliberately took his ministry from Galilee to Jerusalem, where “all prophets came to die” (Luke 13:33), because challenging the system there was most transformative.  Jesus didn’t just speak God’s word; he was God’s Word. His presence had the uncontested force of God’s Word at Creation when what God said became reality.

The Gospel Jesus preached was not just advice or an ideal; it affirmed God’s will for the world by directing history to fulfill its divine destiny.  Even human effort to block God’s will by killing Jesus (see Caiaphas’ words in John 11:50), could not alter Jesus’s mission to save the world. His death on the cross was part of the plan to defeat sin and death, answered by the Resurrection, the birth of the New Creation.

Prophets, as disturbing as they seem, are voices of hope. They tell us where we need to go to find greater life. We cannot stay where we are any longer. The turmoil and opposition that accompanies important change is cause for joy. It is also a plea not to postpone the grace of the moment, which calls us to welcome a rebirth in hope.