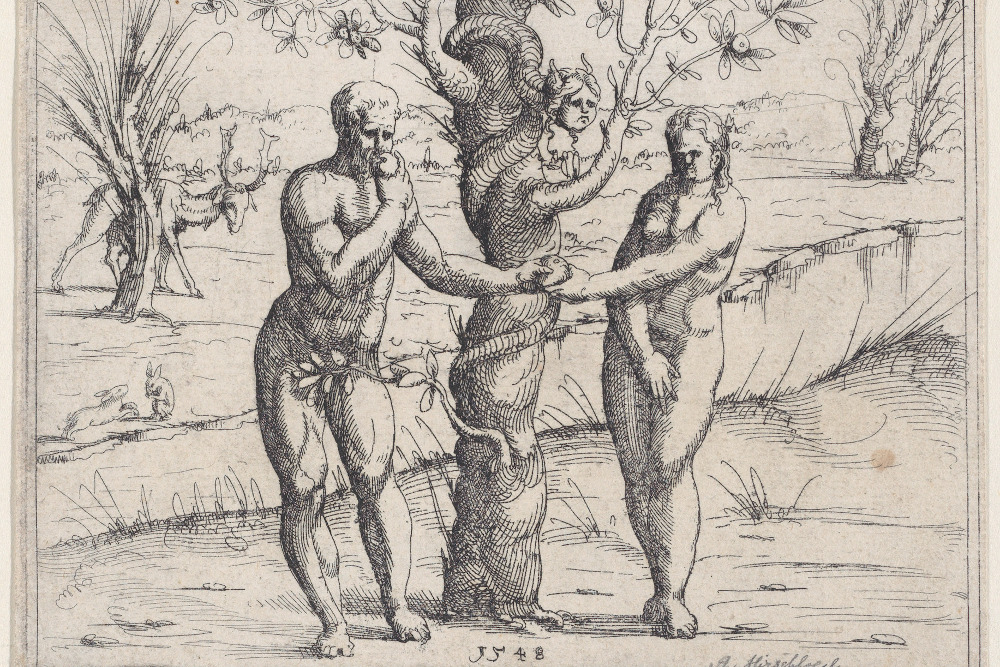 "Adam and Eve Eating the Forbidden Fruit, from Old and New Testaments" (1548) by Augustin Hirschvogel (Gift of Harry G. Friedman, 1959)

It's here. March first. That's a date. It might also be an order. With Jesus and his ancestors, we are about to march into the 40-day pilgrimage we call Lent. What if we really take this as an order?

"March first!" Don't make your own plans too carefully, don't decide what you want to do or learn. March first. Go into this Lent like Jesus went into the desert — with nothing except vulnerability to God.

The story that starts our Lent is the myth of Satan's very first encounter with God's children. Like every myth worth its salt, Genesis 2-3 uses a tall tale to tell deep truth. The scene opens with a description of how God fashioned human creatures and blew the life of the divine spirit into them. Rather than let them wander happily ever after in the garden, Satan showed up to debate with Eve so she could bring Adam into line.

All Satan had to do was sow some doubt: "Did God really tell you that you couldn't eat that fruit?"

That got Eve to thinking: "Actually, it was Adam who said it to me. Will he always try to tell me what to do?"

Grinning at his good start, Satan wasn't content with separating man and wife. He went for the big prize: divide them both from God. Appearing quite sophisticated, Satan explained it all, as if to a child. "Oh, my dear, don't you see? God is afraid of you! It's time for liberation! Take control and you'll be like God!"

Forgetting that they had been created as images of God, they bought into Satan's theology of jealousy: the worship of power. From that moment on, humanity would be inundated with competing ideas about life and innumerable distortions of God's image.

By the time he met Jesus in the desert, Satan had really honed his skills. Today's Gospel says, "Jesus was led by the Spirit into the desert," but from that moment on, we don't hear God's voice — at least not directly. It quickly becomes the story of Jesus and Satan. Both Jesus and Satan quote the word of God, parleying back and forth.

Everything Satan says is based on his first words: "If you are the Son of God." That's just a riff on his encounter with Adam and Eve — it all has to do with being the image of God. The tempter likes this core question. It challenges every person, young, old and in between. "Who do you think you are?"

Satan already knows Jesus' answer. Like every good Jew, especially one brought up by parents like Mary and Joseph, Jesus knows who he is: a son of God, God's chosen one.

The tests Satan put to Jesus were the big three: the ones Israel faced in the desert and the ones each of us has to work through.

"Turn these stones into bread," means take care of No. 1. A loaf of bread in the hand is worth more than the dream of freedom that costs a long trek through the desert! Look at everything with an eye to what you can get out of it and never, never delay your own gratification!

"Jump off the top of the Temple!" attempts to test and manipulate God. It's the desecration of making the Temple a marketplace for insurance, an eternal quid pro quo that turns our relationship with God into a contract.

Jesus answers Satan that he's involved in a relationship of love, a joining of wills, and that neither side of the relationship is interested in an eternal test.

The desperate demon now loses his subtlety. "Worship me, worship my kind of power, and all things will be yours." The poor devil, his lying reputation precedes him. His ultimate and most insidious lie is that power equals control over others.

All Jesus has to do is look around to see the fallacy. Are the Romans powerful or pitifully dependent on their arms? Has any king ever erased the prophets' message? Jesus knows that only love is omnipotent. Love is the one power that gives life and the one that even death cannot overcome.

The time has come to march into the desert with Jesus. This trek is designed to teach us who we are, to teach us to assume the power we have been given as people made in the image of God, free of the insecurity that makes us selfish, free to become the lovers we were created to be.

A version of this story appeared in the Feb 21-March 5, 2020 print issue under the headline: March first!.