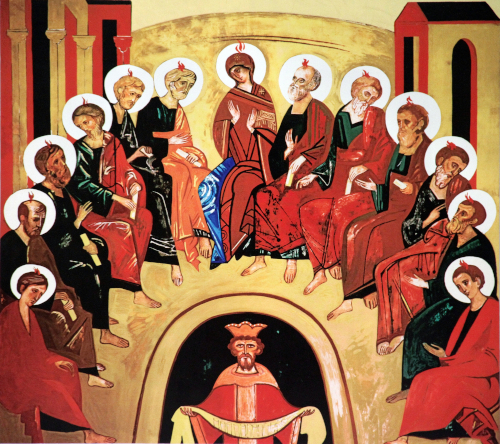 A scene showing the apostles from Pentecost is depicted in artwork at Our Lady of Divine Providence Church in Providenciales, Turks and Caicos Islands. (CNS/Gregory A. Shemitz) 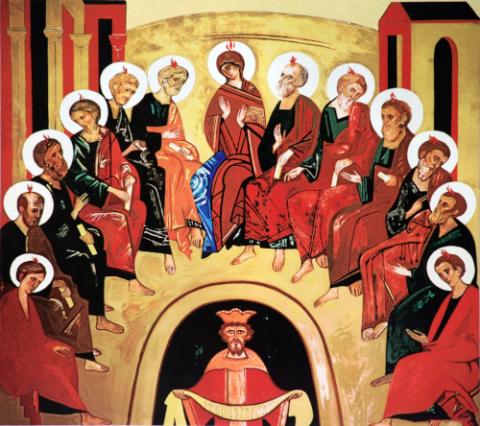 A scene showing the apostles from Pentecost is depicted in artwork at Our Lady of Divine Providence Church in Providenciales, Turks and Caicos Islands. (CNS/Gregory A. Shemitz)

Last week, we celebrated the ascension, that wondrous scene where Jesus took leave of his disciples, assuring them that the Spirit would lead them through their next step as his followers.

As with the Ascension, the most detailed account of Pentecost comes from comes from the Acts of the Apostles, volume two of Luke's Gospel. In today's Gospel, John will give us an alternative version in which Jesus imparts his Spirit on the very day of the resurrection. Obviously, the early Christian community appreciated and found truth in the diverse accounts.

The word Pentecost is derived from the Greek word for 50 and originally referred to a feast celebrated 50 days after Passover. The number 50 has great symbolic importance. It marks a jubilee: seven weeks of years culminate in a 50th year when debts are cancelled, slaves are freed and everyone celebrates God's mercy.

Luke's narrative gives the impression that Pentecost was rather unexpected and prompted the disciples to unanticipated ways of thinking. According to the first chapter of Acts, after the Ascension, a group of 120 disciples continued to meet and pray together. During the 40 days after the resurrection, those disciples had encountered the risen Lord in various guises. They rehashed their stories and chose to remain together. Determined to carry on, they decided that they should find a replacement for Judas and reconstitute the 12 as special leaders.

Then, on the 50th day after the Resurrection, something new started to happen among them. Unlike in the days of Moses when God appeared on a mountain with fire (Exodus 19:16-18), flames now came to each member of the community, and they were all filled with the Holy Spirit. In spite of their well-planned reorganization, the Spirit wasn't limited by the number 12 but rather came to the group of women and men that Luke numbered at 120 — 10 times their model.

Luke's story could lead us to believe that the disciples went through an instantaneous transformation: receiving the Spirit, speaking in tongues, then preaching effectively to a multi-cultural crowd. In reality, that which seemed to happen in an instant was the effect of meeting with the risen Lord, prayer and discernment. Instead of a miraculous conversion, it took them 50 days of communal prayer to open their hearts and minds to what God was ready to do among them and in all of them.

The entirety of the Acts of the Apostles tells the story of the community's slow opening to the breadth of God's plan, with an emphasis on their gradual acceptance of Paul and his incorporation of Gentiles into the fold. As the letters of Paul demonstrate, it was not easy for the disciples to adjust to the fact that the Spirit works through each individual believer, whether Greek, Jew, slave, free, woman or man. Knowing how much they would have to grow, Jesus had forewarned them that they had much to learn, but that they would only be able to bear it when they were guided by the Spirit of truth.

The Gospel of John depicts Jesus breathing that Spirit on the disciples on the evening of his resurrection. According to John 20, Jesus entrusts his disciples with his mission, equating their relationship with him to his own relationship with the Father. The mission he gives them is forgiveness. He warns them that if they do not make reconciliation available, it will not happen in their time.

Pentecost celebrates the grace-filled thriving of the human community through the indwelling of the Spirit. It reminds us that Jesus' promise to bestow his Spirit upon us can be limited only by our own unwillingness to continue his mission. In First Corinthians, Paul insists that we will know the Spirit to the extent that we appreciate the diversity of gifts present in our community. The Acts of the Apostles assures us that the Spirit continues to work through frail, diverse, sometimes fighting, often feisty, human beings. The Spirit of God leads us to broaden our plans and go beyond our own narrow imaginations.

As we contemplate our celebration of Pentecost, we might do well to remember the story of how Jesus' disciples discerned that they should choose one man to fill out Judas' place, only to realize that Spirit had chosen more than a hundred men and women, empowering them all to continue Jesus' mission. This 50th day of Easter reminds us that when we are willing, the Spirit takes our best plans and multiplies them by 10 — over and again.

A version of this story appeared in the May 14-27, 2021 print issue under the headline: The Spirit multiplies our plans.