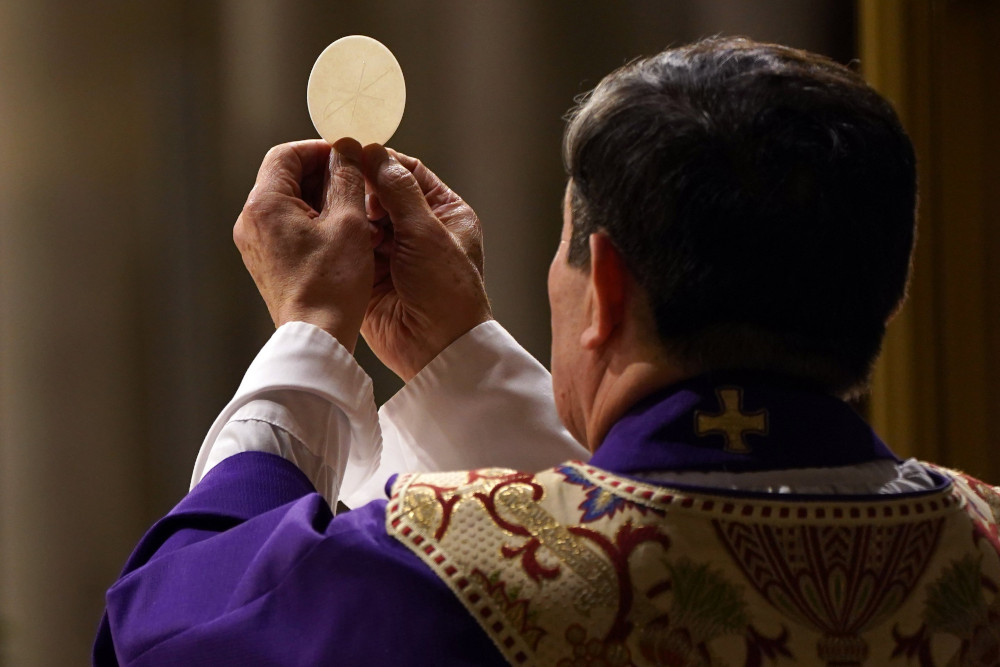 Today's reading from Exodus describes a majestic, identity-forging scene in which the people who had followed Moses out of slavery solemnly committed themselves to the covenant God offered them. Twice, everybody — men, women and children — cried with one voice, "We will do everything that the LORD has told us."

Just imagine trying to get a group of U.S. citizens — or Catholics — to say that! It's not so much accepting God's law that would be the rub; the difficulty would be in getting all of them to agree to one answer. Some would say "Yes!" Others would ask, "What are the legal and financial ramifications?" Others would say, "I will do it, but I refuse to be judged by how others comply!" The typical U.S. citizen might be more comfortable with Psalm 116 which allows each individual to proclaim her or his own promise: "I will take the cup of salvation, and call on the name of the Lord."

Jesus and his Hebrew ancestors shared a culture very different from our own. They were "collectivists," people who learn from infancy on that membership in your group creates your identity and that everyone's well-being depends on group cohesion. The accomplishments of your great leaders like Moses and Jesus, as well as the reputation of your family or tribe, are the source of your honor because you are identified with them.

When it came to the preparations for Jesus' last Passover with his disciples, Mark reflects subtly on the relationship between leader and followers. With careful detail, Mark describes how some disciples asked Jesus, "Where do you want us … to prepare for you to eat the Passover?" In response, Jesus told them where they would share the meal together. Jesus was planning for a shared celebration of commitment, not a moment when they would see him act the hero. Emphasizing that point, when Jesus passed the cup at the supper, Mark tells us that they "all drank from it" even before he explained what it symbolized. Jesus wanted them to realize that being identified with him implied imitating him.

As he emphasized the cup, Mark wanted readers to remember the incident in which James and John had asked to reign at Jesus' right and left in his glory. In response, Jesus asked them if they could drink the cup that he would drink (Mark 10:35-41). Like the good but naive folks they were, they said "Yes." It was a pledge that would take a long time to come true.

The bread Jesus offered as his own self and the cup of the new covenant invited the disciples to be in communion with the essence of his life, death and resurrection. Their participation in bread and cup were a pledge to be faithful and to do as he did. Like their ancestors who promised to do everything God asked, like the people of God throughout the ages, they failed almost immediately. But, because God is who God is, no failure is definitive.

Most of the disciples who communed at the supper failed, but were not lost. Some women from that company remained near Jesus as he died on the cross. They were then the first to discover and proclaim his resurrection. Others of the group slowly but surely came to comprehend, to live, and to preach the new covenant. Through their communion with Christ, the disciples became, as St. Paul teaches, the Body of Christ extended through time.

As we celebrate this feast, a reprise of Holy Thursday, we are invited to join the disciples in hearing Jesus' invitation to receive the bread of Communion and to drink the cup of the new covenant with him. St. Augustine teaches us: "If you want to understand the body of Christ, listen to the apostle telling the faithful, You, though, are the body of Christ and its members (1 Cor 12.27). So if it's you that are the body of Christ … it's the mystery meaning you [emphasis by the author] that has been placed on the Lord's table. … So be a member of the body of Christ in order to make [your] Amen true" (Sermon 272).

According to St. Augustine, the Solemnity of the Most Holy Body and Blood of Christ is our feast day. On this day, like every Sunday, we repeat the celebration that forges our identity and strengthens us to be the very body of Christ that we receive. Jesus let his disciples know that joining him in the celebration of the Passover was an event of communion in his self-giving love. Celebrating the body and blood of Christ always calls us to do what he commanded: to share our lives as he did. When we dare to say "Amen," we proclaim, "Yes, we will receive what we are and be what we eat."

A version of this story appeared in the May 28-June 10, 2021 print issue under the headline: Be what you eat.