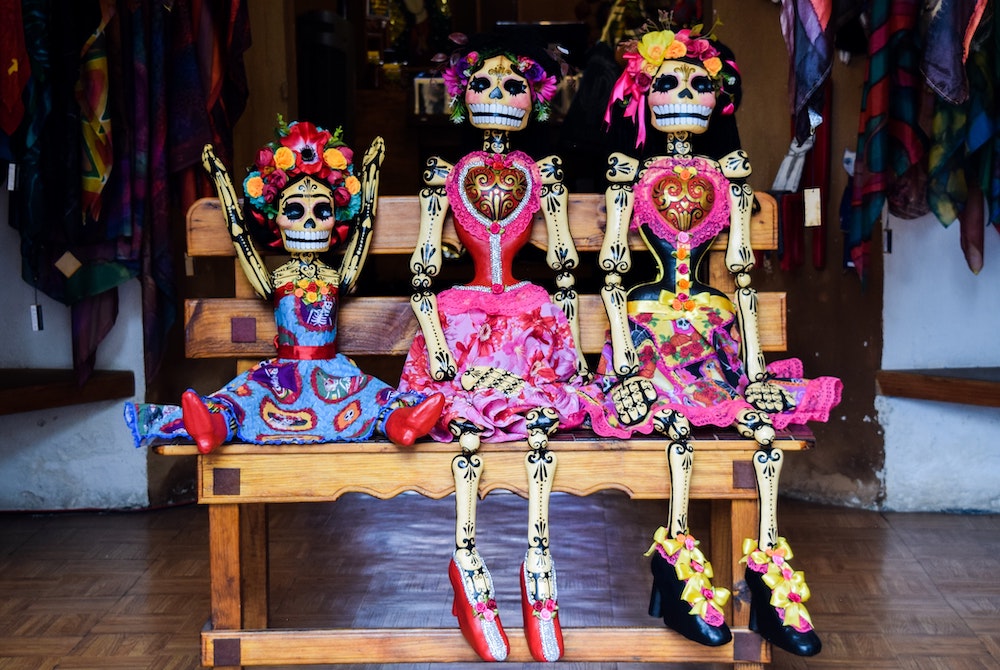 Beginning with the feasts of All Saints and All Souls, November is traditionally called the month of the dead. (Unsplash/Valeria Almaraz)

Beginning with the feasts of All Saints and All Souls, November is traditionally called the month of the dead. The dead. What a stark word and reminder of the inevitable! We generally prefer softer, more sophisticated terms like "deceased" or "departed." Even St. Paul talked about those who have "fallen asleep" rather than "the dead."

Our society excels at helping us avoid confronting the friend St. Francis called Sister Death and her little cousins, Disappointment and Suffering. In November, when the leaves have fallen, the harvest is in, and seed time is far away, our culture frantically leapfrogs from the death-mockery of Halloween to materialist escapism, making Thanksgiving the opening of the Christmas shopping season. (Here we might well recall Pope Francis' alliterative warning about how consumerism creates "the desolation and anguish born of a complacent yet covetous heart, the feverish pursuit of frivolous pleasures and a blunted conscience.") November's liturgies provide an opportunity to grapple with the grace-filled truth that death is an integral and creative part of our life of faith, that Christianity is not intended to fulfill our hopes and expectations, but to bring us transformation.

In today's selection from Thessalonians, Paul helps his people deal with death and unmet expectations. Unlike the Christians who faced martyrdom, the Thessalonians suffered spiritual anguish because Christ had not returned in glory, and members of their community were dying without seeing the Second Coming. Serious persecution might have been more spiritually manageable than the slow, insidious disappointment eating away at their faith. They had so anchored their hopes on seeing Jesus' return that the death of good Christians threw them into a crisis of faith.

Before we judge them as naïve, we might consider how we share their predicament. We may not be longing to see the end of the world, but as individuals, church and society, we have particular hopes and dreams that we have merged so thoroughly with our faith that losing them threatens to crack our very foundations. When reality shatters our cherished — often subconscious or unspoken — expectations, we, like Paul and the Thessalonians, have to discern and distinguish the essence of faith from its accoutrements, the things we counted on even though they were neither promised nor essential.

The Thessalonians were shaken when revered members of the community died in a world still wracked by sin. For us, the crisis might stem from events as particular as the unconscionable, scandalous behavior of church leaders or the apparent victory of evil in the seemingly senseless suffering caused by war, injustice, natural disaster or the combination of those we've experienced with COVID-19. Realities that force us to confront non-lethal facets of the mystery of our mortality include the anguish of unfulfilled expectations, lack of control over circumstances, and the death-dealing power of sinfulness in our world.

Paul offered his faith-shaken community a genuine alternative to their despair. He exhorted them, "Do not grieve like those who have no hope." Note, he offered no pious platitudes. Paul admitted that they had every reason to mourn; he encouraged them to deal directly with the death of their hopes and expectations. But he reminded them that they also a vision and an experience of faith to orient their grief. He told them to grieve and to do it like Christians who believe that God's power and imagination go far beyond their own.

This could have been the moment for pie-in-the-sky proclamations like, "Even if we don't understand, it's all for the best," but that wasn't Paul's way. Drawing from the heart of his Gospel, Paul reminded his community of the meaning of faith in the crucified savior: Jesus' death under the reign of sin was transformed though his resurrection into the fullness of life in God. All of Paul's explanations about the future simply reiterated his core conviction that "we shall always be one with the Lord." That implies union in his suffering as well as his resurrection.

What does this mean for us in the 21st century? Liturgical November leads us to open ourselves to the transforming potential lurking in our mortality. The year 2020 has brought the world close to a million unexpected deaths and brought unanticipated losses in every arena of life. Today, St. Paul calls us to interpret all of this in the light of the paschal mystery. If we believe that Jesus died and rose, we can face death in both its finite and its final expressions as openings to a resurrection we trust without being able to imagine it.

We are invited to join all those who have gone before us in learning that grieving death and limitations is a step in the paschal process, not the end. Death reminds us that we are not in control; resurrection promises that that is a very good thing.

A version of this story appeared in the Oct 30-Nov 12, 2020 print issue under the headline: Transforming power.