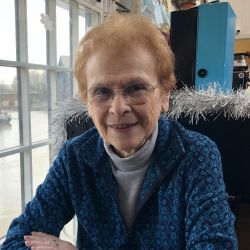 Gertrude (Trudy) Spinelli, 82, of Martinsville, NJ, passed away on November 20, 2021 at Robert Wood Johnson Medical Center in New Brunswick, NJ, from complications following a massive stroke. Born and raised in Raritan, NJ, Gertrude moved to Martinsville, NJ, in 1965 and lived there for the rest of her life.

Trudy graduated from Somerville High School, Class of 1957.  She went on to receive her Bachelor of Science Degree at Douglas College. She worked as a High School Biology Teacher for Franklin Township Schools for 8 years until she left to raise her children.  She resumed work in 1983 as a secretary for the architecture firm SSP & Associates.

Gertrude was very active in her local parish of Blessed Sacrament Church where she was a member of the Altar Rosary Society and taught CCD.  She enjoyed knitting, golf, tennis and card playing, especially Bridge.  Her greatest love, particularly in her later years, was travelling to spend time with her children and grandchildren around the world.  She was a person of strong faith and values who worked for and donated to numerous charities, from Fish (a charity helping local poor) to charities supporting indigenous people around the country.

She is preceded in death by her beloved parents, Anna and Joseph Suk, her loving husband, Martin J. Spinelli Jr., (2000), two sisters, Teresa Chiselko and Eleanor Stimpson, and her daughter-in-law Sasha Roberts.

Memorial contributions may be made in Gertrude’s memory to the Crohn’s/Colitis Foundation https://www.crohnscolitisfoundation.org/.