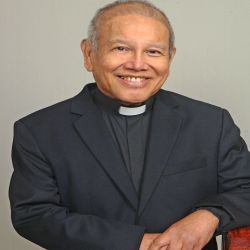 Fr. Gilbert Luis R. Centina III, OSA, the first pastor of Filipino ancestry of Holy Rosary Church in Spanish Harlem, Manhattan, New York and an award-winning poet and author, died last May 1. He was 72 years old and 47 by religious profession, according to the official bulletin issued by the Augustinian Order in Madrid, Spain.

Born on May 19, 1947 in La Carlota, City, The Philippines, his large body of work assures him a solid place in world literature in both English and Spanish, as well as in the rarefied field of Catholic poetry.

A well-known poet, he was a member of the Augustinian houses of both Our Mother of Good Counsel School in León and Andrés Urdaneta College in Loiu, Vizcaya, Spain.

He died alone in his bed in the Hospital of León. Due to local health regulations, his mortal remains were transferred in the afternoon of the same day he died to the municipal cemetery of León, where a small presence of the Augustinian community said a prayer.

The Augustinian friar was assigned to different missions abroad, including New York City, where he became the first pastor of Filipino ancestry of Holy Rosary Church in Spanish Harlem from 2007-2010. Fr. Centina, whose parents settled in Belleville, NJ after emigrating from the Philippines, also volunteered as a missionary in Iquitos, Peru, from 1976 to 1978.

He started his literary career while a student at University of Santo Tomás, contributing articles, poetry and short fiction to various national publications and becoming editor of a youth magazine and a staff member of a cultural magazine while still a student. For many years, he was literary editor of Homelife, the Philippines' Catholic magazine.

Shortly upon his return from Peru in 1978, he became assistant pastor of San José Church in Iloilo City. His last assignment in the Philippines was as chaplain of Colegio San Agustín - Makati, from 1990 until 2005 when he moved to the United States.

He renovated San José Church as well as its bowling alley when he was appointed assistant parochial vicar and treasurer of the Iloilo City parish. He taught literature at the University of the Philippines-Visayas (Iloilo campus) and at Pius XII Institute of Catechetical and Social Studies under the Archdiocese of Jaro while serving as chaplain of Apostulatus Maris.

As a celebrated Catholic author and poet, his accolades include the Palanca Memorial Awards, the Philippines’ highest literary honor, in English poetry in 1974, the Focus Literary Awards in English poetry in 1982, and the Catholic Authors Award in 1998 from the Archdiocese of Manila under then Cardinal Jaime L. Sin and the Asian Catholic Publishers.

Critics have described his work as a conscience that attacks and spares no one except the weak. It is full of intrinsic insights into humanity and its connection with a greater being. His work explores the relationship between man and his Creator, between space and time, and between the earthly and heavenly continuums of life, alongside our overwhelming shared sense of love, courage and hope.

His poems have been included in various textbooks and anthologies on Philippine literature in English and published in the United States, Canada and Spain.

The last seven years of his life saw an explosion of frenzied creativity, resulting in the publication of six poetry books, a novel and a literary criticism. He rediscovered his Spanish roots in Spain, where he began producing bilingual poetry collections and where he found a receptive and expanding audience.

Two weeks prior to his death, he completed his final and still unpublished work, Recovecos/Crevices, his third bilingual poetry collection, consisting of 350 poems in Spanish and English.

In his preface to this book, which turned out to be a prescient, if ironic, foreboding of his own mortality, he wrote: “The new coronavirus has rewritten the rules of daily life, and even our most sophisticated technologies seem powerless to stop it as we descend into a dystopian world where no one is sure how all this will end,” adding, “this collection of poetry is my gift to those who survived the pandemic and my tribute to those who fought well and died.”