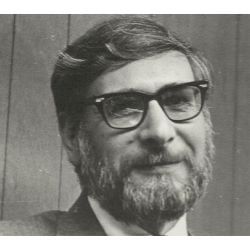 Jason Petosa, an innovative NCR publisher who expanded the company's readership reach in the 1980s, died Feb. 9. He had been living in a Kansas nursing home, struggling with advancing Parkinson's disease for several years. He was 81 years old.

As publisher of National Catholic Reporter, Petosa introduced new products and services both to better serve parish pastoral needs and to bring needed new revenue into the company. He began Praying magazine, spinning off a bimonthly supplement to the newspaper. He also started several newsletters, Eucharistic Minister, Catechist's Connection, Gathering and The Caring Community, each aimed at parish audiences. He also started a books division, the Leaven Press, which later took the Sheed & Ward imprint.

The publications gathered new audiences, but eventually proved costly. In 1997, in a company restructuring, the board of directors severed these enterprises.

Petosa, born on April 26, 1939, grew up in Des Moines, Iowa. He attended the Marquette University College of Journalism and did graduate work at the Syracuse University School of Journalism. He entered the St. Paul Seminary in Canfield, Ohio, studied in Rome, and was ordained a priest in 1967, but left the active ministry in 1971 and was released from his vows the following year.

He married Theodora Anne Doleski, a former Belize Papal Volunteer, in August 1972. They have one son, Justin.

He began his communications and journalism career in 1967 in Canfield as one of three founding directors of Alba House communications, a multimedia publisher of religious materials. Meanwhile, he served for two years as director of radio and television for the Diocese of Youngstown, Ohio. In 1971, he was appointed director of public relations at Alice Lloyd College, Pippa Passes, Kentucky, where he taught and supervised communications.

Petosa first began writing for NCR in 1975 from Kentucky, where he covered topics such as teachers' unions, poverty, charismatic Catholics, and Appalachian social and economic issues. In September 1977, Arthur Jones, then NCR publisher and editor, named Petosa NCR national affairs writer. The following year, Petosa undertook some NCR marketing projects. It was in 1979 that Jones recommended to the NCR Board of Directors that it hire Petosa as NCR publisher, ending Jones' 19-month stint as company head following the death of publisher Donald Thorman in November 1977.

In May 1980, Petosa was named president of National Catholic Reporter Publishing Company Inc. and also named to the board. Petosa held the publisher's post until 1985, when he left NCR and began Steadfast Publishing Company, a Kansas City, Missouri-based firm aimed at assisting college students with information on loans and other aids.

"Professionally, Jason was a quietly thorough person in his undertakings," Jones said. "Likeable, bright, not showy — but determined. Determined, when given the opportunity, to make a success of being NCR's publisher.

"On a personal level, he was kind, considerate and obliging. In neither his professional nor personal spheres was he a pushover, that's where his determination showed through. His wife and helpmate, Teddi, a successful children's author, was a fine balance as companion and partner, and they had the joy of raising a son, Justin."

Petosa was proud of his Italian heritage and was very much a product of the Second Vatican Council, embracing its clarion calls for global justice and church renewal. He had a deep attachment to the church and geared his life fanning the flames of justice, peace and inclusiveness. He was endlessly optimistic, even when that spirit of optimism clashed with church retrenchment and the blistering clerical sex abuse crisis and episcopal cover-ups.

In January 2009, upon the 50th anniversary of Pope John XXIII's call for an ecumenical council, Petosa wrote an essay for NCR, in which he detailed his hopes for the church and his disappointments. He focused on the centrality of forgiveness as core to Christian commitments. His essay offered a vision of church and a portrait of Petosa's own spirit. He wrote:

Forgiveness is the way to make us whole again. It is the medium through which we tap into the transcendent power of the Holy Spirit. Forgiveness is the balm to ease our pain and restore our optimism. Forgiveness helps us avoid sinking into the ugly cancer of contempt. It frees us from the temptation to get even, to one-up or put down our adversaries. Forgiveness enables us to purify our intentions so that every step of our ecclesial crusade is marked with magnanimity.

Forgiveness matters because internal church reform is important. Because the church — the entire people of God, including the hierarchy — is important to the world and to each of us individually. A disfigured body of Christ, a distorted proclaiming of the good news, destroys the church's credibility, which weakens and diminishes the power of that proclamation, much as Kryptonite saps the power of Superman.

Family members, friends and colleagues say they remember Petosa for his intelligence, gentle spirit, warmth, humor, hope and perseverance. They cite the pleasures of having worked with him, shared food and drink with him, listened to his stories, prizing his shy smile, and having enjoyed his wit and companionship.

Cut off from family for extended periods because of the COVID-19 pandemic, he was allowed visits by his wife, Teddi, and son, Justin, in the days and hours leading up to his death. He is also survived by a brother, Stephen, of Des Moines, Iowa.

A Mass of the Resurrection will take place after the COVID-19 pandemic.

Memorial donations can be made to a local food pantry, to the Society of St. Paul in Staten Island, New York, or to the National Catholic Reporter.