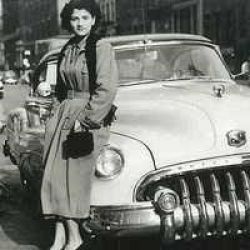 On Thursday, January 31, 2019, Rhina Ligia Carmona passed away peacefully in her home in Silver Spring, MD.  She was born on April 30, 1933 in Santo Domingo, Dominican Republic to Arsenio Cano and Luz Maria Mejia. Rhina immigrated to the United States in 1944 with her sister, aunt and cousin to reside in New York City. In 1954, she married her husband of 64 years, Guillermo Carmona, and moved to Connecticut. They had three children.

For 23 years, Rhina worked for General Electric in Manhattan, Fairfield and Bridgeport, Connecticut, retiring in 1995 as an executive responsible for engineer recruitment and training.  She had been employed previously by Nestle, and had been a co-owner of The Pink Poodle in Manhattan and Valcan in  Stratford, CT.

Throughout her life, Rhina was joyfully engaged in her church and community.  She was involved in Cursillo ministry and sang in the choir at St. James Church in Stratford.  With her husband, Rhina established the church’s Adoration Chapel and annual Our Lady of Guadalupe celebration.  Rhina was also a Cub Scout den mother, a community organizer, and volunteer for a few political campaigns.

Rhina loved to cook, travel, read, and dance, and relished an ice cold mug of beer and “Los Mets.”   She was a proud member of The Red Hat Society.  While fiercely dedicated to her family, Rhina would lovingly mentor anyone seeking guidance and support.  In 2002, she was honored as The Connecticut Post Woman of the Year, primarily for her work in prison ministry.

Rhina is survived by her husband, son Roberto and his wife, Lisa Brailey, daughter Maria and her husband, Ari Fitzgerald, grandchildren Pilar, Isel, Lourdes, brothers Maximo, Rafael Jose, and Arsenio Canó, numerous nieces and nephews, and family by marriage.  She was preceded in death by her son, Carlos, and siblings Thelma, Danilo, and Enrique. A Mass of Christian Burial was held at St. Michael the Archangel Church in Silver Spring on February 4, 2019. Interment followed at Gate of Heaven Cemetary in Trumbull, CT on February 9, 2019.  Memorial Contributions can be made to Kairos Prison Ministry, P.O. Box 571, Tariffville, CT 06081.