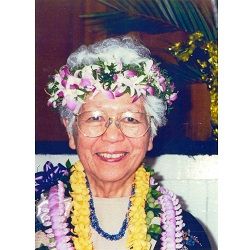 Shigeko was born in Kaupakalua, Maui, Hawaii on October 12th, 1925 to Kame (Miyashiro) Higa and Ushi Higa. She had two brothers and seven sisters.  One brother and three sisters have predeceased her. She was very close to her Sister Mary Louise, who is also a Maryknoll Sister and an active member of the Congregation today. Shigeko became interested in the Catholic Faith in eighth grade, she was baptized as Bernadette on August 14th, 1943 at Sacred Heart Church in Honolulu, Oahu.

From 1949-1950, Bernadette worked at St. Francis Hospital. She then entered the Maryknoll Sisters Novitiate with her sister, Mary Louise in Valley Park, MO on February 1st, 1951 from St. Stephen’s Parish in Honolulu. At her Reception, she received the religious name Sister Marie Bernadette. She made her First Profession of Vows on September 8th, 1953 in Valley Park, MO and spent the rest of the year working in the Outpatient Clinic at the Maryknoll Sisters Center in Maryknoll, NY. In 1954, Bernadette was assigned to Queen of the World Hospital in Kansas City, MO; while there she made her Final Vows on September 8th, 1959.

After making her Final Vows, she was assigned to Taiwan, there she began her mission with language study. From 1960-1972, Sister Bernadette worked with indigenous people in a pre and post-natal clinic, well baby clinic and held nutrition classes in Taiwan.

In 1973, Sister Bernadette returned to St. Francis Hospital in Honolulu for a refresher course in general nursing.  She then studied at Chaminade College in Honolulu from 1973-1976, where she earned a Bachelor’s Degree in General Studies.

After doing Congregational Service at the Maryknoll Sisters Center, NY from 1976-1978, Sister Bernadette was assigned to the Congregation’s new mission project in Bangladesh. While waiting for her visa to Bangladesh, she returned to Honolulu and worked in a Surgeon’s clinic for one year. In Bangladesh, she was involved in Natural Family Planning for three years. In 1984, she returned to Hawaii to serve as an Assistant Chaplain at Hawaii State Hospital. She also studied Clinical Pastoral Education (CPE), counseled patients in a mental hospital and provided religious services until 1994.

Sister Bernadette returned to the Maryknoll Sisters Center, NY where she worked as a clerk/typist in the Admissions Office until 1997. She then returned to Hawaii once again to do volunteer work in the Regional Office, visit the sick at their homes and in the hospital.

Sister Bernadette died on March 12th, 2019 at the Maryknoll Sisters Center, NY. She was accompanied by her loving sister Mary Louise at the time of her death.

Sister Bernadette will be cremated. A Vespers Service and Memorial Mass are pending.