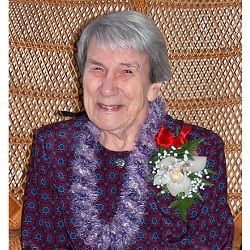 Maryknoll, NY: Sister Mary Gertrude Naab, M.M. missioner and social worker died on May 17th, 2019 at the Maryknoll Sisters Center in Maryknoll, NY.  She was 97 years old and had been a Maryknoll Sister for 78 years.  She was born in Passaic, NJ on November 27th, 1921 to Grace (Donovan) Naab and Joseph Naab. She had two sisters, Peggy and Patricia.  She is survived by her sister Patricia.

In 1938, Mary graduated from St. John Cathedral High School in Paterson, NJ.  After graduating, she began her college studies at Seton Hill College in Greensburg, PA until 1940.  She then entered the Maryknoll Sisters Novitiate in Maryknoll, NY on July 2nd, 1940.  At her Reception she received the religious name, Sister Grace Mary. She made her First Profession of Vows on March 7th, 1943 at the Maryknoll Sisters Center, Maryknoll, NY.   After completing her novitiate, she was sent to study at Manhattanville College in Purchase, NY, where she earned a Bachelor of Arts Degree in Sociology in 1944.

Sister Mary then received her first mission assignment to Hawaii, where she made her Final Profession of Vows on March 7th, 1946. When she first arrived to the island she worked as a case worker at the Catholic Social Services in Honolulu and then as Executive Secretary and Supervisor until 1950.   During this time, she also attended the University of Hawaii Graduate School of Social Work, where she earned a certificate in Social Casework.

In 1954, Sister Mary was assigned to Stockton, CA to develop the Catholic Social Services in that Diocese. There, she served as Executive Secretary and Supervisor until 1960.  She then served as Survey Director of Catholic Charities in the Archdiocese of San Francisco, CA. At that time, Sister Mary also enrolled at the University of California in Berkeley, CA earning the positions of Medical Social Worker at Stanford/Palo Alto Hospital and as a Psychiatric Social Worker at Langley – Porter Neuro Psychiatric Institute, San Francisco, CA.

For the next several years, Sister Mary served between New York and Hawaii in many different roles. In 1962 she returned to Honolulu, HI to continue to serve as Executive Secretary and Supervisor. She also served as Chairman of the Hawaii Chapter of the National Association of Social Workers until 1969. She was then appointed as Superior of the Maryknoll Sisters Center, Maryknoll, NY.  Returning to Hawaii once again, Sister Mary served as the Planning Coordinator for the Diocese of Honolulu as a member of the Board of Education until 1971.  From 1971-1975, she worked as the Unit Administrator for Queen Liliuokalani Children’s Centers situated on five Hawaiian Islands.  At the same time, she served as a member of the Sisters Regional Governing Board and Regional Planning Coordinator.

From 1988-1992, Sister Mary was appointed as Co-Personnel Director for the Sisters and Lay Employees at the Maryknoll Sisters Center, Maryknoll NY. She was then invited by Bishop J. Quinn Weitzel, M.M. to the U.S. territory of American Samoa, to help facilitate the development of Catholic Social Services in the Diocese of Samoa-Pago Pago from 1993-1997.

In 1997, Sister Mary was assigned to the Maryknoll Sisters retirement house in Monrovia, CA where she did volunteer work at Santa Anita Family Service. In 2006, she was awarded a certificate as American Senior of the Year for her volunteer work there.

In 2007, Sister Mary returned to the Maryknoll Sisters Center, Maryknoll NY where she fully retired.

A Vespers service was held for Sister Mary on Wednesday, May 22, 2019 at 4:15 p.m. in the Chapel of the Annunciation at Maryknoll Sisters Center.

The interment will follow in the Maryknoll Sisters cemetery on the Center grounds.