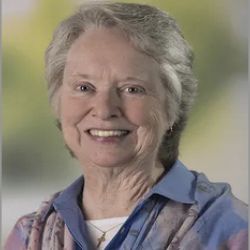 Born in Sharon, Pennsylvania on December 18, 1948, Sr. Mary Stanton was the daughter of James R. and Julianne (Miller) Stanton and sibling of Karen A. Evans, Julie Stanton Nichols, James F. Stanton, Anne Stanton Hoover, Ellen S. Parcetich and John H. Stanton. Sr. Mary died on July 30, 2022 after a courageous battle with metastatic breast cancer. By her side was her lifelong friend, Sue Kathman.

Sr. Mary entered the Sisters of Mercy in 1971 in Erie, Pennsylvania and transferred to Cincinnati in 1979. For more than four decades, she dedicated her energies and passions to helping provide housing and educational services to people in need in Greater Cincinnati. In 1984, Sr. Mary co-founded Bethany House Services, Inc., a Cincinnati-based social service agency that provides emergency shelter, as well as transitional and permanent housing options and supportive services. She served as Bethany House's Executive Director until 2014. She co-founded Catholics United for the Poor and went on to serve on the board. For the past seven years, she served as Executive Coordinator and Mission Director for Mercy Neighborhood Ministries, a Sisters of Mercy-sponsored ministry focused on educational initiatives, workforce development and senior and supportive services for those in need.

Sr. Mary taught Religion at Mother of Mercy High School from 1979-1984, and served as Assistant Director, Programs in Peace and Justice, at Xavier University from 1984-1986.

Sr. Mary's commitment to being of service earned her the 1999 Cincinnati Enquirer Woman of the Year award, and in 2012, the Greater Cincinnati Coalition for the Homeless Lifetime Achievement Award. She also was recognized as one of the 200 Greater Cincinnatians in the Bicentennial Year and received the Seed Planter's Award of the House of Refuge Mission, Governor's Award for Humanitarian Service, Wellington Ambassador for Women and Children Award and the Greater Cincinnati Coalition for the Homeless Volunteer Award. She celebrated her 50th Jubilee as a Sister of Mercy in 2021.

Sr. Mary earned a Master of Arts degree in religious education/pastoral counseling from the Aquinas Institute of Religious Studies and a Bachelor of Arts degree in education and music from Mercyhurst College. She was a Licensed Social Worker in the state of Ohio, chaired the Sisters of Mercy Institute Chapter Planning Committee and provided pro-bono consultation with Cincinnati-based non-profit organizations. She served on the board of Mercy Health - Cincinnati and continued to serve on Bon Secours Mercy Health's public juridic person.

A pillar of the Cincinnati community, Sister Mary will be missed by the many people whose lives she touched. To continue her legacy of giving, donations can be made to Mercy Neighborhood Ministries in Sister Mary Stanton's memory, 1602 Madison Rd. Cincinnati, OH 45206.