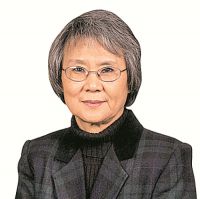 Therese Park is a Korean American who has lived in the Kansas City metro area for 54 years and played with the Kansas City Philharmonic-Symphony for 30 years. After her retirement in 1997, she wrote extensively about the Korean War she lived through and those who granted South Korea freedom.

Perspective: America needs God's healing grace more than ever. As this chaplain made clear on Easter 1951, we must understand what Jesus went through — his suffering, his humiliation and his death on the cross.