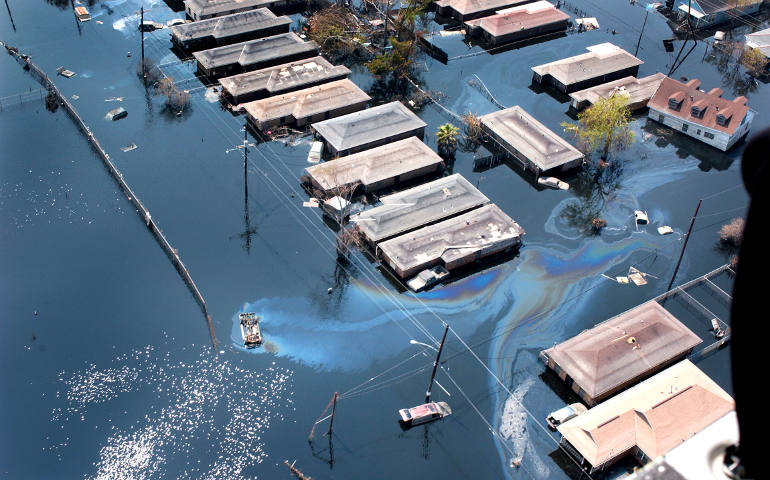 Like many of his brother priests, Fr. Dennis Hayes decided to take his chances and stay put as Hurricane Katrina teased the Louisiana coast, hoping the storm's Category 5 fury would spare his parish of St. Louise de Marillac in Arabi.

Surely Katrina would veer away at the last minute as so many hurricanes had done before. And even if the storm did cause some damage, thought Hayes, at least he would be available to his parishioners.

After successfully weathering Katrina on the second floor of St. Louise's concrete-and-steel school building -- with the Blessed Sacrament, his parish's sacramental registers and his pet dog Badooki -- Hayes assumed the worst was over by Monday morning, Aug. 29, 2005.

But that sigh of relief turned into alarm when the town of Arabi began filling up like a bathtub.

"Within one hour -- between about 8 and 9 a.m. -- I saw the water cover all of the homes and the entire parish plant," recalled Hayes, now pastor of Blessed Trinity Church in New Orleans. "In just that little bit of time the water rose from the ground to the wires of the light poles. That night I could hear cries and wailing of people for help," he said.

By Tuesday morning, helicopters were flying up and down each street, pulling people to safety from rooftops and trees. Spotting an upended canoe stranded on a nearby rooftop, Hayes climbed out of a second-floor window to commandeer the vessel.

Realizing the floodwaters wouldn't be receding any time soon, he signaled a helicopter and got pulled to safety. The fleeing priest had no choice but to leave behind the Blessed Sacrament, the parish records and his beloved pet.

He was taken to a National Guard base where survivors were instructed to make their way to the Superdome, using the Mississippi River levee as an "elevated roadway" into town.

Hayes didn't realize that he would be walking into a war zone.

"It was like a riot," he said of the scene on the way to the Superdome. He found a working pay phone and spoke to a cousin in New York who told him that then-Gov. Kathleen Blanco was advising people not to go to the stadium because of dire conditions there.

The priest considered making his way to the Notre Dame Seminary but as he walked along the water level was soon up to his neck and full of diesel oil. He jumped on a porch and was taken in by a family who let him stay in their third-floor apartment.

"Everyone was still saying, 'Go to the Superdome," Hayes recalled. "Six hundred buses would be there to evacuate people."

So, he used a borrowed ice chest as a flotation device, and made his way there.

Nothing prepared him for what he experienced.

"I got a real taste of what the poor of New Orleans were going through," Hayes said. "Urination and defecation in the bathrooms had poured out into the passageways of the dome; the vending stands had all been decimated; there was smoke all over;people cursing;stifling heat; babies screaming; a fire during the middle of the night; two babies born; shooting at helicopters."

At dawn, Hayes left the dome, concluding that "those 600 buses were not coming."

"So I got back into that miserable water and walked back to the cathedral," Hayes said. "I knelt down in front of the cathedral and asked for New Orleans to be saved."

He decided to journey "full circle" to somehow get back to his parish to recover the Blessed Sacrament, the sacramental records and his dog.

On the levee he met a sheriff who invited the priest to help him minister to people the authorities were still rescuing from rooftops and trees. He joined him with the two religious items he had, his rosary and a St. Benedict crucifix.

For the next 10 days, Hayes and his fellow volunteers ministered to Katrina's victims, including the rescuers themselves. At one point he was able to retrieve the Blessed Sacrament, the parish registers and Badooki, his dog, from the still-submerged St. Louise school building, assisted by firefighters.

He said Katrina's 10th anniversary resonates with him because the number 10 looms large in the recitation of the rosary, a prayer close to his heart and one that he said continually during his Katrina odyssey.

"I think it's interesting that each mystery of the rosary takes a full decade of Hail Marys in order to fully embrace that mystery," said Hayes, adding that he considers Katrina to be "a divine mystery" just like the mysteries of the rosary. The word 'hurricane' itself is a Native American word meaning "sacred wind," he said.

Looking back, he also appreciates the "paschal" aspect of the storm.

"In the same way, light comes through its opposite, which is darkness," he said. "We have had a great deal of darkness, despair and danger, but through all of that a great luminosity has occurred, a great light has been cast on what's important, on what our values are."