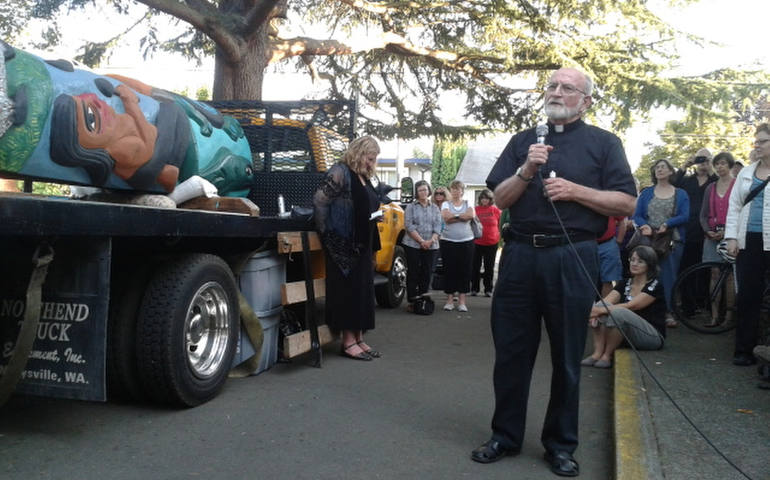 Portland Mayor Charlie Hales got a roar of approval Monday when he told a packed Catholic church that he opposes new fossil fuel projects that would affect his city.

The crowd of more than 400 at St. Philip Neri Church had convened for the blessing of a totem pole that residents of Washington state's coastal Lummi Nation carved as a symbol of opposition to coal export facilities along the Columbia River.

Hales also discussed his July trip to the Vatican, where he had been invited by Pope Francis to discuss how cities are leading action on climate change, He said the takeaway was this: Climate change is serious, and it's affecting the poor, but it's not too late.

"We have an obligation here in Portland to keep moving," Hale said, announcing that he would push for the city to divest from fossil fuel companies. The mayor, who is running for re-election, also announced hopes to quadruple solar power use by city government.

In his encyclical, "Laudato Si', on Care for Our Common Home," the pope said that human life depends on the well-being of the planet. Matt Cato, director of the Portland archdiocese's Office of Life, Justice and Peace, told the crowd that the encyclical is a moral document, not a political one.

"It calls people to conversion," Cato said, adding that the pope is calling people to face reality and change patterns of production and consumption.

Other speakers included a Unitarian minister, environmental activists and tribal leaders from the Northwest.

Paul Lumley of the Columbia River Inter-Tribal Fishing Commission said communities along the river take all the risk when it comes to coal exports but get none of the benefits. Activists argue that trains filled with coal from Montana and Wyoming and bound for China will leave coal dust in local waters, harming fish. When the coal gets burned overseas, the pollution will go airborne and get carried back over the Northwest, they claim.

"It scares us, and it should scare you, too," Lumley told the gathering. He said that tribes, environmentalists and churches make up an "unstoppable coalition."

"We are bound not by fear or sadness, but by love," said Brian Manning, a field organizer with Greenpeace.

Coal export terminals are slated for Cherry Point near Bellingham, Wash., Longview, Wash., and the Port of Morrow in north central Oregon.

The totem pole will make more stops on its trek to Montana coal mines.

"Is this what you want to be, a national sacrifice zone?" asked Jewell James, of the Lummi Nation who led the team of carvers.

Before the speeches and the blessing, people unfamiliar with Catholic churches entered and looked around quietly. St. Philip Neri, one of the first properties to build a bioswale to handle runoff water and prevent river pollution, will hold a prayer service on Sept. 1, which Francis has designated as World Day of Prayer for Creation.

"It is all of our responsibility to care for the world," said Paulist Fr. Charles Brunick, pastor of St. Philip Neri.