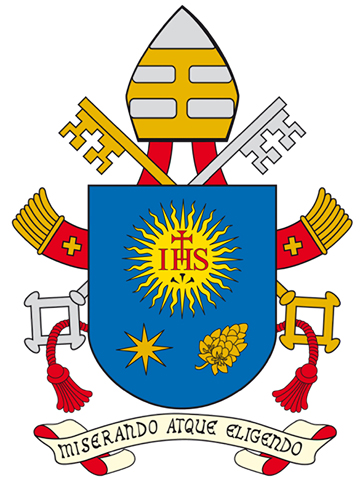 Coat of arms for Pope Francis with Jesuit "IHS" symbol

One of Rome’s best known members of the Society of Jesus, and certainly one of the most wired in terms of Vatican contacts, said yesterday that for those with eyes to see, Francis cannot help but seem a “profoundly Jesuit” pope.

Jesuit Fr. Gianfranco Ghirlanda, a distinguished canon lawyer and former rector of the Jesuit-run Gregorian University, spoke April 19 as part of a panel discussing Francis’ papacy at the one-month mark. The event was sponsored by the “Alberto Hurtado Center for Faith and Culture” at the Gregorian.

Over the years, Ghirlanda has been a consulter for seven Vatican departments, as well as a resource person for Vatican events such as synods of bishops. He first met then-Cardinal Jorge Mario Bergoglio, he said, while serving as an expert for a 2001 synod where Bergoglio was the relator, or general secretary, having taken over from Cardinal Edward Egan of New York after the 9/11 Twin Towers attacks.

First of all, Ghirlanda said, the question of whether Francis still remains a Jesuit has a clear legal answer.  He cited canon 705 of the Code of Canon Law, which reads: “A religious raised to the episcopate remains a member of his own institute but is subject to the Roman Pontiff alone in virtue of his vow of obedience and is not bound by obligations which he himself prudently judges cannot be reconciled with his position.”

There’s no reason that provision doesn’t apply equally to the Bishop of Rome, Ghirlanda said, so QED: Francis remains a member of the Society of Jesus.

“The Holy Spirit calls you to a charism forever,” Ghirlanda said. “It doesn’t depend on whether you become a bishop or a pope.”

(He added that what’s fundamental in terms of Jesuit identity is the spirit of the society, not one’s precise legal standing. “You’re a member of an institute because you belong to its spirit, not because you follow the rules,” he said. “You can follow all the rules and have nothing to do with the spirit.”)

Moreover, Ghirlanda said, there’s a sense in which any pope is already “inside” the Society of Jesus in a way that isn’t true of other religious orders.

Reflecting on the Jesuits’ famous fourth vow of availability to the pope for the missions, Ghirlanda said that St. Ignatius and his early companions actually made that promise before deciding to remain together as a community, so it preceded the foundation of the order. In that sense, he said, the pope is “inside” the Jesuits as the ultimate authority, and the superior general is actually his delegate.

More deeply, Ghirlanda argued that the Jesuit imprint is clear on this pope both in terms of style and substance – beginning with the letters “IHS” on his coat of arms, a core Jesuit symbol, and the fact that one of his first phone calls after election was to Fr. Adolfo Nicolás, the order’s superior general.

The “normality” which has already become a hallmark of Francis’ papacy, Ghirlanda said, such as paying his own bills and living in the Casa Santa Marta, comes out of the “Jesuit mode of life.” Ghirlanda also argued that Francis’ capacity for “decisive and strong government” also reflects his Jesuit formation, particularly the idea that “humility is not the same thing as weakness.”

Ghirlanda noted that Francis has not yet explicitly cited any Jesuits in his speeches or homilies, though he did make a passing reference to the Gregorian University in his first Angelus address on March 17. On that occasion, Francis also referred to a book by a cardinal and added that he didn’t want anyone to think he was making publicity for his cardinals; Ghirlanda laughingly added, “I don’t want anyone to think I’m making propaganda for the Jesuits here tonight, but I was asked to talk on this subject and I’m doing it out of obedience.”

Anyone familiar with the “Spiritual Exercises” of Ignatius of Loyola, Ghirlanda said, will see them reflected in Francis’ concentration on three core themes: the poor, the Cross, and the mercy of God.

(Composed by Ignatius between 1522 and 1524, the exercises are a collection of meditations, prayers and mental exercises designed to unfold over roughly 30 days.)

In the “Exercises,” Ghirlanda said, “everything is placed under the banner of the Cross of Christ,” a point that he said becomes “existential and not just intellectual” in the way Ignatius presents it.

He said that various references by Francis to the centrality of the Cross reflect this emphasis, including his homily to the cardinals on March 14 and the homily for his inaugural Mass March 19.

“Let us never forget that authentic power is service, and that the pope too, when exercising power, must enter ever more fully into that service which has its radiant culmination on the Cross,” Francis said March 19.

Perhaps the most celebrated spiritual phrase to date from Francis has been his repeated insistence that “God never tires of forgiving us, it’s us who tire of asking for forgiveness.” That point too, Ghirlanda said, has roots in the exercises.

“The exercises begin by asking us to gaze on the sins of the angels and of humanity, and our own personal sins,” he said. “There’s an immediate link to mercy that’s part of the pedagogy of St. Ignatius.”

The bottom line, Ghirlanda said, is that “Jorge Mario Bergoglio knows the Society of Jesus from within.”

Fr. Miguel Yañez confirmed Ghirlanda’s assessment of the new pope’s palpably Jesuit style. Yañez is from Argentina, and was a novice at the time then-Fr. Bergoglio was serving as the regional provincial.

“His style as pope was with him even then,” Yañez told the crowd, saying that as provincial Bergoglio emphasized simplicity of life and remaining in close contact with ordinary believers.

Yañez also told a vintage Bergoglio story from the period after 1992, when the future pope became an auxiliary bishop in Buenos Aires and visited the seminary. The rector asked the bishop after dinner if he wanted to say a few words to the seminarians, Yañez recalled, and he said yes. He then rose and said, “I can wash the dishes tonight.”

After that, Yañez laughingly added, it became fashionable for the faculty to clear their own plates.

Tracking Bergoglio's later career, including his contributions to a 2007 document from the Latin American bishops meeting in Aparecida, Brazil, Yañez said, “I can hear his voice in so many paragraphs … it’s the same things he taught us as novices."