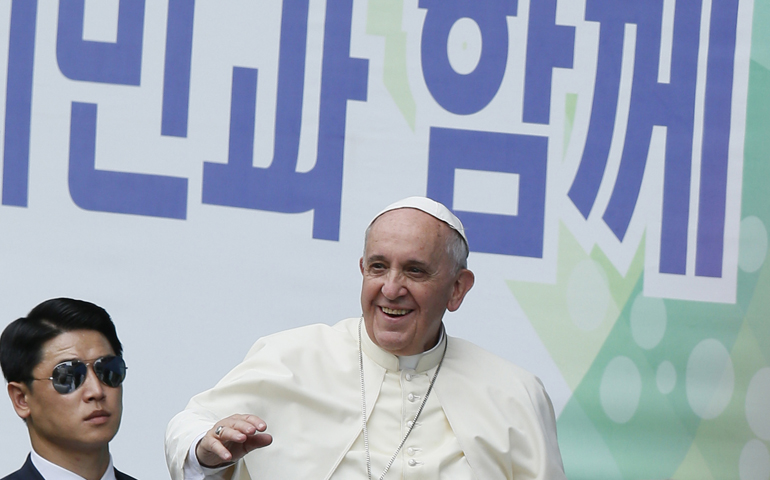 Pope Francis greets the crowd as he arrives Friday to celebrate Mass on the feast of the Assumption in World Cup Stadium in Daejeon, South Korea. (CNS/Paul Haring)

"The hope held out by the Gospel is the antidote to the spirit of despair that seems to grow like cancer in societies which are outwardly affluent yet often experience inner sadness and emptiness," the pope said Friday in his homily at the World Cup Stadium in Daejeon.

The pope voiced his hope that Christians in South Korea, the world's 13th-largest economy, might "combat the allure of a materialism that stifles authentic spiritual and cultural values and the spirit of unbridled competition, which generates selfishness and strife."

"May they also reject inhumane economic models which create new forms of poverty and marginalize workers, and the culture of death which devalues the image of God, the God of life, and violates the dignity of every man, woman and child," he said.

Just before he dressed for the Mass, Pope Francis met outside the sacristy with 10 people involved in the April Sewol ferry disaster. Some were survivors of the incident that left 300 people, mostly teens, dead; some were relatives, and a few priests were among the group.

The pope embraced and blessed them, placing his hand on their heads. Some wiped away tears.

One man, who had been preparing for two years to become a Catholic, said he had suffered deeply because his son had died in the ferry disaster. He said he had walked hundreds of kilometers, round trip, from his town to the site of the accident, on a type of pilgrimage.

He asked the pope to baptize him, and Pope Francis agreed to baptize him privately at the nunciature Saturday, before the Mass to beatify 124 Korean martyrs.

At the end of Mass, before praying the Angelus, the pope mourned those killed when the Sewol sank.

"May this tragic event, which has brought all Koreans together in grief, confirm their commitment to work together in solidarity for the common good," he said.

Pope Francis' sobering words stood in contrast to the ebullience of the crowd, and of the pope himself, as he entered the stadium in an open-sided popemobile. The pope had traveled the 85 miles from Seoul by train instead of helicopter as originally planned. Jesuit Fr. Federico Lombardi, Vatican spokesman, said authorities thought the train would be safer because of rainy weather. The spokesman said Pope Francis had never ridden a high-speed rail and welcomed the experience.

As he entered the stadium, he was greeted by thousands of people performing the wave and holding signs of welcome, including a banner reading "we love you" in Italian.

The day was overcast but warm and humid, with temperatures reaching the mid-80s. Before the Mass, members of the congregation were asked not to fan themselves with the hats or booklets during the liturgy. Many women wore white lace veils, a tradition still widely practiced in Korea.

The pope celebrated the Mass, for the feast of the Assumption, in Latin, with the readings and responses in Korean. He delivered his homily in Italian.