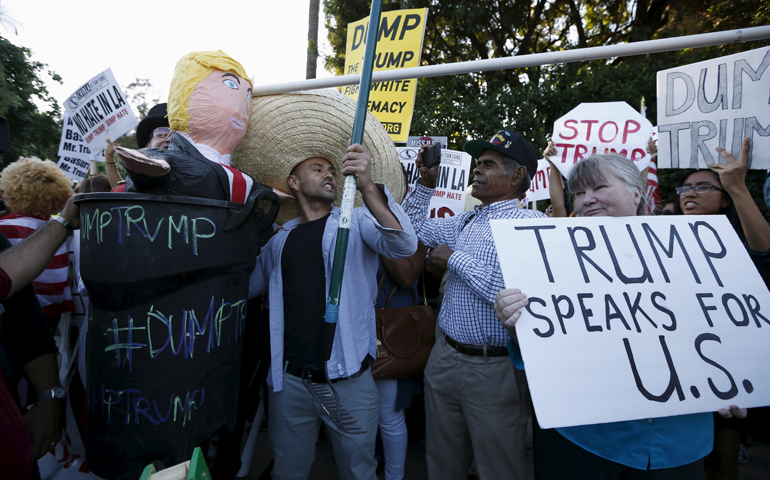 Whatever happened to the moral and ethical arguments of political debate?

I may be wrong, but I have the sense that political candidates this time around are avoiding speaking in church services. Yes, they have visited congregations here and there, but this does not seem to be a very "religious" campaign. Maybe media have not covered their visits to congregations. Maybe the candidates are worried about crossing the church/state IRS barrier. Or, maybe they have not been invited.

I would not be surprised to find that religious bodies have had enough of current political shenanigans and are loathe to get involved with any of the major candidates. No matter which way you lean, you have to admit that the level of discussion has been pretty low.

In fact, Trump didn't do so well at a Detroit church, and not long ago, Clinton gained a minimal crowd at one in Charlotte, N.C. So, I was surprised to learn that Democratic Vice Presidential Candidate Sen. Tim Kaine spoke in a Miami church the other day, and in Spanish, no less.

Let it not be lost on anyone that the top of the Republican ticket does not seem fond of Spanish-speaking folks, or of immigrants in general. The angry words spewing from the right have splashed into every corner of the nation and inarguably caused deep grief among, even violence against folks who are just trying to earn a living.

The American Spanish language television network Univision some time ago blamed violent language for spiking anger against Hispanics. It seems to be true. Recently, a local gardener told me someone cut off his truck on the road, the driver screaming that the gardener was a %#!! Puerto Rican and that he should go back there. For the record, the gardener came from El Salvador forty years ago, and is a U.S. citizen.

Then there were the berry pickers scammed by two men who sold them phony rights to pick in a field in Okeechobee, Fla. The berry pickers lost their $40 or $50 each to the scammers, spent a night in jail, and are still waiting to get their bail money back. Their cases were dismissed, but the rich ranch owner, Boca Raton socialite Elaine Johnson Wold, ended up with $4,425.20 when her ranch manager sold the berries.

It is not only Spanish-speaking immigrants who are ripped off, mistreated and abused by both civilians and the system. In Garden City, Kan., police stopped three men who planned to bomb an apartment complex called Garden Spot, home to 120 Somali immigrants. The archbishop of Indianapolis had to face off the governor, who happens to be running for vice president and who didn't want Catholic Charities to help resettle Syrian refugees in Indiana.

And it's not just in the United States that the melting pot has turned into a witches' cauldron. All over the world, refugees are trying to find not so much a better life, just a life. In Sweden a band of masked men handed out leaflets recommending violence against immigrants. Complaints fill the air in Germany, in Italy, even in Canada.

As the worldwide anger against displaced individuals and families reaches epidemic proportions, clear dividing lines continue to appear between the haves and the have-nots. The righteousness of some current political rhetoric slams up against itself, creating a sludge of hate impossible to wash off. And precious little is done to dry the tears of those hungry and alone, homeless and on foot around the world.

We know all about sticks and stones and especially about words, which theoretically at least cannot hurt you. However, today words fuel an anger that propels bombs and fists across real or imagined divides, although in every case the weaponry seems directed at folks a little or a lot tanner than the perpetrators.

A lot of that anger is caused by politicians who are just not welcome in churches.

[Phyllis Zagano is senior research associate-in-residence at Hofstra University in Hempstead, N.Y. Her most recent books include The Light of the World: Daily Meditations for Advent and Christmas, Women Deacons? Essays with Answers and In the Image of Christ: Essays on Being Catholic and Female.]