Aide: Francis aims for those on life's 'garbage heap' 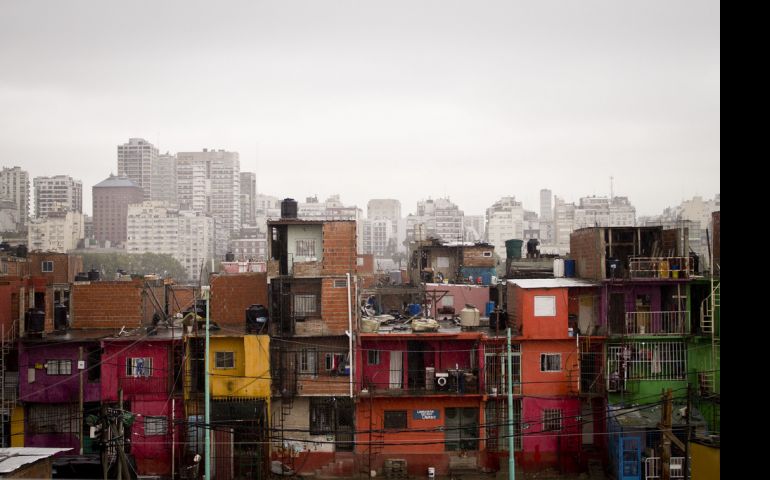 One of the large shantytowns in Buenos Aires known in Argentina as a 'villa miseria'
This article appears in the Pope Francis feature series. View the full series.

Buenos Aires, Argentina – In some ways, Federico Wals had a curious job for the last six years as the spokesperson and media coordinator for Cardinal Jorge Mario Bergoglio of Buenos Aires, a prelate who rarely gave interviews and who was famous for preferring to let his deeds do his talking.

At one level, those traits meant Wals didn’t have a lot to do. He said that Bergoglio gave maybe seven interviews inside Argentina over the last six years, and perhaps two or three in Rome. No matter how punctilious one might be about the details, arranging fewer than ten interviews over that span of time isn’t anyone’s idea of a full-time gig.

On the other hand, Bergoglio’s reluctance to talk about himself meant someone else had to do it for him, a responsibility that often fell to Wals. As a result, the 32-year-old layman arguably had more opportunities over the years to think about who Bergoglio is, and what he was trying to achieve, than most other people either inside or outside the Catholic church.

Wals sat down on April 3 for an interview in his modest office at the headquarters of the Buenos Aires archdiocese, immediately next to the cathedral in the Plaza de Mayo.

The interview took place in Spanish, through an interpreter, and the following are extracts.

What was Cardinal Bergoglio’s core aim in Buenos Aires?

He wanted to promote the idea of a missionary church, a church that gets out into the streets. His vision was for the church to reach out to those who have been tossed onto a sort of existential garbage heap. He was especially concerned for those about whom society didn’t seem to care, such as single mothers, the poor, the elderly, the unemployed. His main concern was how to get the church to move towards those who need it the most, who aren’t perceived as ‘useful’ by society. He wanted the church to make them a priority.

Concretely, how did he do that?

He was fond of saying that we already have plenty of theory about what the church should do, so let’s put it into practice. He formed a large network of people who were already working in the areas that were his priorities. For instance, he’d take a priest and move him into the shantytown areas so he could get to the schools, the soup kitchens, the churches, all of the major institutions serving the people there. He’d send the priests into these areas to be a resource for the other people who were already working there. He wasn’t interested in theory, but in concrete practice.

He used to joke that we need to learn from the model of the Evangelicals, meaning that we have to knock on doors and talk to people. He also wanted to make the church visible outside its buildings, which is why Buenos Aires developed some very interesting outdoor events. For instance, the Via Crucis procession during Holy Week moves through the entire city, going on for miles and miles. There are also lots of open-air Masses. The most important Masses here don’t take place inside the cathedral, but in the square.

Where did the laity fit in to this vision?

It wasn’t just about priests doing the job. He was also concerned with getting the laity active inside these movements, and letting them take charge. Priests were just one leg of the stool, along with the religious and the laity. He felt that if you didn’t do it that way, you end up with a church that’s too focused on itself, and it shouldn’t be that way. It’s not just about what priests do, but above all the laity.

To use political language, one could say that he transformed the idea of taking the church into the streets from a policy of government into a policy of state. That is, he wanted it to become a permanent feature of what the church is about that doesn’t depend on who happens to be in charge at any given time.

Which groups in society did he target?

He came up with the concept of an “urban pastoral plan.” It focused on three main concerns: human trafficking; reaching out to the slums and shantytowns, especially with regard to the youth and threats such as drugs; and supporting the cartoneros, meaning poor people in Buenos Aires who sort through the city’s garbage every night to make a living off finding recyclable materials. Bergoglio helped them to form a union and to turn this work into an actual career, something from which one can make a living. He wanted to help these people to protect their rights.

The slums are extremely important to Bergoglio, and to the church in Argentina. Forty-four percent of the people living in the slums are under 16 years old, so it’s critically important to ask how we can reach all those young people. How do we keep them off drugs and alcohol, and out of gangs and violence? These projects were usually worked out and developed in partnership with the government, at different levels, and with various social movements and NGOs.

He was at the table when decisions about these projects were made?

Yes, always, with everything.

What can you tell me about the perception that Bergoglio had a rocky relationship with the government of Cristina Kirchner?

There are two sides to that story. The first is the personal animosity the Kirchner household seemed to feel, and the other is the different relationship that more or less everyone else in the government had with Bergoglio and the church.

In truth, there are plenty of government ministers who came here to talk to Bergoglio about human trafficking, about poverty, about trying to channel government funds for urban development through Catholic charities because they know it will be done well. Sometimes, ministers and other politicians aligned with the government actually have come to the church to offer funds to rebuilding crumbling churches. That happened at the Church of San Ignacio, for instance, which in many ways was Bergoglio’s church, the Jesuit church in Buenos Aires. There’s a minister in Argentina famous for being the right hand of Christina Kirchner, yet he brought money to the church and said you have to fix San Ignacio, because we can’t have it falling down. He’s actually a very faithful Catholic, a daily Mass-goer.

So is the whole government at war with the church? No, not really.

Would you describe Bergoglio as conservative, liberal or moderate?

Bergoglio once told me he didn’t understand why people from the right complain about him being on the left, while people from the left complain about him being on the right. He said, ‘I’m trying to a bishop of the center, who talks to both parties and takes the best from each.’ He's a keen observer of reality, and was much more interested in talking about concrete situations than ideological theories. As part of that picture, he was always open to talking with anyone. He would send emissaries to all the different political factions, to find out what they were thinking and how he might be able to talk to them.

How was Bergoglio as a manager of money?

The first thing he did was to personally take of business. He then turned things over to a bishop he trusts the most, [Joaquín Mariano] Sucunza [auxiliary bishop of Buenos Aires].

One of the biggest decisions Bergoglio made, which is one he may make in the Vatican too, was that everything financial would be handled through private banks. Before Bergoglio, the archdiocese actually owned shares in private banks. What he did was to sell these shares and he took that money and put it back into the bank, not as an owner but a customer. When we were partially owners of those banks, we had the same issues as the Vatican Bank has today. It was a black hole, meaning there were no limits on what the church could borrow and spend. The church started putting its money into international banks, such as HSBC and UBS, as a normal client.

Do you think he’ll close the Vatican Bank?

Yes, I believe so. I think he will move everything to the Bank of Italy.

You were the cardinal’s spokesperson for seven years. How many media interviews did he do during that time?

That wasn’t the problem. He values the press quite a lot, because he knows that the church needs journalists to get its message out. In terms of interviews, he believed that every single journalist should be treated the same way, and because so many wanted to talk to him, he basically turned them all down. Once a year, after the Holy Thursday Mass, he’d come out and greet all the members of the press who were there and talk to them for fifteen or twenty minutes. That was his one press conference every year. In Rome over the years, I think he only gave three interviews. He was comfortable, however, talking off the record, and he did that a fair bit. He’ll probably have a few journalists in Rome with whom he’ll be willing to talk off the record from time to time.

That’s a good question. I’m not sure there is anybody to call, other than him.

There’s nobody who can speak about what’s in his mind on almost everything?

No, at least not right now. There really wasn’t such a person here.

He’s his own right hand?

Here in Buenos Aires, during all the time he was an auxiliary bishop, then coadjutor, and then archbishop, he still remained a priest of the barrio, with everything that means. Now as pope and bishop of Rome, he’ll think of himself as a priest of Rome. That’s what living in the Casa Santa Marta is about, for instance. Even when he performs his functions as pope, he’ll do it in the style of a priest. When he has to talk to Obama, for instance, he’ll probably make the call himself rather than going through intermediaries.

Have you ever seen anyone able to manipulate him?

He’s not easy to manipulate, that’s for sure. Whenever someone tried, he’d pick up the phone and ask opinions from different people and get different points of view, and then he’d make his own decision.

Aide: Francis aims for those on life's 'garbage heap'

On the pope's 'mystical moment': something did happen