Benedict's post-papal life thanks to nuns 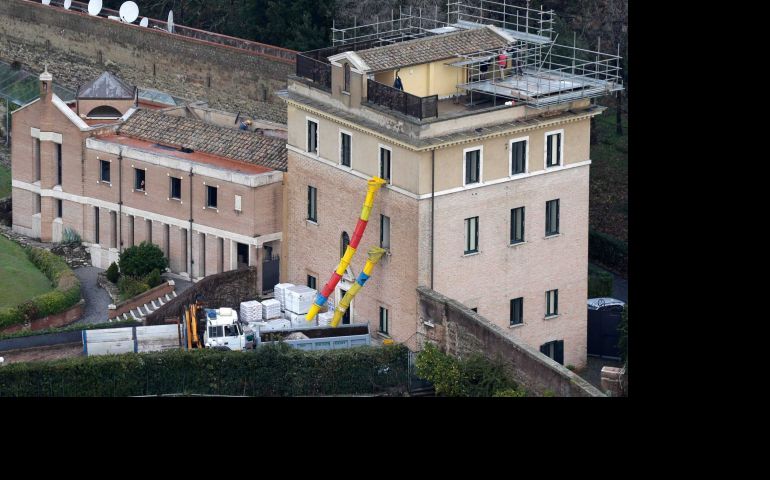 The 'Mater Ecclesiae' convent on Vatican grounds
This article appears in the Benedict Resigns feature series. View the full series.

Rome — Famously, the papacy of Benedict XVI has had a rocky relationship with religious women, especially in the United States. An apostolic visitation of women's orders in America was initiated in 2008, and in 2012, the Congregation for the Doctrine of the Faith decreed a sweeping overhaul of the Leadership Conference of Women Religious.

His post-papal life, however, will in a certain sense be thanks to the nuns.

After a brief period at the summer papal residence at Castel Gandolfo, Benedict XVI plans to move into a former convent on the grounds of the Vatican, which is currently undergoing renovations to accommodate its new resident. It's the "Mater Ecclesiae" monastery, built out of what used to be the headquarters of the Vatican gendarmes.

In 1992, Pope John Paul asked that the facility be converted into an international convent for contemplative sisters, who would pray for the pope and the church. Over the last 20 years, the convent has hosted small groups of sisters from various orders, including the Benedictines, the Poor Clares and the Salesians (also known as the Visitandines). The last group to occupy the convent left in November 2012.

The convent has four floors, two of which contain 12 cells for the sisters who used to live there. There's also a kitchen, a refectory and a small infirmary, as well as a chapel. Part of the renovation currently under way is to install a library, an obvious concession to Benedict's passion for books. Outside is a garden with lemon trees, where the sisters used to cultivate fruits and vegetables using "green" techniques.

Benedict will also depend upon the generosity of women in another sense. His brother, 89-year-old Msgr. Georg Ratzinger, has confirmed that the four consecrated laywomen who belong to Memores Domini, part of the Communion and Liberation movement, who currently run his papal household will follow him to his new residence.

Benedict's post-papal life thanks to nuns

Life without parole for minimal drug possession is cruel