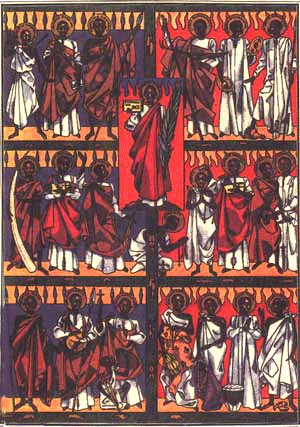 {{en|Saint en:Charles Lwanga (in the center) and his 21 followers in a picture from Albert Wider from the year 1962.}} [Public domain], via Wikimedia Commons

Did you know Catholics from Africa led the way in being witnesses for Christ in the face of grave persecutions?

Saint Charles Lwanga was one of the 22 Ugandan martyrs who converted from paganism. He was the chief of the royal pages and was considered the strongest athlete of the court. He was also known as “the most handsome man of the Kingdom of Uganda.” He instructed his friends in the Catholic Faith and he personally baptized boy pages. He inspired and encouraged his companions to remain chaste and faithful. He protected his companions, ages 13-30, from the immoral acts and homosexual demands of the Babandan ruler, Mwanga. He and his companions were burned to death by Mwanga’s order on June 3, 1886. Pope Paul VI canonized Charles Lwanga and his companions on June 22, 1964. We celebrate his memorial on June 3 of the Roman calendar. Charles is he Patron of the African Youth of Catholic Action.