Churches should be a sacred space, free from partisan politics 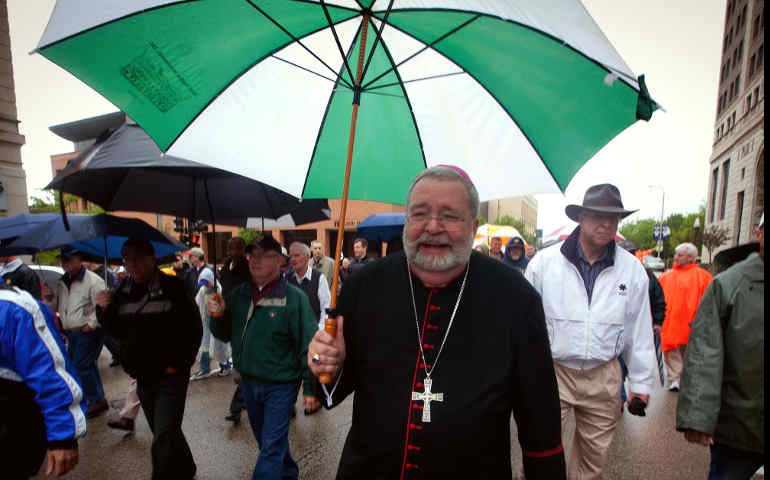 Bishop Daniel Jenky of Peoria, Ill., walks through downtown Peoria April 14 with more than 500 men during a "Call to Catholic Men of Faith" march shortly before preaching a sermon in which he compared President Obama to Hitler and Stalin. (CNS)
This article appears in the Election 2012 feature series. View the full series.

Bishop Daniel Jenky of Peoria, Ill., just can't seem to stay out of politics. On April 14, he gave a sermon in the cathedral in Peoria in which he compared the president of the United States to, among others, Hitler and Stalin. He has now just come out with an order to all his priests, under their vow of obedience to him, to read a highly political letter from the pulpit this Sunday before the election. I will leave apart the very serious question about whether this is the proper use of  canonical obedience, but would point out to Jenky that his theory of obedience, which reduces his priests to automatons under his control, is not very respectful of their personal dignity. It is also the type of episcopal over-reach that allows plaintiffs' lawyers to argue that bishops are legally responsible for everything their priests do. And we know how many hundreds of millions of dollars actions like that have cost the church.

Jenky's letter is a non-endorsement endorsement of one party's candidates in the elections next Tuesday, filled with highly tendential "facts." Jenky appears not to know that the contraceptive regulations of the Department of Health and Human Services that he complains so bitterly about have already been modified once to exempt Catholic-affiliated institutions -- such as colleges, universities and hospitals -- and that future modifications to take care of the issue of Catholic self-insured organizations are in the works. He also seems to buy the notion that the only way to fight the evil of abortion is to make it illegal.

As a result of Jenky's command, Catholics in Peoria on Sunday will be exposed to a partisan political rant in order to attend Mass. That's just wrong. Our churches should be sacred spaces, free from any whiff of partisan politics. The Lord, in the Eucharist, welcomes all of those in the state of grace, despite their political affiliations. And making people feel unwanted in church because of the political party they belong to is a sure way to empty our already sparsely populated pews.

Jenky is among those bishops who would say that while we Catholics may use our prudential judgment in designing solutions to the social justice issues, issues like the federal budget and its support for the least among us, or issues like racial justice and immigration, we may not use that same prudential judgment in designing solutions to the life issues, that the only way to address the life issues is to legislate the church's views into law. This is the view that Jenky propounds in his letter, that there is only one legitimate application of the church's teachings on the life issues, namely coercive laws that enforce the church's teachings. But this is a classic case of begging the question. It assumes what has to be proved. It is by no means self-evident to me that the only way to deal with the life issues is legal prohibition. I am opposed to any act that devalues life. That is my moral obligation as a Catholic. But that does not relieve me of my further obligation to use my prudential judgment to decide the best, the most effective political and legal way to do that.

As a faithful Catholic with knowledge of these facts, I think I can use my prudential judgment to reject the false god of legal prohibition and vote accordingly. I can also assess a partisan bishop's letter read from the pulpit under obedience for what it is: an attempt to override my informed conscience by a one-sided phrasing of the issues. Where in Jenky's letter is the concern for the poor that is essential to the Christian message? It, like Jenky's obligation to exercise his episcopal office without mixing in his politics, is missing in action.

[Nicholas P. Cafardi is a civil and canon lawyer and a professor and former dean at Duquesne University School of Law in Pittsburgh. Cafardi is a co-chair for the "Catholics for Obama" campaign.]

Will Biden-Ryan debate be a 'Catholic smackdown'?

Politics | Churches should be a sacred space, free from partisan politics

Editorial: Move forward to health care for all