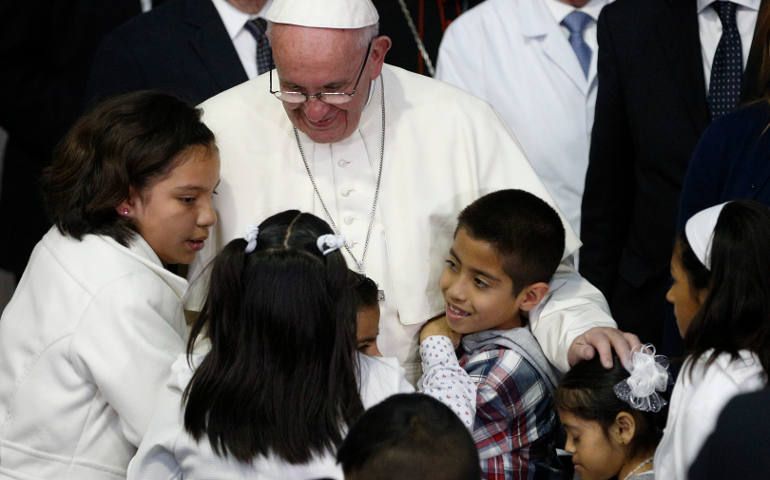 Mexico City — Pope Francis ended his second full day in Mexico with one of his most endearing pastoral exercises, visiting children in hospital -- many of them gravely ill, some of them waiting for transplant surgery.

Francis arrived at the Federico Gomez pediatric hospital at about 5 p.m. local time, almost 30 minutes ahead of schedule. He was greeted by Mexican First Lady Angelica Rivera, who introduced him to many of the children.

After visiting with 38 children one-by-one in an oncology ward -- kissing, hugging, and handing each child a rosary -- the pope made brief remarks on the need to express gratitude and give blessing to others.

"Entering here and seeing your eyes, your smiles, your faces, has filled me with a desire to give thanks," said Francis.

"And at the same time, I wish to bless you," he continued. "I ask God to bless you, and to accompany you and your families, and all those people who work in this home and try to ensure that your smiles grow day by day."

Following his remarks, Francis again went around meeting children one-by-one. In one memorable moment, he took five-year-old Rodrigo Lopez Miranda in his arms and helped a doctor administer some medicine on the child's tongue.

In another moment, one young woman wearing a blue head wrapping spoke intently to the pontiff for several moments. Alexia Garduno Aladro then broke into a full rendition of the Ave Maria, with Francis smiling and hugging her as she finished.

Pope John Paul II had visited the same hospital on his first trip to Mexico in 1979. Founded in 1943, the hospital is well known throughout Central and Latin America for its care. It has trained some 8,000 pediatricians over the years.

Some of the pope's visit was recorded by photo and video journalists, but part of the visit was done without media present.

Religious freedom is under attack around the world