Skip to main content
This story appears in the Francis in Latin America feature series. View the full series. 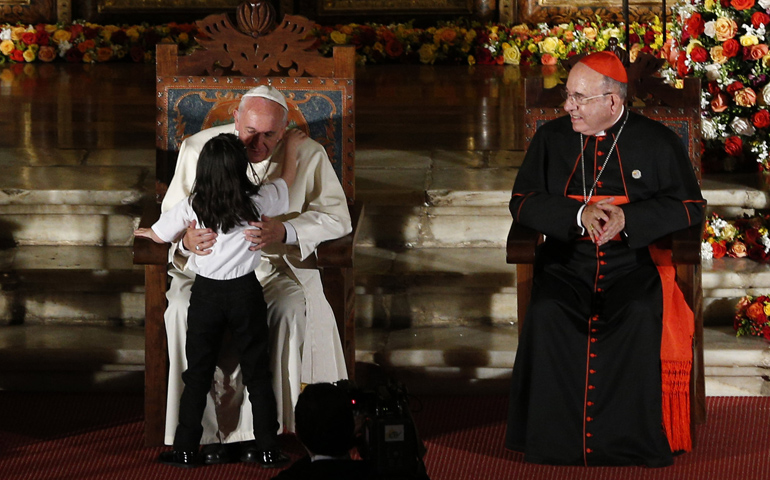 Pope Francis embraces a girl during a meeting with representatives of civil society Tuesday in the Church of St. Francis in Quito, Ecuador. At right is Ecuadorean Cardinal Raul Vela Chiriboga. (CNS/Paul Haring)

Pope Francis has strongly reaffirmed his recent environmental encyclical letter Laudato Si', telling students and teachers in a moving visit to the Catholic university here that ecological care can no longer be just a recommendation but a requirement.

In words many have been waiting for during the pontiff's three-day visit to a country bordering the Amazon rainforest, Francis told those at the Pontifical Catholic University of Ecuador "one thing is clear."

"We can no longer turn our backs on our reality, on our brothers and sisters, on mother earth," the pope continued. "It is no longer licit for us to ignore what is happening to our surroundings as if certain situations did not exist or have nothing to do with our reality."

"Again and again comes the strength of that question of God to Cain: 'Where is your brother?'" he said. "I ask if our response continues to be: 'Am I my brother's keeper?'"

With such a strong reference to the Old Testament story of Cain's slaying of his brother Abel, Francis appeared to be forcefully saying Tuesday that humanity is destroying the Earth but is not taking responsibility for the destruction.

The pontiff's remarks may also carry special significance for many in Ecuador, where public debate has been sparked by President Rafael Correa's plan to open resource mining in an internationally recognized nature reserve on the country's eastern border with Peru.

In a meeting later Tuesday with members of Ecuadorian civil society, Francis touched upon the mining issued much more directly.

"Exploitation of natural resources, so abundant in Ecuador, must not seek immediate benefit," he said at that meeting, held at Quito's 16th-century Church of St. Francis.

"Being administrators of this richness we have received, we have an obligation towards society as a whole and towards future generations, to which we cannot hand down this heritage without a proper care of the environment," he told those at that event.

The pope told the students and educators at the Catholic university that God gave humanity a mission by asking it to care for the environment.

"He invites us to be part of his creative work and he says: 'Cultivate! I am giving you seeds, soil, water and sun; I am giving you your hands and brothers and sisters,'" said the pontiff.

Creation, said Francis, "is a gift to be shared."

Francis, the first pope from the Americas, has been visiting Ecuador since Sunday as part of a weeklong sojourn that will also see him visit Bolivia and Paraguay.

Public reaction to the pontiff's visit has been overwhelming, with two Masses celebrated by Francis Monday and Tuesday each attracting crowds of over a million people. Many have been camping out, or traveling extreme distances, to chance an in-person view of the pope.

Ecuadorian debate has focused on president Correa's plan to allow mining operations in Yasuni National Park, a 2.5 million acre large nature preserve that has been called one of the most biologically diverse places on Earth and is also home to several uncontacted indigenous tribes.

Several local Catholic leaders said they had written letters to Francis, asking him to address the issue in his private meeting with Correa Monday afternoon.

Maribel León, an Ecuadorian who is the coordinator for missionary formation for the Quito archdiocese's Pontifical Mission Societies, said the pope could point to his encyclical "to make our government understand that what [Correa] is doing to our environment is not positive."

Correa, León said, is "taking our natural wealth, changing it for a financial wealth and eliminating the peoples' living there."

Francis told the civil society leaders Tuesday that the goods of the Earth "are meant for all and even though some might claim property, they are always under a social mortgage."

"Thus the concept of economic justice, based on the principal of commerce, is superseded by the concept of social justice, which upholds the fundamental right of people to a dignified life," he said.

With the educators and students Tuesday afternoon, Francis called on both groups to take specific actions to care for environment. He asked educators to teach students a critical sense to care for the world and students to use their studies to express solidarity with those less fortunate.

"It is urgent that we keep reflecting on and talking about our current situation," the pope told all present. "We need to ask ourselves about the kind of culture we want not only for ourselves but for our children and our grandchildren."

"We have received this earth as an inheritance, as a gift, in trust," he continued "We would do well to ask ourselves: What do we want to leave behind? What meaning do we want to give to our lives? Why have we been put on this world? For what do we work and fight?"

"As a university, as educational institutions, as teachers and students, life challenges us to respond to the questions: 'What does this world need us for?' 'Where is your brother?'" said Francis.

The pope also spoke with the members of civil society about how different types of people can work together.

"The respect for others which we learn in the family finds social expression in subsidiarity," he told the leaders.

"Assuming that our choices are not necessarily the only legitimate ones is a healthy exercise in humility," said Francis. "In acknowledging the goodness inherent in others, even with their limitations, we see the richness present in diversity and the value of complementarity."

"Individuals and groups have the right to go their own way, even though they may sometimes make mistakes," the pope said.

The pontiff is to meet on Wednesday morning with Ecuadorian clergy and religious before heading on to Bolivia.