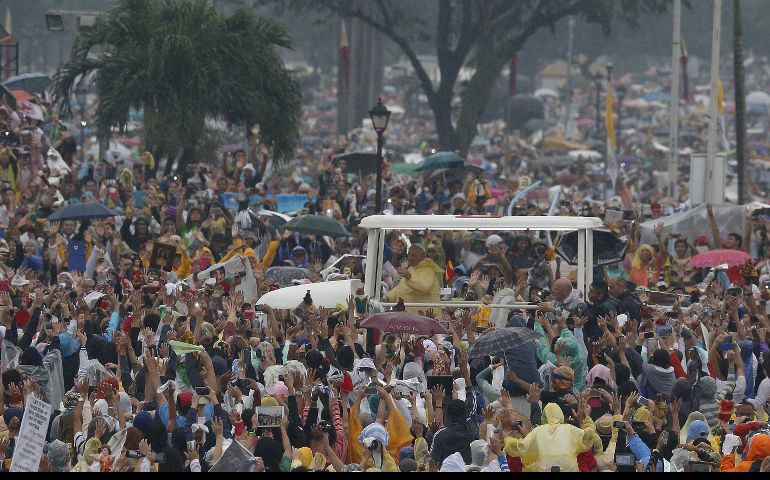 Manila, Philippines — Addressing a record-setting millions of Filipinos under pouring rain in his last public appearance during his four-day trip to the country, Pope Francis called on them to be "outstanding missionaries of the faith" to Asia.

Speaking Sunday during a homily at an open-air Mass in Manila's Rizal Park, Francis also asked them to protect the family against what he called "insidious attacks."

Using the example of St. Joseph, who he called the "protector" of Jesus, Francis said the saint "reminds us of the importance of protecting our families, and those larger families [which] are the church, God's family, and the world, [our] human family."

"Sadly, in our day, the family all too often needs to be protected against insidious attacks and programs contrary to all that we hold true and sacred, all that is most beautiful and noble in our culture," said Francis.

"We too need to protect, guide and encourage our young people, helping them to build a society worthy of their great spiritual and cultural heritage," he continued. "Specifically, we need to see each child as a gift to be welcomed, cherished and protected."

Vatican spokesman Jesuit Fr. Federico Lombardi said Sunday evening that the Mass was attended by 6-7 million people, who braved tropical storm conditions for a chance to celebrate with the pope.

"This is the largest event in the history of the popes," said Lombardi. "In a sense, the entire nation was here, around the pope."

The previous record for attendance at a papal event was estimated at 4 million, also set by Pope John Paul II during a papal Mass in Manila in 1995.

The Mass was the cap to a whirlwind and intense visit by Francis to the Philippines, a nation of about 100 million. The pope has been visiting the country since Thursday in the second visit of a two-part Asian voyage that first saw him visit Sri Lanka earlier in the week.

While the four day stay has been filled with dramatic moments -- including a visit Saturday into a tropical storm to the area of the country most affected by 2013's Typhoon Haiyan -- the Mass Sunday seemed to go off without any organizational hitches and Francis homily was rather succinct.

Reflecting on the child Jesus, who Filipinos were celebrating Sunday with the feast of Santo Niño, Francis said that all Christians are "adopted children, brothers and sisters in Christ."

"This is who we are," he said. "This is our identity. We saw a beautiful expression of this when Filipinos rallied around our brothers and sisters affected by the typhoon."

In one brief oblique reference to environmental destruction, Francis also said that God "created the world as a beautiful garden and asked us to care for it."

"But through sin, man has disfigured that natural beauty," he continued. "Through sin, man has also destroyed the unity and beauty of our human family, creating social structures which perpetuate poverty, ignorance and corruption."

Thanking Francis for his visit to the country at the end of the Mass Sunday, Manila Cardinal Luis Tagle said Filipinos Catholics promised they would pray for the pope as he leaves the country.

"You arrived in the Philippines three days ago," said Tagle. "Tomorrow you will go."

"Every Filipino wants to go with you -- not to Rome -- but to the peripheries," he continued. "We want to go with you to the shanties, to the prison cells, to hospitals, to the world of politics, finance, arts, sciences, culture, education, and social communications."

"We will go to these worlds to bring the light of Jesus, Jesus who is the center of your pastoral visit and the cornerstone of the Church," said Tagle.

Before the Mass Sunday, Francis had an emotional visit with some 30,000 Filipino young people, where he spoke extemporaneously for 40 minutes on the nature of suffering, love, and service.

Addressing a 12-year-old girl who recounted growing up in extreme poverty, Francis said "certain realties in life we only see through eyes that are cleansed through our tears."

In one sign of the massive operation to prepare for Sunday's Mass, officials from the Catholic Bishops’ Conference of the Philippines on Saturday night celebrated an earlier Mass and consecrated 2.5 million hosts for distribution Sunday from 20 tents among the crowd.

Church is called to persevere in mission of welcoming all, pope says