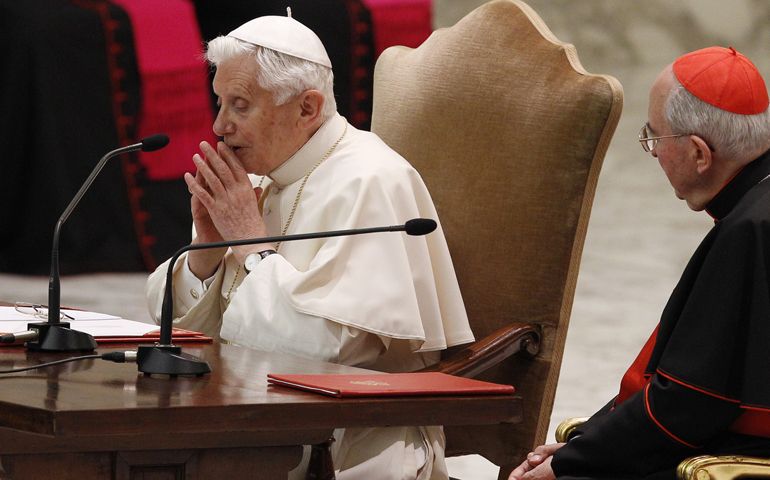 Pope Benedict XVI speaks during an audience with priests of the Diocese of Rome in Paul VI hall at the Vatican Feb. 14. At right is Cardinal Agostino Vallini, papal vicar of Rome. (CNS/Paul Haring)
This article appears in the Benedict Resigns feature series. View the full series.

Rome — A pope is also the bishop of Rome, and on Thursday, Benedict XVI had his last encounter with the clergy of his diocese in a packed session with the priests of Rome staged in the Vatican's Paul VI audience hall.

It was a long-planned encounter to talk about Benedict's experiences at the Second Vatican Council (1962-65), where the young Joseph Ratzinger served at all four sessions as a theological expert. In the context of the last 72 hours, however, it also became an emotional send-off for the first bishop of Rome in centuries to renounce his office.

Seated at a table on the hall's stage, Benedict spoke extemporaneously, without a prepared text. He began by thanking the clergy for their support.

"Even if I now withdraw myself, I'll stay close to you just as I'm sure you'll be close to me," Benedict said, "even if I remain hidden for the world."

It was a remarkable session, with Benedict displaying an informality and sense of humor rarely seen in public.

The pope recalled that when he was a young theologian, Cardinal Joseph Frings of Cologne asked him to help prepare a speech laying out a vision for Vatican II, which set out a program for reform. Frings later brought Ratzinger with him to Rome, and as they approached the Vatican for a ceremony, Frings was nervous that his speech may have gone too far.

"This may be the last time I ever wear the purple," he told Ratzinger, meaning that perhaps he'd be deposed as a bishop.

Instead, Benedict said, Pope John XXIII embraced him and said, "Your Eminence, thanks for your speech. You said exactly what I wanted to, but I couldn't find the words."

That anecdote brought laughter and applause across the hall.

Benedict went on to recall other memories from the council, including meetings with various lions of the conciliar period -- theologians, prelates and other luminaries.

"It was an experience of the universality of the church and the concrete realities of the church, which aren't simple," he said.

Benedict's overview of how Vatican II evolved basically summarized the highlights of most standard histories. The best-prepared beforehand, he said, were the bishops of France, Germany, Belgium and Holland, and they took control of the council's early stages, setting the stage for the reforms to come. The opening act was formed by debates over the liturgy, building on a renewal that had started under Pope Pius XII, which opened on to other subjects.

"I was happy it began with the liturgy, because that way the primacy of God was made clear," Benedict said.

"The first substantial act was to talk about God and the adoration of God in the communal liturgy centered on the body and blood of Christ."

Benedict went on to sketch some of Vatican II's big ideas on the liturgy:

The pope said a permanent formation is needed to truly grasp what "intelligibility means."

Benedict then turned to Vatican II's teaching on the church, saying that the post-World War II period brought a renewed focus on the church in Catholic thought.

"The church is not an organization, something to structure institutionally, but an organism. It's a vital reality, something that has to enter into my heart," he said.

Benedict noted the irony that the idea of "we are the church" also grew up in this context. That phrase has been used by some of Benedict's fiercest critics on the Catholic left; "We are Church" is the name of Europe's largest Catholic reform movement.

Yet Benedict insisted that it doesn't refer to "some group that declares itself to be the church," but rather to the personal insertion of believers into the greater community of the church.

Benedict turned to the topic of collegiality, meaning shared authority in the church among the bishops rather than being exclusively concentrated at the top.

'Sometimes it's been seen as a power struggle," he said, "but in reality, it's a matter of complementarity." He said there should be a balance.

Benedict also reflected on the term "People of God," saying the council meant to link it with the concept of communion, which finds its highest expression in the Eucharist.

Turning to divine revelation, Benedict said debates over the relationship between scripture and tradition were "conflictual." Bible scholars, he said, wanted more freedom to explore the texts without being subjected at every turn to the magisterium, meaning the teaching authority of the church.

"The church is the living subject of scripture," he said. "Without the church, scripture is just a book open to diverse interpretations and can't offer a last word with clarity."

Benedict expressed admiration for the "delicacy" with which Pope Paul VI tried to strike a balance during the council, helping to navigate its tensions.

Benedict recalled from memory the Latin formula on revelation that the council adopted.

Today, the pope said, biblical exegesis tends to read the Bible apart from the church, relying solely on the historical-critical method. Instead, he said, it must be read from within the church and in the light of faith.

"There's much to do to arrive at a reading truly in the spirit of the council," he said.

On ecumenism, Benedict said the push for Christian unity seemed an obvious priority, "above all after the passion of Christians during the time of Nazism."

Benedict said that in the later stages of the council, bishops from other parts of the world played a stronger role. The Americans, he said, were especially involved in the push for recognition of religious freedom.

"We can't go home without a declaration on religious freedom in our bags," the pope recalled his American colleagues saying.

The pope also described the tensions inside Vatican II over the document on relations with other religions, Nostrae Aetate.

Cardinal Agostino Vallini, vicar of the Rome diocese, greeted Benedict, telling him that the Roman clergy reacted to his decision with both "sadness and respect," as well as "admiration and regret."

Clearly emotional, Vallini said they "truly love" the pope and promised to pray for him.

Benedict ended by lamenting the way the council was sometimes popularly understood.

"The council for journalists was set in the categories of the media of today, the categories of politics. It was seen as a power struggle, and it was natural that they took the side of those positions closest to the world they live in."

Specifically, Benedict cited ideas such as decentralization of the church, more power to the bishops, and the phrase "People of God" as shorthand for greater power for the laity, as points that loomed large on this agenda.

Benedict suggested that media presentations of the council often led to misinterpretations and excesses.

"This council of the media was accessible to everyone, and it created many problems. It created many miseries ... seminaries closed, convents closed, the liturgy banalized. The real council had great difficult being realized, because the virtual council was more powerful.

"Fifty years after Vatican II, we see how this virtual council burst things apart," he said. "We have to work for the real council, with the Holy Spirit, to be realized."

Obama, the Bishops, and the Politics of 'Usurpation'