Jesuit parish in Havana hopes for unscheduled visit by Francis 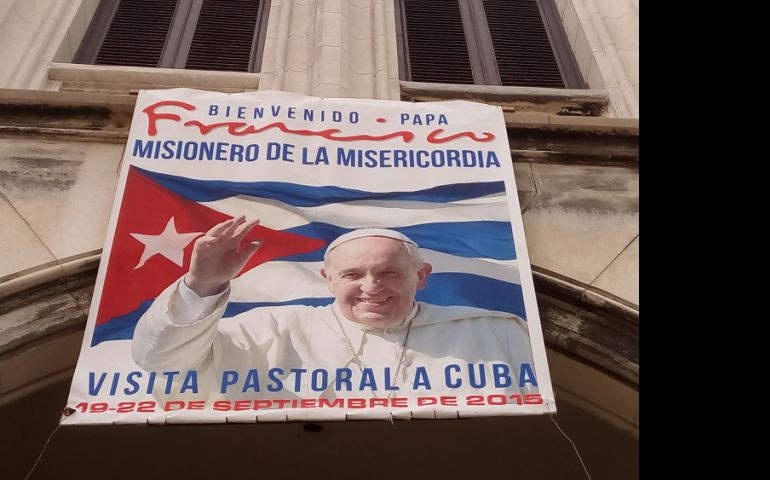 A sign outside Havana's parish of the Sacred Heart of Jesus and Ignatius of Loyola welcoming Pope Francis to Cuba. (NCR photos/Joshua J. McElwee)
This article appears in the Francis in Cuba feature series. View the full series.

HAVANA, CUBA — Parishioners at one Jesuit-run parish in a more rough-and-tumble neighborhood here are hoping that Pope Francis might make an unscheduled stop-in Sunday on his way to visit with Cuban President Raul Castro.

Staff at Havana's parish of the Sacred Heart of Jesus and St. Ignatius of Loyola were mopping the floors of the expansive church in extraordinarily hot and humid weather Friday, just in case the pope does stop by.

Francis, who is a member of the Jesuit order, often makes stops to visit his brethren in Ignatian communities during his trips abroad. The parish is on the main street that Francis is expected to drive down in his open-air popemobile Sunday in order to greet crowds throughout Havana.

Jesuit Fr. Juan Miguel Arregui, the provincial of the order's Cuban province, said Friday that while the visit is not on the program it is possible.

The parish, known popularly as Iglesia de Reina, is notable for it's ornate gothic architecture and large tower, easily seen above surrounding buildings. It was first completed in 1923 and has a detailed wooden apse with a large statue of Jesus, his arms spread open to the world.

Parishioners have placed a large, person-sized corkboard in the lobby of the parish asking people to write down their messages to the pope, in case he does come in. Some have left incredibly moving hand-written testimonies on the sign, with one asking him to pray for jailed Cuban dissidents who "suffer in unhealthy prisons."

Francis, who has been credited by both the U.S. and Cuba for pushing forward talks that led to reestablishment of formal diplomatic relations between the two countries, is landing in Havana Saturday afternoon.

The pontiff will be visiting three Cuban cities through Tuesday morning before heading to the United States, where he will visit Washington, New York and Philadelphia.

An attendant at the Havana parish said Friday that she thinks of the pope as a father "who brings a lot of unity to the countries of the world."

"We hope that his visit will help us to be able to finish that work which he began with all the countries of the world," she said.

Arregui is also the director of the Loyola Center for Culture and Faith, an private organization located next to the parish that offers free educational classes for children and adults in Havana.

One of five such Loyola centers in different Cuba cities, the provincial said the Havana center is serving 1,000 students this year -- helping them learn everything from English, to computer skills, to how to manage small businesses.

The Jesuit said the center also offers programs for the elderly, and makes house visits to older people who have trouble getting out. He also noted that the center offers free snacks to many of the younger students, who otherwise might go hungry.

Jesuit parish in Havana hopes for unscheduled visit by Francis

Pay it forward for a nun who has changed your life