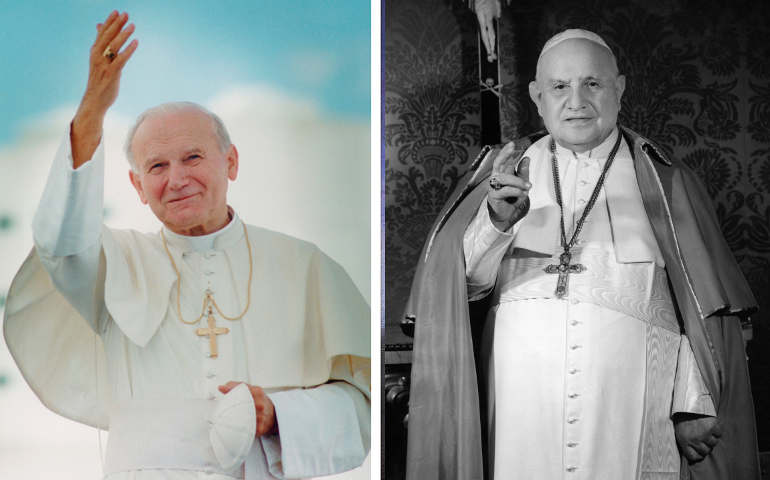 On the same day he released an encyclical partially written by one of his predecessors, Pope Francis also offered a remarkable sign of continuity with two others, confirming that Popes John XXIII and John Paul II will likely be canonized together within the year.

A Vatican spokesman said Friday that Francis will convene a consistory, or a gathering of cardinals, to set the date for a canonization ceremony in the near future.

Francis has approved a miracle attributed to John Paul II, which involved the healing of a Costa Rican woman from a severe brain injury, and apparently is willing to move forward with a sainthood declaration for John XXIII without waiting for the formal process of documenting a second miracle to reach conclusion.

With regard to John XXIII, a Vatican spokesman said Friday that because it's the 50th anniversary of the Second Vatican Council (1962-65) and because "no one doubts" the late pope's holiness, Francis has decided to go ahead.

John XXIII was beatified under John Paul II in 2000. As it happens, he was combined with another pope that time, too, beatified alongside Pius IX, the last pontiff to also be a secular monarch whose reign saw the loss of the Papal States in 1870.

Editor's note: Read more of Allen's analysis of the canonizations announcement here: Three things to learn about Francis from his sainthood surprise

The Vatican also announced that Francis has approved a miracle attributed to Msgr. Alvaro del Portillo, the successor of St. Josemaria Escriva as the head of Opus Dei, clearing the way for beatification of Escriva's successor.

In combining John XXIII and John Paul II, Francis may in part be attempting to breach the traditional left/right divide in Catholicism. Because of his association with Vatican II, John XXIII is generally a hero to the church's progressive wing while John Paul II is typically lionized by Catholic conservatives.

In effect, one way to read the decision to put the two popes together is as a statement that any attempt to set them at odds is artificial, and that what they had in common is more fundamental than any perceived differences.

While no date has yet been set for the canonization ceremony, media reports have suggested either October or early December as likely windows. Italian media reports pointed to Dec. 8, the feast of the Immaculate Conception, as a possibility.