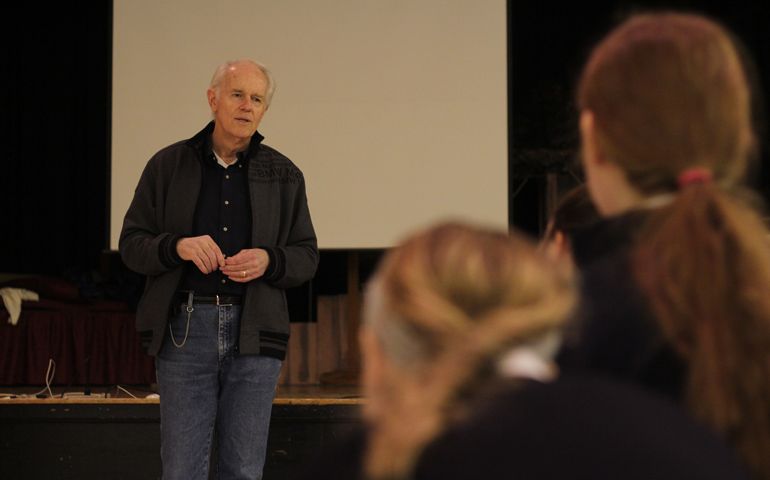 The presentation lasted for two hours including a question and answer session at the end. (NCR photo: Eloísa Pérez-Lozano)

Farrell spoke to about 45 students, mostly sophomores, on the importance of human dignity and its relevance to abolishing the death penalty.

"The death penalty is a bigger issue than just incarcerating and killing people," Farrell said. "When people are killed [in this system], we are saying that people are disposable, that some humans are less than others."

Farrell, a lifelong opponent of the death penalty and part of Human Rights Watch, said more often than not, those who are incarcerated and sentenced to death are poor and people of color. There have also been many cases when the accused have been found innocent after years spent in prison or after they have been executed.

The system is flawed and unjust, Farrell said.

"It is killing innocents; it is classist; and it is racist," Farrell said. "Plus, the death penalty doesn't act as a deterrent, like many argue."

Farrell quoted Brazilian educator Paolo Friere, who said, "To dehumanize another is to dehumanize ourselves."

"We should raise up others, not dehumanize them," Farrell said.

All sophomores at Notre Dame de Sion are required to take a religion course titled "Catholic Social Teaching." Themes discussed in the course include human dignity, preferential option for the poor, and social justice.

At the end of the talk, students were invited to ask questions.

"How do we make society better? How do we improve?" one student asked.

"We have to support organizations and activists, like St. Joseph of Medaille Sr. Helen Prejean, who recognize and embrace human dignity and want to put an end to a system that isn't working," he replied. "We have to tell people running for office that we do not stand for this system."

What we inherit and where we begin