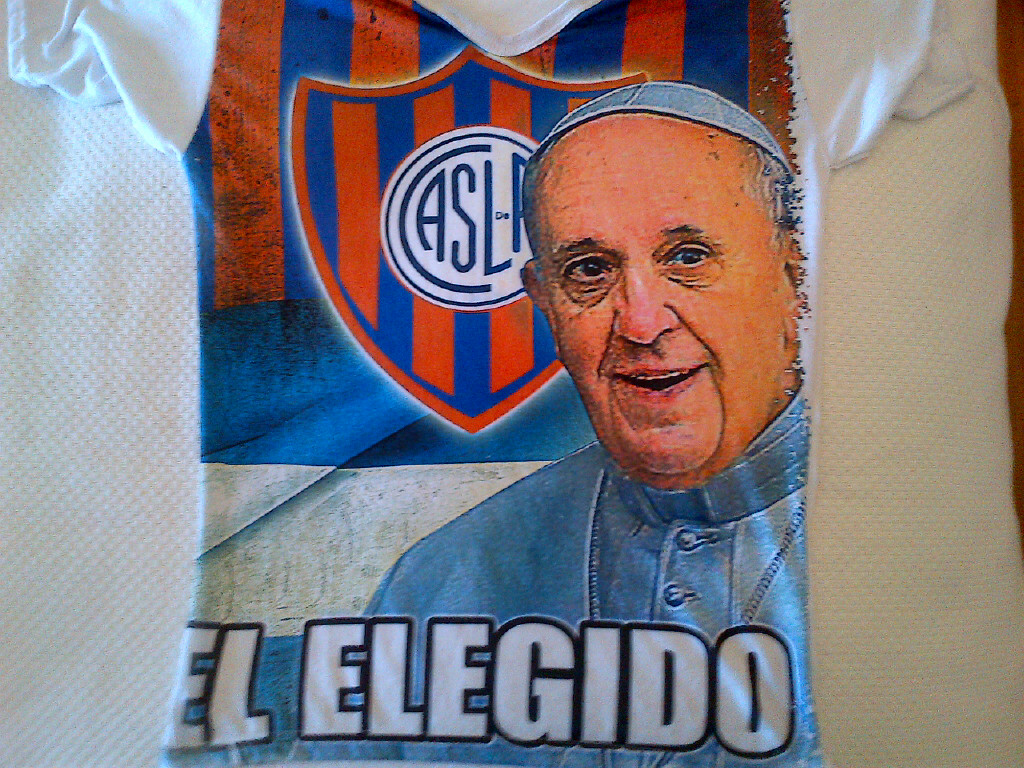 A t-shirt sold on the streets of Buenos Aires, showing Pope Francis with the colors of the San Lorenzo soccer team

Buenos Aires, Argentina – Under the heading of “it’s better to be lucky than good,” here’s the kind of happy accident that sometimes falls into the lap of a reporter.

I knew coming to Argentina that among other points on the biography of Cardinal Jorge Mario Bergoglio, the man who is now Pope Francis, is the fact that he’s a huge fan of the soccer club San Lorenzo. The team plays in the Primera División, which is the top flight of soccer in Argentina. (San Lorenzo is currently in 11th place in a 20-team field.)

Understandably, the team is fiercely proud of their most famous booster. On March 16, San Lorenzo actually came out for a match against Colón de Santa Fe with a picture of the new pope on the players’ jerseys. (For the record, they won 1-0 … enough said.)

En route to Buenos Aires, I thought it might be cute to track down someone from the club for a quick chat, but dismissed it as not worth the effort. As it turns out, however, the team actually stayed in my hotel Friday night for a Saturday match, and I bumped into the coach and several players while returning from a long day.

The coach, Juan Antonio Pizzi, told me he’s given countless interviews about the pope’s history with the club over the last three weeks, but he was thrilled to do it again – most other franchises, he said, would pay anything to draw this kind of interest, while San Lorenzo is getting it for free simply by riding the “Francis-mania” wave.

The interview took place in Spanish through an interpreter.

What does it mean to you to know you’ve got the pope as a fan?

In reality, I believe that the election of Francis as pope was a surprise to all Argentina, and for some people it was also a surprise to learn how just big a fan he is of San Lorenzo. It’s really nice to know that someone as important as the pope follows not just national soccer but our club, San Lorenzo. Everybody’s been talking about how the pope is a fan of our team, everybody!

Did he ever come to the games?

I’m told that the pope used to come to the games. He also used to celebrate Masses at the San Lorenzo chapel, for the team. He actually confirmed two of our players when they were in the junior leagues, while he was archbishop of Buenos Aires, and now they’re playing for the team. Today they’re 18 and 19 years old.

Does the team feel more pressure because they’re playing for the pope now?

No, I believe everyone’s really happy. We’ve been surprised and thankful at how much media interest there’s been in the situation. We’ve been in newspapers all over the world just because the pope follows us, which is great. It’s great publicity for our team and our players, and they’re thrilled about it.

Probably the most famous sports movie in American history is about the Notre Dame football team and a dying player named George Gipp, in which the coach tells his team: “Win one for the Gipper!” Have you thought about giving a speech in which you tell your guys, “Win one for the Pope!”?

Where are you in the season right now?

There are twelve games left in the season, and right now we’re fighting to make sure that we stay in the top league and don’t drop back to the next level down. That’s what we have to avoid … it’s impossible.

You can’t let the pope down, right?

We don’t want to let to let any of our fans down, and it’s important for the club to stay in the top league. Of course, it would be even more awful to know that the pope was disappointed!

Have you thought about telling the team that if they stay in the top league, you’ll take them to Rome to meet their most famous fan?

I don’t think we need any extra motivation, because trying to win games and stay in the top league is what every team, ever player, always wants. However, if the season ends well, and that’s certainly what we’re hoping for, there’s probably going to be a short trip to Europe, and we hope that we can add a stop in Rome to visit the pope.

Do you play in the month of December?

It’s the end of the season.

Plans right now call for Francis to come back Argentina that month. Would you like to invite him to a game?

Listen, I’m just glad he’s coming to Argentina. I imagine he’ll be way too busy to come to one of our games, but obviously, if he could, it would be a dream.