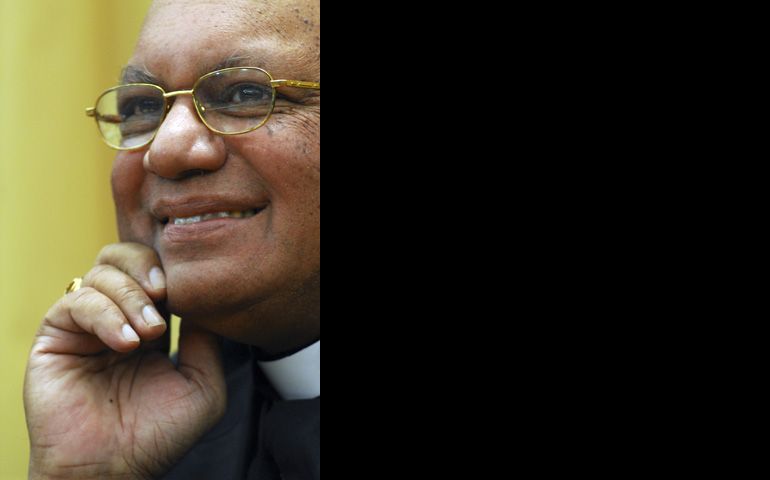 Heading into the 2013 conclave, there's a small set of candidates destined to get a serious look from the outset, such as Cardinals Angelo Scola of Milan, Marc Ouellet of Canada, and Odilo Pedro Scherer of Brazil. The buzz around those names ensures that most cardinals are thinking about them right now, three days before the balloting actually begins.

One could probably add two American names to that list, at least as measured by public clamor: Cardinals Sean O'Malley of Boston and Timothy Dolan of New York.

Then there's a wider range of figures who may not have strong support in the early rounds of voting, but who could come into play if none of the initial candidates seem to have sufficient support to get across that magic two-thirds threshold, meaning 77 votes out of the 115 cardinal electors.

In that second cluster waiting in the wings, there's an Asian possibility who hasn't yet received much attention, but who could strike some cardinals as an attractive fallback solution: Cardinal Oswald Gracias of Bombay (Mumbai) in India.

Gracias is also somebody who knows Rome well. He studied at the Pontifical Urbanian University and speaks Italian comfortably, he's a member of several Vatican departments, and he's close to the ubiquitous Community of Sant'Egidio.

Gracias is a figure with proven diplomatic skills and an ability to break logjams. He's been able to open channels of communication with Hindu leaders, including some radicals who stand on a platform of "India for the Hindus!", and he helped resolve a standoff with a fractious church group in Bombay, a situation a bit like the tensions over the Lefebvrist movement in Europe.

Ideologically, Gracias profiles as a moderate. In a recent interview in India, he opposed same-sex marriage but insisted that "gay persons are not to be rejected, but accepted," adding that he personally has no problem if priests with a same-sex orientation "come out," provided they respect celibacy.

He was also asked about the controversial case of Savita Halappanavar, an Indian woman who died in October 2012 in Ireland from a protracted miscarriage because doctors could not remove the fetus under Ireland's anti-abortion law. Gracias affirmed the church's opposition to abortion, but added that "doctors have to do whatever can be done to protect the mother. Maybe the child may not survive, but those steps need to be taken."

The streets of Rome may not be full of talk about Gracias, but his fellow Indians seem to be taking the prospect seriously. In the last few days, I've gotten feelers from media outlets in India asking about Gracias' prospects, and I've also received write-ups on him from friends and foes alike.

Kevin Coelho, for instance, is a childhood friend of Gracias who now lives in Canada. He sent along an impassioned essay as to why Gracias would make a great pope (or, perhaps, Secretary of State), arguing that the future cardinal's sharp mind was clear as a young seminarian: "You could often see our Spanish Jesuit professors become visibly nervous when he raised his hand to ask a question," Coelho recalls.

On the other hand, self-described Catholic apologist Michael Prabhu from Chennai shared a lengthy reflection on why none of the current Indian cardinals should be elected pope, Gracias very much included. In his view, they have all gone too far in accommodating India's religious pluralism, thereby watering down Catholic doctrine and practice. In particular, Prabhu is appalled that in his former diocese of Agra, Gracias approved teaching yoga at Catholic schools.

At 68, Gracias had a scare with cancer five years ago, and is visibly thinner than he was before the illness. Today, however, he's said to be cancer-free, and he keeps up a challenging work and travel schedule.

Gracias was born in 1944 in Mumbai, the child of parents who hailed from India's Goa region on the west coast. Gracias is thus a "Goan Catholic," referring to a fiercely proud group of Indian believers who trace their roots back to Portuguese missionaries in the 16th century. He studied at a Jesuit-run seminary and was ordained to the priesthood in 1970, in the immediate post-Vatican II period. Gracias studied in Rome from 1976 to 1982, earning a doctorate in canon law, and then returned to India to do a mix of pastoral and administrative work, including serving on a number of church tribunals and as president of the Canon Law Society of India.

The case for Gracias as pope pivots on three points.

First and most obviously, he would symbolize the dramatic growth of Catholicism outside the West. He might be seen as a "safe" choice for a non-Western pope, since he comes from a community in India that has five centuries of Catholic tradition under its belt and deep ties to Europe, Portugal in particular.

Second, a key issue in this race is governance, and Gracias has a proven track record as an effective governor. He keeps getting elected to leadership positions in Asia precisely because of his reputation as someone who can broker consensus and get things done.

Though Gracias profiles as a reconciler, he's no shrinking violet. In a recent interview with the Union of Catholic Asian News (UCAN), Gracias said of the next pope, "His is a tough job that invites criticism, so he should be thick-skinned."

Third, Gracias' image as a theological and political moderate could make him an attractive candidate for those cardinals who represent the ecclesiastical center – those who come out of the Vatican's diplomatic corps, for instance, as well as some Europeans. At the same time, Gracias would probably draw strong support from the cardinals from Latin America, Africa, and, naturally, Asia, should he emerge as a serious contender. Some Italian cardinals, especially those who know him personally, would likely find him acceptable given his comfort level with the language and the culture. Start running those numbers, and it's plausible that he could get to 77 votes.

Fourth, as Italian writer Vincenzo Faccioli Pintozzi has noted, Gracias could be the Karol Wojtyla of the 2013 conclave – an outsider from a linchpin nation with deep pastoral experience, who could resolve a deadlock. Certainly there's a case to be made that India is destined to play at least as central a role in the history of the early 21st century as Poland did in the late 20th century, and having an Indian pope could dramatically boost the Vatican's diplomatic capacity to engage rising Asian powers.

On the other hand, there are several strong reasons why Gracias has to be considered a serious longshot.

First, his bout with cancer raises questions about his long-term health. On the heels of a pope who just resigned citing age and exhaustion, the need for an "energetic" pope has become a buzzword among cardinals, which is often a sort of code for someone who doesn't bring any obvious problems of illness or frailty into the job.

Second, Gracias is a more effective behind-the-scenes figure than a public performer. That may help him in terms of the concern for governance, but cardinals are also looking for a pope who can carry forward the "New Evangelization," and may not see a canon lawyer with a reputation for quiet diplomacy as the best bet.

Third, precisely because Gracias has not figured prominently in the run-up to the conclave, many cardinals probably haven't given him a lot of thought. Given the hesitance many cardinals feel about rolling the dice on an unknown quantity, they may simply conclude they don't know enough about Gracias to take the chance.

Fourth, Gracias comes off more as a compromise possibility than someone with a natural base of support. Luis Antonio Tagle of the Philippines would be the preferred Asian candidate for those cardinals who want an evangelizing pope and a real breath of fresh air, while Malcolm Ranjith of Sri Lanka represents the great Asian hope among the "Ratzingerian" cardinals. No one seems to be making a conscious push for Gracias; instead, the stars would have to align in such a way that he represents a solution to a political stalemate.

In a crowded field with no clear frontrunner, however, such a stalemate isn't out of the question. If that's what happens, all sorts of possibilities may be one the table, including the idea of an Indian Pope.

Finding ways to be alone together is a new American pastime