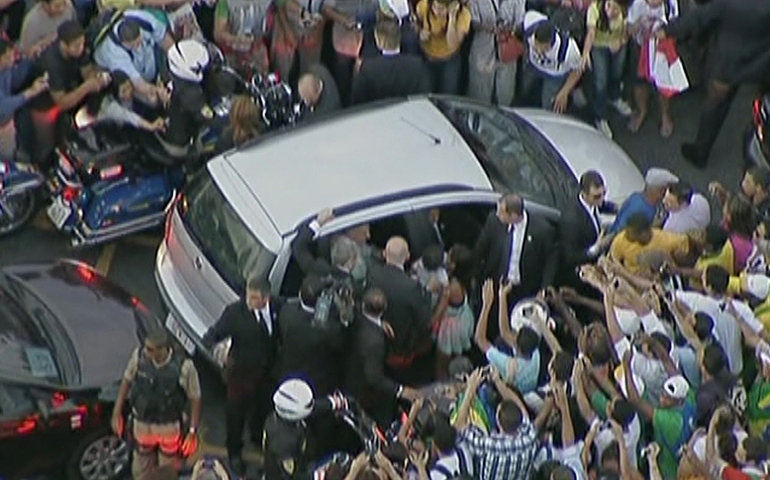 People mob the car carrying Pope Francis as it gets stuck in traffic Monday as the pope is driven from the airport to the Metropolitan Cathedral in Rio de Janeiro in this still image taken from video. (CNS/video pool via Reuters)

Day one of Pope Francis' much-anticipated homecoming to Latin America raised in exquisite form a question Vatican security personnel have faced frequently in Rome since his election in March.

How much of a good thing is too much?

Granted, Francis has proven a remarkably charismatic figure who's generated new excitement about the papacy. Granted, too, Latin Americans feel a natural burst of pride seeing one of their own take the world by storm.

Still, the wild enthusiasm demonstrated Monday night in the streets of Rio de Janeiro  as Francis made his way from the airport to the country's presidential palace created headaches and security worries in addition to impressive scenes. The swelling crowds, apparently, led the motorcade to take a few wrong turns, delaying the pope's arrival by almost an hour, and left some observers wondering about the adequacy of the pope's protection.

Pro-papal sentiment was not the day's only security storyline, however.

Also outside the palace where Francis met President Dilma Rousseff, a small group of protestors upset with the government over a wide range of matters -- including, some said, public spending for the papal trip of just under $60 million -- were pushed back by police using tear gas.

On Sunday, a homemade bomb was discovered in a public bathroom adjacent to a parking lot at the Marian shrine of Aparecida, where Francis is due to visit Wednesday. The bomb was apparently crudely made and with low explosive power, and in any event, it wasn't located in an area the pope was due to visit.

In the end, however, the pope's real worries may come from his admirers rather than his detractors, as the surging crowds witnessed Monday, coupled with Francis' obvious determination not to be separated from them, have raised fears that things may spin out of control -- especially toward the end of the week, when the finale of the July 23-28 World Youth Day is set to draw as many as 2 million people.

In a briefing with journalists Monday night, Jesuit Fr. Federico Lombardi insisted the Vatican is not "especially worried" and said the pope's team has "complete confidence" in the Brazilian authorities to keep things under control.

When it briefly appeared that an adoring mob might overrun the papal motorcade Monday, Lombardi said, the pope's secretary confessed to being frightened, but Francis himself was "never afraid" and actually enjoyed himself, waving at people through the window.

Lombardi said it was Francis' decision to use an open-air conveyance on this trip, as he does for his public appearances in Rome.

"Obviously, he wants direct contact with people and does not want to militarize the situation," Lombardi said.

Lombardi conceded this is the pope's "first experience" of international travel and said maybe there are lessons from Monday's experience that could result in some tweaking to the security protocols for the rest of the week.

Fundamentally, however, Lombardi stressed that the enthusiasm for the pope is a good thing, even if "creates some problems."

The spokesman also said for those traveling in the motorcade Monday evening, it was an "extraordinary experience" of affection for the pope.

No doubt, for those who witnessed it firsthand, the outpouring in the streets of Rio for Francis on Monday was remarkable. There's a fine line, however, between enthusiasm and chaos, and if day one is any indication, Pope Francis -- and, perhaps, the people charged with keeping him safe -- may be walking it for the rest of the week.