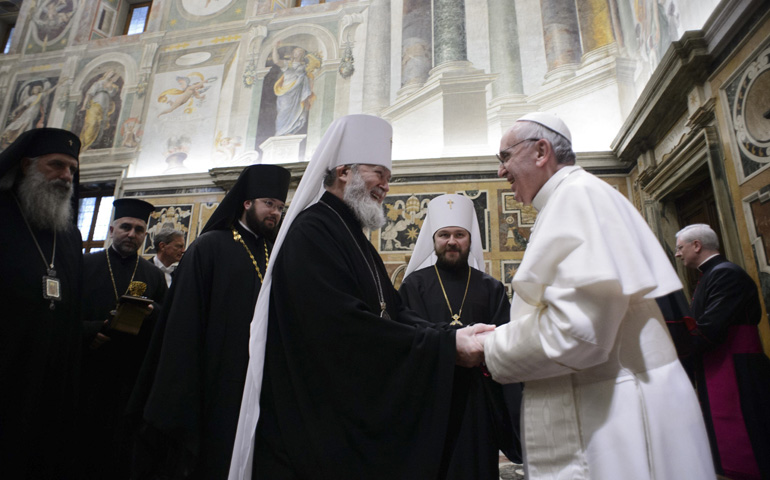 News from Rome these days is focused extensively on the unique style Pope Francis is bringing to the papacy. Here are two leftovers we at NCR have yet to get to.

Francis hosted a sort of religious get-together Wednesday, meeting with representatives of a number of other Christian communities at the same time as leaders of other religious groups, including Jewish, Muslim and Jain communities.

During the meeting, held in the Vatican's ornate Clementine Hall, the pope chose not to sit on any sort of throne or raised platform. Wearing a simple white cassock and cape, he sat in an armchair at the front of the group.

First to greet the pontiff was Bartholomew I, the ecumenical patriarch of Constantinople, with whom the pope met privately earlier in the day. He also had meetings with Metropolitan Hilarion of the Patriarchate of Moscow and with Claudio Epelman, executive director of the Latin American Jewish Congress.

Standing while facing the pope, Bartholomew -- thought to be the first patriarch to attend a papal inauguration in Christianity's 2,000-year history -- told Francis he appreciated his simple style "on the essential, which fills with joy the hearts" of many Christians and non-Christians. Bartholomew also said Francis had given priority to the "justice and mercy" at the heart of Christian teaching.

"We have an obligation to feed the hungry, clothe the naked, cure the sick and, more in general, to care for those in need," Bartholomew said, referring both to Francis' time as archbishop of Buenos Aires and to his homily at his inauguration Mass Tuesday.

The pope, Francis said at that Mass, "must ... embrace with tender affection the whole of humanity, especially the poorest, the weakest, the least important. Only those who serve with love are able to protect."

Speaking to the religious leaders Wednesday, Francis first responded to Bartholomew, calling him "my brother Andrew," a reference to the brother of the apostle Simon Peter, whom the orthodox consider their historic leader, much as Catholics consider Peter theirs.

Continuing, Francis said the presence of so many delegations of different faiths at his inauguration helped him feel "in an even stronger way, the prayer for unity among the believers in Christ and [glimpsed] prefigured in some way, its full realization, which depends on God's plan and our sincere cooperation."

Mentioning the Second Vatican Council several times, Francis said he remembered Pope John XXIII's words opening the council in 1962, when Pope John dedicated the Catholic church to working for unity between the Eastern and Western churches.

"For my part, I wish to assure you, following in the path of my predecessors, of my firm will to continue on the path of ecumenical dialogue," Francis said. "I also ask of you the kindness of a special prayer for myself, so that I might be a pastor in harmony with Christ's heart."

"The church of Christ acknowledges that ... the beginnings of her faith and her election are found already among the patriarchs, Moses and the prophets," Francis said. "I am confident that, with the help of the Almighty, we can profitably continue that fraternal dialogue that the council hoped for and that has been carried out, bearing not few fruits, especially over the last few decades."

Then addressing the Muslims present, Francis called them those who "adore the one, living, and merciful God and who call upon him in prayer."

Ending his remarks, Francis said he also "feel[s] close to all men and women who, although not claiming to belong to any religious tradition, still feel themselves to be in search of truth, goodness and beauty."

They, the pope said, "are our precious allies in the effort to defend human dignity, in building a peaceful coexistence between peoples, and in carefully protecting creation."

In something of a different meeting, Francis met Fr. Adolfo Nicolás, the superior general of the Jesuits, on Sunday in Rome.

While the Vatican has not issued any statements about the meeting between the first Jesuit pope and the head of the order, Nicolás put out a short statement, which America magazine released publicly.

During the meeting, the pope "insisted that I treat him like any other Jesuit," Nicolás said, "so I did not have to worry about treatments, 'Holiness' or 'Holy Father.' "

After offering the pope "all our Jesuit resources because in his new position he is going to need counsel, thinking, persons," Nicolás said Francis walked him to the door of the Vatican hotel where they were meeting and even offered to help the superior general put his coat on.

"There was calm, humor and mutual understanding about past, present and future," Nicolás said. "A Jesuit embrace, again, is a good way to meet and send off a friend."