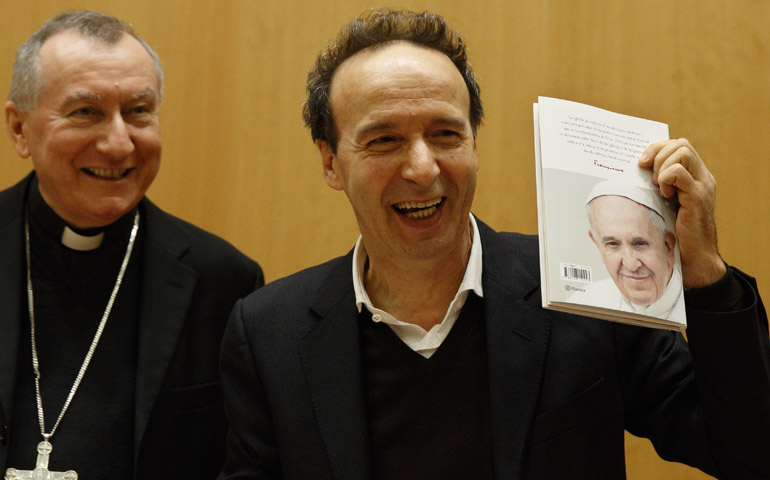 Italian actor Roberto Benigni holds a copy of the book, "The Name of God Is Mercy," during its presentation to journalists in Rome Jan. 12. At left is Cardinal Pietro Parolin. (CNS/Paul Haring)

Pope Francis’ new book-length interview delving into his papacy’s focus on God’s mercy was officially launched at the Vatican Tuesday with presentations by one of the church’s most important cardinals, a fast-talking Italian comedian, and a rehabilitated Chinese prisoner.

Or as the jokester, Oscar-winning actor Roberto Benigni, quipped: There was a cardinal from Veneto, a comedian from Tuscany, and a prisoner from China.

They had all come together for the official international launch of The Name of God is Mercy, a new book released Tuesday in 86 countries that is the result of an interview between the pope and Italian journalist Andrea Tornielli.

The book contains an extensive conversation Tornielli had with Francis focused on the theme of mercy in July 2015. The pontiff speaks expansively about how he understands mercy and what it means to him personally and to the wider church.

Opening the launch event at the Augustinian Patristic Institute Tuesday, Vatican spokesman Jesuit Fr. Federico Lombardi said mercy may even be considered “the theme” of this pontificate.

“It is an essential characteristic of the service Pope Francis is doing for all of us and humanity,” said the spokesman, who also praised the conversational format of the book, saying it allows readers “to enter deeply into the great theme of mercy."

Benigni, who occupies a place in Italian culture that is something of a mix between the slapstick wit of Steve Martin and the Catholic-infused commentary of Stephen Colbert, joked that he said yes to the opportunity to support the book immediately upon a receiving a phone call from the Vatican that began with the words, “His Holiness.”

“For this pope, I can’t say no,” said Benigni, calling the pontiff “revolutionary” and “marvelous.” He would do anything Francis asked, the comic joked, from being his driver to joining to the Swiss Guard.

Cardinal Pietro Parolin, the Vatican’s Secretariat of State, highlighted several different sections of the book and said the material is unique as the pope speaks only on one topic and how it has related to his own life and ministry.

In the book, the cardinal said, “the pope opens his heart.”

“He wants us to enter into the great and reassuring mystery of the mercy of God, almost taking us by the hand,” said the cardinal. “A mystery that is so far from our human calculations, yet so necessary and awaited by us lost pilgrims in these times of trials and challenges.”

The most poignant presentation at the book launch came from Chinese-national Zhang Agostino Jianqing, an immigrant to Italy who related his story of committing a “grave error” at age 19 and being sentenced to twenty years in prison.

Once in prison, Jianqing said he felt within him a desire to change his life, especially so as not to cause more pain to his mother. He then decided to take his middle name, the Italian version of the name Augustine, in thought of the fourth-century saint who embraced Christianity after a turbulent early life.

Jianqing gave a special thank you to Francis for the focus he has given to prisoners.

“I would have never thought of being invited to participate at the presentation of a book of a pope, nor of having the possibility to squeeze his hand,” said the immigrant, referencing a meeting the book launch participants had with the pontiff Monday.

“I am here with my story to witness how God’s mercy has changed my life,” said Jianqing.