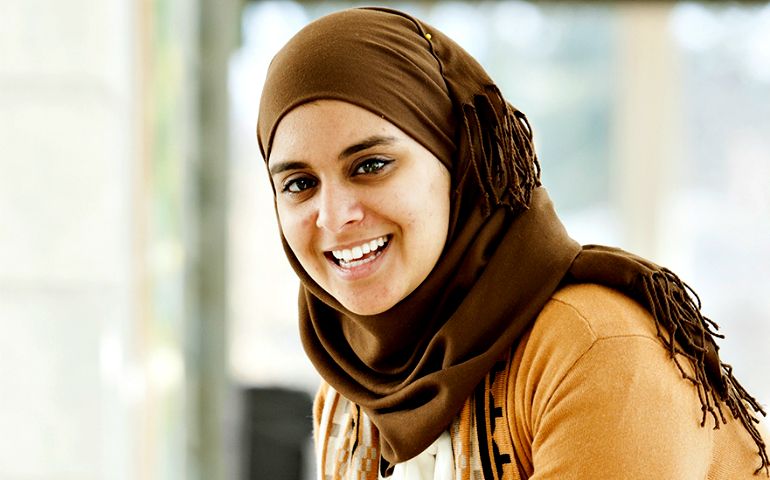 Rana Abdelhamid, founder of the Women's Initiative for Self-Empowerment (Courtesy of Middlebury College)
This article appears in the Transition to Trump feature series. View the full series.

Elections often have religious consequences. The defeat of Al Smith in the presidential election in 1928, for example, signaled that Catholics were not yet fully accepted in the mainstream U.S. political establishment. But the election of John F. Kennedy in 1960 reversed that; it was a major sign that Catholics were finally welcomed as part of mainstream America.

The election of Donald Trump also has religious implications, such as the political resurrection of evangelicals, 81 percent of whom voted to put him in office. White Catholics helped, too, with 60 percent of their votes, although Hispanic Catholics countervailed with only 26 percent for Trump, according to PRRI.

But Trump's election is perhaps most significant for Muslims. The violent actions of a handful of Muslims in places like San Bernardino, Calif., and Orlando, Fla., have been used by ideologues to slander all Muslims. And Trump played on incidents like this during the campaign. So, since the election, many Muslims now live in fear of a Muslim registry, new forms of surveillance, and random attacks by Trump followers.

The "Interfaith Voices" radio show features stories on these themes this week. We begin with Rana Abdelhamid, founder of the Women's Initiative for Self-Empowerment (WISE), who discusses the reality of the "hijab grab" that many Muslim women have experienced. She explains why she runs a self-empowerment and self-defense class for Muslim women.

Then, with Trump having threatened to inaugurate a "Muslim registry," we hear, in conversation with a young Muslim woman, from a 90-year-old Japanese woman who remembers the mandatory registration and internment of Japanese Americans early in World War II. The question: Could this happen again — this time with Muslims?

Next, we hear from Asra Nomani, a Muslim feminist who voted for Trump. Yes, you read that correctly: She voted for Trump. She gives various reasons, but the most serious is what she believes is the inadequate response of the Obama administration in dealing with violent incidents (Orlando and San Bernardino, for example) perpetrated by Muslim extremists. She also discusses her personal problems with Obamacare and loan guarantees, and her frustration with the current U.S. alliances with very conservative Muslim nations like Saudi Arabia and Qatar. She does imply that she voted for him with her "fingers crossed."

Finally, we turn to the Quaker singer-songwriter Carrie Newcomer for music that leaves us on a higher note. Her newest album is appropriately titled "The Beautiful Not Yet."

If you want to listen, here is the link to the audio for the show.

Politics | The religious implications of the Trump election

Lead the way toward peace in the world