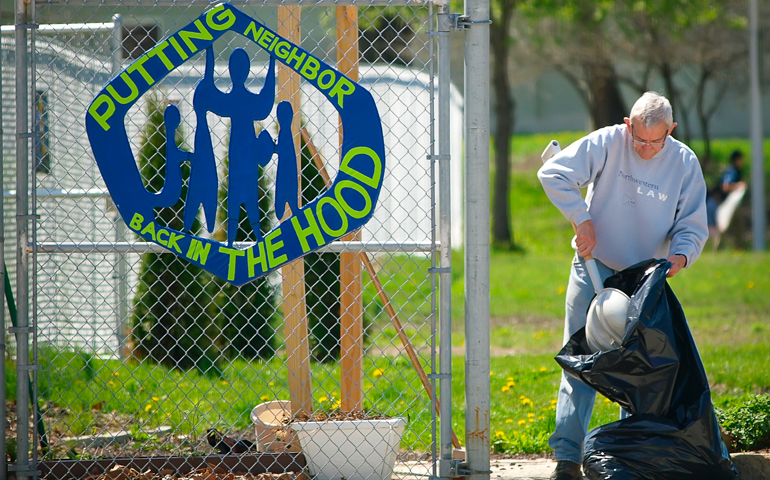 Fr. Denny Kinderman working in the community peace garden on the grounds of Precious Blood Ministry of Reconciliation. (Juan Acuña)

Orlando* had been locked up 18 times. He first came into Cook County Juvenile Detention Center at the age of 12. At age 17 he no longer looked like the little kid who first came into the juvenile center. He spent most of his time in segregation for rule violations or other infractions of the institution. Many would label him, even at his young age, a habitual criminal. And while Orlando's future might be uncertain -- perhaps even bleak -- he has much to teach us.

Orlando had been a ward of the state since he was six months of age. The number of times that Orlando had been in the detention center pales in comparison to the number of foster home placements he had seen over his 17 years. Each time he was detained, there was also the added dilemma of finding him a new placement. His extended stays in juvenile detention were usually due not to his crime, but because of the lengthy time it takes the Department of Children and Family Services to find him a new placement.

Obviously, with the instability in his life, he had a hard time maintaining lasting relationships. People did not remain in his life for any significant time. He came to expect that those whom he met, even those who seemed to care, would soon be out of his life. He built up a strong defense against being hurt; he didn't let anyone too close. While he can be a likable young man, he kept people at a distance.

What happens when those who are supposed to care for us -- mother, grandmother, family -- abandon us? What's the impact of the prolonged trauma of abandonment and neglect? Experience and research tells us that when someone has experienced abandonment or neglect, when they don't have any significant attachments in their life, the result is adverse childhood experiences (ACES). Research says that we might be able to handle one or two issues in our lives, especially if we have stability and support, but when we suffer from a host of adverse childhood effects -- like abandonment, incarceration, abuse, lack of significant relationships -- the result can be devastating.

Trauma cuts at the very core of who we are and how we see ourselves. If the person who is supposed to be our primary caregiver abandons us, it causes us to question our self-worth, our sense of purpose. Orlando grew up feeling as though he was undeserving of being loved. He masked the emptiness and lack of self-esteem by acting out.

I say he has much to teach us because in many ways we are in a state of crisis with a whole segment of our children. Children are growing up disconnected, isolated from all the safety nets that should be there when family situations warrant some kind of intervention. Churches, schools, neighborhood organizations, parks -- all those places that have important places within communities -- are not reaching the many Orlandos of the world. For a host of reasons, many children are growing up outside the societal structures that help create and sustain community.

What we at the Precious Blood Center find, both in the detention center and in the neighborhood, are young people who feel alienated from supportive communal relationships. And since they don't feel wanted, they begin to seek that belonging elsewhere. They begin to identity with others who experience similar feelings of alienation. In many ways gangs are a symptom of a deeper issue.

Grace Lee Boggs, a Detroit civil rights activist, once said, "We urgently need to bring the neighbor back into our hoods." We used that as our motto for the past several summer programs -- putting neighbor back in the hood. Jesuit Fr. Greg Boyle, who began Homeboy Industries in California, calls it the need for "kinship." He says that what we need is kinship -- a sense of being connected -- that we belong to one another. The First Nation People have a saying when someone commits a harm or a crime, "You act as though you have no family." Pope Francis told a group of bishops and priests that they needed to go out and become the church for those outside the walls of the church.

The spirituality of reconciliation is about relationships that can serve to heal the pain and hurt that so many carry within them. As Christians we are called to claim the same zeal that motivated so many before us to search for those who have been scattered, separated and disconnected and build a sense of community and family.

As the news continues to report the violence in Chicago and other urban areas, and as we experience the stress and strain of those in our own communities, we need to have the same sense of urgency. While the task can seem daunting, it all begins with a faithful response to the simple command to love one another, especially those who are alienated or isolated from community.