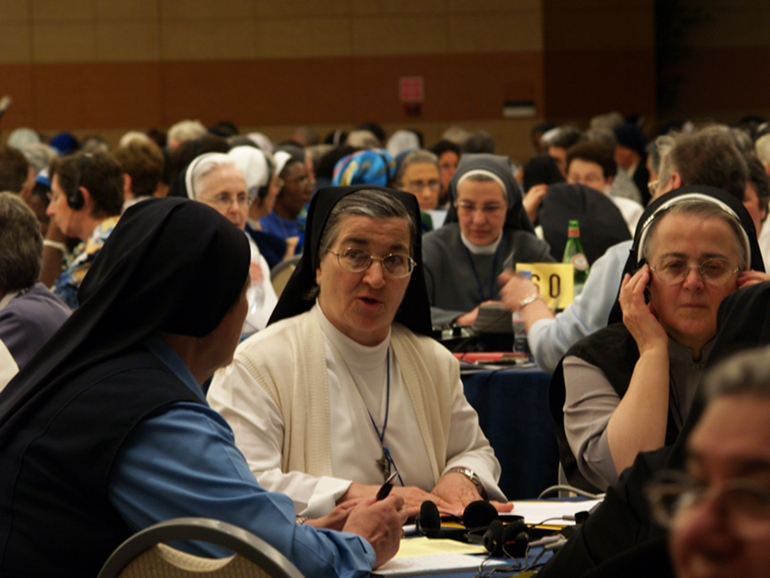 Sisters listen and discuss during a session at the plenary meeting of the International Union of Superiors General in Rome May 3. (NCR photo/Robyn J. Haas)

As a triennial meeting of some 800 of the world’s leaders of Catholic sisters and nuns continued Saturday, focus was on just what it means for the women to hold leadership in the wider church.

Questions among the group, representing sisters from every populated continent, ranged from: How should a Catholic leader use power? Should they ever admit weakness? And what role can feminine imagery play in such considerations?

The answers, at least so far: They should use power as collaborators, not dictators; turn weakness into willingness to give of oneself; and look to biblical examples of women’s unique responses to God’s callings.

The questions and answers come as the members of the International Union of Superiors General (UISG) are meeting in Rome through Wednesday. A group of nearly 2,000 leaders of women religious throughout the world, the sisters’ group meets in plenary assembly once every three years.

The theme for the sisters' meeting this year is "It will not be so among you: The service of leadership according to the Gospel" -- taken from the account in the Gospel of Matthew of Jesus telling the apostles James and John to lead as servants, not masters.

“Jesus modeled for us servant leadership,” Franciscan Sr. Mary Lou Wirtz, an American who serves as the group’s president, told the assembly as she opened the meeting Friday. “It is not about power, or status…but about being among those we are called to serve.”

Examining that notion Saturday morning, Bruna Costacurta, a professor of biblical theology at Rome’s Pontifical Gregorian University, focused on the biblical story of Esther, a Jewish queen to a Persian king.

Retelling the Old Testament story, which focuses on Esther’s willingness to reveal her Jewish heritage to the king in order to stop a planned persecution of her people, Costacurta said the queen’s example highlighted for the sisters how leaders should function.

While Esther put herself at risk of death by being truthful, said Costacurta, she exhibited love.

“Love does not manifest itself in a desire for protection which encourages a selfish or cowardly and defeatist attitude; love, even of those who have leadership responsibilities towards others, should help to love, even at risk of life, if needs be,” said Costacurta, who also heads the Gregorian’s department of biblical theology.

Beyond risking life or limb, the sister leaders were also encouraged Friday afternoon to look to the Second Vatican Council (1962-65) to encourage forms of collaborative and participative models of leadership.

Injecting a presentation on the council’s notions of leadership with personal, and sometimes humorous, stories of community life, Benedictine Sr. Mary John Mananzan asked the leaders to consider using their leadership roles as forms of care and compassion.

Power, said Mananzan, a philosophy professor who lectures widely on issues of globalization and transformational education, should focus on three things: Affirmation, correction, and challenge.

While superiors might have to correct one of their sisters from time to time, said Mananzan, they should also affirm their strengths.

“Affirmation is a core basic need of every human being,” said Mananzan.

“True leaders view themselves as servants or midwives … there is nothing as powerful as true gentleness.”

By being willing to lay down her life for her people, said Costacurta, Esther showed a “true authority” that is “service exercised in meekness, humility, and love that leads to self-giving.”

Questions for the biblical theologian from the superiors general centered more specifically on what authentic leadership looks like, especially in situations of oppression or violence.

One sister said she had come to the meeting from the Middle East, where, the sister said, “people are unable to have any authority and where they suffer discrimination and injustice.”

Responding, Costacurta focused on what the suffering of those there evinces about the role of authority in both ecclesial and secular realms.

“Authority must not be power -- it must be service,” Costacurta said. “There is the continual temptation of the one in authority to exercise that authority as power.”

“It is a constant temptation,” she continued. “We must be aware of it, we must recognize it. And we must fight it.”

“Be attentive that power is an illness,” Costacurta said, speaking directly to the some 800 sister-leaders in the room. “It’s very contagious. It’s worse than any flu. It’s a viral force that’s incredibly powerful, that very easily makes one ill. We have to be vaccinated by a lot of prayer to have many antibodies.”

Another sister referenced a point in the theologian’s talk where she said the role of a leader is not a kingship, but rather mediation of the presence of the divine.

“Is there a way to have a more common understanding of who the divine is that we are mediating?” asked Sr. Teresita Weind, general moderator of the international congregation of the Sisters of Notre Dame de Namur.

Responding, Costacurta again addressed the sister-leaders directly, exhorting them to continually dedicate themselves to a process of nonviolent response to evil. She used images of both a reed bending in the wind, and a candle with a small, flickering flame.

“You, superiors general, must be those who seek good, and go looking for everything that is good -- even the smallest little good,” she said. “In order to begin with that to create the great good.”

“The real strength of power is on the respect of the weak reality without letting oneself become contaminated by that weakness,” she said.

“To enter resolutely into the evil to find what is good,” she continued. “This is the incarnation -- this is also one of your tasks.”