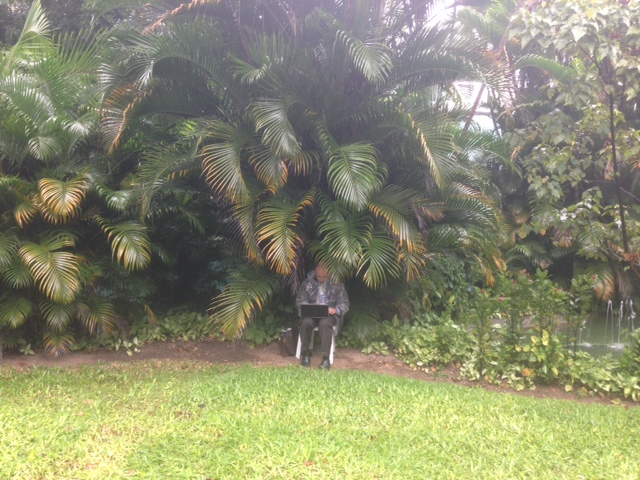 Whenever the pope travels, the Vatican organizes pools, meaning groups of journalists, who set out at the crack of dawn each morning to attend the various events on his itinerary.

Photographers and TV people don't have any choice in the matter because they have to be where the pictures are. Print reporters, however, always face a dilemma.

Do we join the pool on the chance of being witnesses to history? Or do we stay in the press center, where you'll probably see the pope much more clearly on the video feed, you'll have a work space and a reliable Internet signal, and when the story is done, you can write it up without running to catch a bus?

Today I joined the pool, which meant I had the chance to see Francis up close and personal in three settings:

As it has been all week, the weather was terrible, alternating between drizzle and driving rain, and the first two stops were basically open air -- for us, that is, not the pope. There was no work space and no wireless connection. The stop at the Varginha slum took place in a soccer field that, by the time we arrived, was a sea of mud.

That said, tagging along did allow me to pick up a few bits of color -- some about the pope and reaction to him in Brazil, some about the hazards of papal coverage.

The city palace in Rio de Janeiro is a picturesque setting indeed, with the mountains looming in the background and a courtyard framed by palm trees and fountains. On a sunny day, it would have been a delight; Thursday, however, it was a disaster because there was no covered space for reporters to prepare their stories.

Initially, we sought shelter under a platform, but the police shooed us away. (The joke was that we had been "pacified," a play on Rio's recent pacification drive in the slums by sending in shock troops to drive people out.)

I eventually spotted a patch of dry ground under some leafy trees and set up shop there while waiting for the pope to arrive. The photo above, taken by one of my Brazilian colleagues while I was pounding away, captures the moment.

Benedict XVI was famous for largely sticking to his prepared texts when he traveled, and so far, Francis has done much the same thing. He has, however, thrown in a few ad-libs along the way, and we listen carefully for them when they happen.

In the Varginha slum this morning, the pope's text had him telling the crowd that he wished he could share a coffee with each of them. Francis then added, "And not a cachaça," referring to a local booze made of distilled sugar cane.

As it turns out, when Francis visited a hospital for treatment of drug and alcohol addicts Wednesday night, one of the patients who spoke talked about his problems with cachaça, so it was on the pope's mind. His reference to the preferred local hooch drew an appreciative chuckle.

Francis also revived a line from his brief remarks on the papal plane, saying that no one should fall victim to a "throw-away culture," and in the context of calling for greater solidarity, he said that in some circles that term has become "almost a swear word."

Pools are supposed to arrive ahead of the pope so we're in position when he gets there. That often means we have lots of time to mingle with the crowd before things get started, and that was the case Thursday in the soccer field at Varginha.

One local came up to me and launched into a long tirade, which I didn't understand because it was in Portuguese, though the strong scent of liquor on his breath was perfectly eloquent in any language.

Eventually, a Brazilian colleague wandered over and offered a rough translation, with the gist being that this guy wanted me to know how bad it is in Varginha. To make sure I didn't miss the point, he gestured to the ground, meaning the place he lives, and gave a thumbs-down; he then pointed to the dais where the pope was about to speak and flashed an emphatic thumbs-up.

Translation: slum bad, pope good. For this morning, that about seemed to sum up the vox populi.

Pentecostals for the pope

One curious feature of the route planned for us through the alleyways of Varginha to reach the soccer field is that it took us past what I was told is the largest Assemblies of God church in the slum.

Catholicism has been losing people to the evangelicals and Pentecostals in Brazil for decades, especially in the favelas, and that has sometimes bred tension and competitive rivalry between the churches.

Not Thursday, however. The Assemblies of God building was crowded with people, with well-wishers jamming the front area and even hanging out the windows, hoping to catch a glimpse of the pope.

I asked one of them if there wasn't something a bit odd about the reaction, and she put it in the simplest possible terms: "I live in the slum ... he's my pope too."

As we walked into the soccer field where the pope spoke, I was struck by the fact that the fence on one side of the field was festooned with a large banner featuring the image of Archbishop Oscar Romero of El Salvador, who was assassinated in 1980 and is considered a hero to the progressive liberation theology movement.

I asked about it and was told the banner isn't usually there. It was put up last night by a group of young pilgrims from Argentina who made a visit to the slum ahead of the pope and who also have a special devotion to Romero.

Romero is, of course, a hero to many people around the world, but he didn't seem to have a very high profile among the locals. One Brazilian journalist went around asking people what they thought of Romero, and reported that the most common reaction was: "What soccer club does he play for?"

Argentinians on the loose

Finally, the pope's last-minute decision to greet young pilgrims from Argentina this morning, joining them in the downtown cathedral, meant that for a few hours a several-block area of Rio de Janeiro turned into an Argentine colony.

Anyone who has even an inkling of the fierce traditional rivalry between Brazil and Argentina, which is expressed in every possible venue -- soccer matches, commercial competition, diplomatic tiffs and so on -- will appreciate the irony of the situation.

One pundit remarked that under any other set of circumstances, the presence of this many Argentines in the heart of Rio de Janeiro would be considered an act of war.

As the press bus was inching through the crowd, at one stage, excited Argentine youth started pounding on the side. They were actually just trying to say hello, although in a moment of nervousness somebody on the bus shouted out: "Tell them there aren't any Brazilians here!"

In his brief remarks, Francis didn't deliver any sops to national pride. Mostly, he reiterated another point he made on the papal plane: Young people ought to have a special concern for people at the other end of life, meaning the elderly.

With that, the pope took off, the Argentines began to melt away, and the residents of Rio got their city center back.