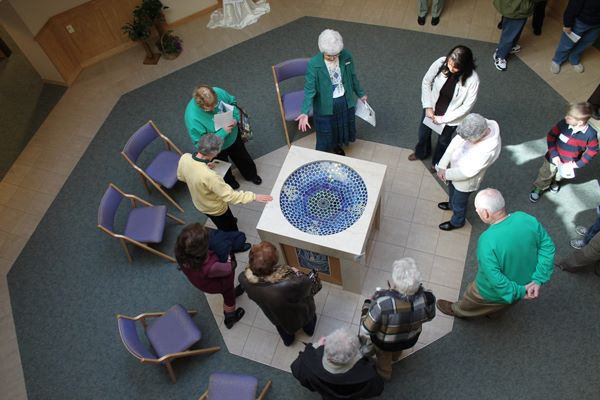 If we’ve said it once we’ve said it a thousand times: It’s not nice to tow a sister’s truck while she’s delivering meals to the homeless. That story and others in the mainstream media caught our eye this week.

To wind up the recent National Catholic Sisters Week, the Sisters of St. Francis of the Holy Cross in Green Bay, Wisc., invited the public for a rare viewing of the convent’s artwork (video above).

When the sisters began building their new convent eight years ago they wanted something unique that would be part of their spiritual heritage, Sr. Ann Rehrauer explained to visitors.

So the order commissioned an artist to create seven glass mosaics based on Franciscan values. They depict wind, water, fire, earth, the sun and moon, stars and values such as forgiveness and contemplation.

“We wanted something that would permeate the whole building and the grounds,” said Sr. Rehrauer. “So that wherever we walk, we’re reminded of who we are.”

More than 300 people attended the open house this month, only the second since the new building opened in 2006.

“How much did something like this cost?” Fox11 reporter Bill Miston asked the order’s vocation director, Sr. Laura Zelten.

Pushing herself to the limit

Buckfast Abbey, a Benedictine monastic community in Devon, England, will officially unveil a large-scale mural next week created by a sister for the abbey’s upcoming millennial celebration.

Her only time off? To have hip surgery.

The mural, displayed in the abbey’s 360-seat restaurant, depicts the monks rebuilding the abbey church on its original foundation.

Before she entered Stanbrook Abbey, Mother Joanna trained as a painter at the Glasgow School of Art in the 1950s, according to the The Plymouth Herald.

The mural project “pushed me to the limit both physically and mentally but there has been a lot of enjoyment in it as well,” she told London’s Daily Mail. “It really has got to be the project of my life.”

A quest to find the remains of Spanish novelist Miguel de Cervantes, author of “Don Quixote,” will begin next month underneath an old convent in the heart of Madrid.

One forensic anthropologist calls it one of the most thrilling cases he’s ever dealt with.

Reuters reports that a dozen elderly cloistered nuns who live in the 17th-century convent are permitting historian Fernando Prado to search there.

Cervantes, who died in 1616, asked to be buried at the Trinitarias convent because the order helped pay a ransom to Moorish pirates who enslaved him.

The exact site of his grave was lost over the years. Only two small plaques outside the convent and inside the church reveal that a literary great is buried there.

“We have a moral obligation to Cervantes, we have been benefiting from his work and glory for a very long time," Prado told Reuters.

The search team will hunt with the type of radar equipment used in crime scene investigations to look through the subsoil under the convent.

"If in this place where there are so few people buried we find more than one man older than 50, who has an injury in his left arm and a gun wound in the chest, I will eat the Bible," Prado said.

Restaurateur and cookbook author Barbara Sibley recently told Public Radio International how much her career in food was influenced by sisters in Mexico.

She grew up in Mexico City as the child of expatriate Americans. She recalled buying small bags of doughy, sweet leftover communion hosts at the door of the convent.

"They would make the host in large sheets, like the size of a letter, and they would punch out the circles. At the convent you could buy large bags of the leftover edges,” recalled the owner of La Palapa Cocina Mexicana in New York City.

"You'd walk to the door of the convent, a gate would open, and a hand would come out with a plastic bag full of these bits."

Her research of Mexican cuisine revealed the influence of foods prepared in the kitchens of the country’s convents, dating all the way back to pre-Columbian times before the Spaniards arrived.

"When they came and colonized Mexico they needed a place for women, and the convents and monasteries were often placed along the roads; they were safe havens, as well as places where they were evangelizing and teaching the native Mexicans about Catholicism,” she said.

The convents grew into schools and cultural centers, and the kitchens became "more and more elaborate,” she said.

One of the most important dishes in Mexican culinary history, chiles en nogada – poblano chili peppers stuffed with pork, beef, fruits and nuts – was developed at a convent, she said.

"The food that we think of as the food of Mexico really originated in the convents,” she said.

So wrong, so wrong

The New Orleans sister was delivering food to the homeless last week when her truck was towed by city employees, The Celebrity Cafe website reports.

She got back to it just in time to see someone hooking it up to a tow truck.

"He was not connected to the truck, but he was backing up, and I said, 'Please, sir, stop. I am getting ready to move,' and he wouldn't, he kept going," she said.

"I had no ticket, he just took off. Yes, I was very surprised. If he said ‘rules are rules,’ well I thought the rule was you had to have a ticket first. I had no ticket."

The city looked into the incident and issued a statement that basically blamed the sister, saying the vehicle was blocking the right-of-way, thus violating parking rules.

She didn’t want the fine waived, she said, just a little compassion.

"They need to understand that we are a hospitable city, and to treat people with much needed respect goes a long way and is much appreciated," she said.

Sr. Loyola Galvin, in her early 90s, is well-known in New Zealand for her green thumb. For more than 15 years she tended the gardens at Our Lady's Home of Compassion on Wellington's south coast.

She’s coaxed hundreds, probably thousands, of vegetables out of the ground over the years, and scores of hungry people have benefited from that bounty.

She recently moved into the sisters’ retirement complex where she still gardens, still grows flowers to help keep the bee population thriving.

Governor-General Sir Jerry Mateparae made Sr. Galvin a Member of the New Zealand Order of Merit for her services to gardening.

She said that, at first, it “seemed rather a strange thing” to be honored with “all these people doing their wonderful charitable work.

“But I think it (gardening) can be a charitable work as well, especially with older people who have become a bit bored if they have to give up their main work.

“If they can garden, even in a small way, it's growing life, and it's very healthy.”

Not since Julie Andrews has a singing nun caused such a stir in the abbey, proclaimed London’s Daily Mail.

If you haven’t yet seen the gobsmacking video of Sr. Cristina Scuccia performing on the Italian version of “The Voice” singing competition, click here.

The Sicilian sister stunned the show’s judges last week with her rendition of the Alicia Keys hit “No One.” The video racked up more than 30 million hits on YouTube in just seven days.

“Are you a real nun?” one of the astounded judges asked sister after she performed.

That breaks the record set by Korean pop star Psy, whose monster hit “Gangnam Style” racked up a paltry-by-comparison 10 million views in 18 days.

She told one Italian newspaper that using her musical talent this way is in keeping with Pope Francis’ pastoral message for priests to reach out to people on the street.

“Who said that a nun cannot perform? It gives out a strong signal if a young woman who has consecrated her life to God continues to do things that any person of my age would do,” said sister, 25, a member of the Ursuline Sisters of the Holy Family.

Winning the show would certainly be great reward. But it sounds like the musical sister has something even better in mind.

Fingers crossed for her.

[Lisa Gutierrez is a new blogger who will be posting weekly for Global Sisters Report. That website is under development, so for now, her work will appear here on ncronline.org; you can read the first two here and here.]