Understanding persecution of Christians in the Middle East 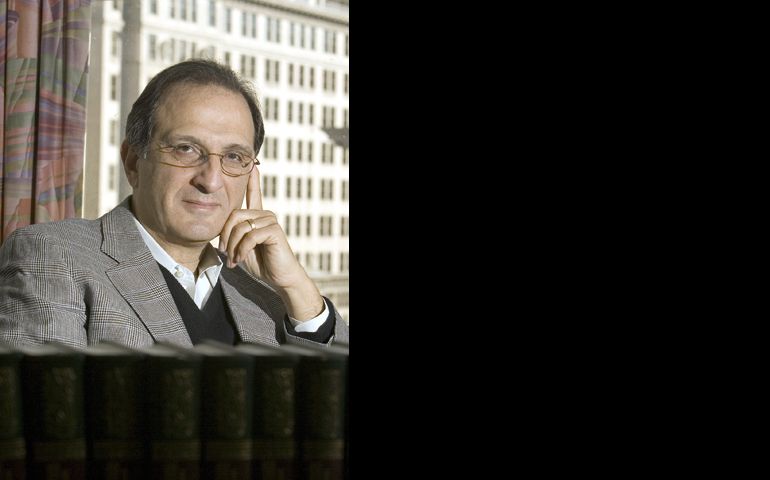 James Zogby, president of the Arab American Institute
This article appears in the Q&As with Vinnie Rotondaro feature series. View the full series.

Recent atrocities committed in Iraq and Syria by the Islamic State have drawn attention to the plight of Christians in the Middle East. But the issue, with deep historical roots and myriad foreign policy implications, predates the incursions of the Islamic State. Who are these Christians? What is life like for them? And what should Americans committed to cause of assisting them keep in mind while attempting to raise awareness of the issue? NCR asked James Zogby, president of the Arab American Institute, for his thoughts.

NCR: Help us understand the bigger picture. How should we view the persecution of Christians in the Holy Land?

Zogby: I'd approach an explanation from two points of view: First, as an American who is very aware of the foreign policy failures of my own country and the problems that the West in general has created, contributing to the last century of instability in the region; and second, as a Christian from the Arab world.

My family is from that region, I have ties there, and I am keenly aware not only of the problems of Christians, but of the people of the region in general, who are facing real uncertainty and dislocation. Each country in the region faces a different set of concerns. All of them have to do with a crumbling order that was established a century ago to serve the interests of the British and French, but the sense of economic and social dislocation that resulted has affected each country, and the component groups within each country, differently.

After the U.S. invasion and occupation of Iraq in 2003, it was the Sunni population that was affected. The Shia majority took control. And the U.S. awkwardly set up an system of government -- a government that they had no right to set up -- that was based on portioning out positions by sect rather than looking at the interests of the country as a whole. In some ways, this contributed to an intensification of sectarian dissent.

I mean, just the U.S. going into Iraq in the first place showed no concern for Christians or anybody else, for that matter. The questions I asked before [President George W.] Bush invaded Iraq in 2003 were: What is the impact going to be on minorities? What is the impact going to be on the Kurds? On the Sunni-Shia rivalry? On Iran? On the Christians caught in the middle? Nobody had answers. Nobody wanted to face these issues. We were rushing off to war, no questions asked.

So you're really looking at it beyond the Christian context.

Yes, and that's how you have to look at it. As a Christian, I have to look at it beyond the Christian context because as a believer, I'm not called to defend myself; I'm called to promote good in the world and to defend others who are vulnerable. Especially as American Christians, this should not be about defending our own and to hell with the rest. This is has to be about how do we help foster, how do we, in a sense, atone for the sins of our past, sins that helped foment this kind of sectarianism, for which not only Christians are paying a bitter price, but also Yazidis and Turkoman and countless others in Syria and in Iraq.

Tell us about the Christians in question.

There is a whole range of Eastern rites, some of which go back to the time of Christ. They're communities that were left behind when the locus of power shifted in the Christian world from the East to Rome and to Byzantium. They stayed up in the mountains or remained in the far reaches of the land.

Their language and culture became fused with their Christian faith. In some cases, these Christians go back to the second and third century. The Coptic church in Egypt goes back to the time of Mark. The church in Lebanon, the Maronite church, goes back to the 300s. The church of the Chaldeans and the church of the Assyrians goes back to that time, as well. Many of them are in union with Rome, but they have their own hierarchy, and they maintain their own language and rites. The richness and diversity of these groups and their rites is something to marvel at; it's quite awesome to think that the language spoken is often the language of Christ.

In the case of my own rite, the Maronite rite, you get the sense of a mountain peasant church. The language is earthy. It's not Roman, the language of the king. Rather, it is the language of peasants. It is a physical kind of language that talks about God as someone you can identify with but still be in awe of. There's a real sense of a physical attachment to the divine, which is something you get in the Eastern church that's different from what you get in the Western church. Taken together, these rights are beautiful to behold. They have their own unique histories, and they exist in the land of Christ.

What do Christians and other minorities face today living in the Middle East?

I don't think people understand that the notion of Arab nationalism began among minority groups and was originally developed to be an identity larger than sect. In the crumbling of the Ottoman era, the danger was precisely that you could have these sectarian movements. Arab nationalists came to the fore and said, "We're not Sunni, Shia, Christian, Jewish. We are Arabs." The idea of being Arab was, "Don't look at the religion, look at our common heritage and our ethnicity." And so that's what took hold in greater Syria, and Christians said, "I can live with this. This is going to protect me." It was a minority regime protecting other minorities against the danger of being swallowed up by a sectarian conflict. The same in Iraq, where the minority group was Sunni, and they did the same thing with the ideology of a secular, nonsectarian government.

Now it is a fact that both Ba'ath regimes, the one in Syria and the one in Iraq, were brutal. Both regimes violated human rights. But they were secular and nationalist, and Christians in fact found themselves secure as communities in that environment. And I think people didn't pay attention to that when they said, "Let's get rid of Saddam [Hussein], let's get rid of [Bashar al-]Assad." They didn't ask, "How do you do that in a way that doesn't unleash a sectarian bloodbath?" The regimes clearly had to go, but it was a question of how they went. The fact is, there was no thought given to what would replace them and what would protect people.

You're on the advisory board of a recently formed group called In Defense of Christians, which is trying to raise awareness about the plight of Christian minority groups in the Middle East. This week, IDC will host an inaugural summit in Washington, D.C. A mix of Catholic and Arab Christian leaders will be there, as well as many American politicians. The list of speakers and advisers leans to the right. Some participants could be characterized as politically polarizing. Sen. Ted Cruz, R-Texas, and John Ashcroft will be speaking, for example. A few days after the IDC event, Oliver North will give the keynote address at a fundraiser in Dallas for the Franciscan Foundation for the Holy Land. Should we be wary of this?

I'm wary of the role that people like Ted Cruz or Christian evangelicals from the right who get involved in this might play because I fear that they almost want to reduce this to a tribal conflict. You know, you can have hard-line right and neoconservative Republicans defending Christians and get a great audience in Congress, but is that going to do anything protect Christians in the Middle East? The answer is no. A Muslim-bashing session is only going to make life more difficult, create real misunderstanding in the Middle East and play right into the negative stereotypes that dominate our political discourse in the West.

How did you get involved with IDC?

I looked at the conference when it was being announced and thought that it was important to do something to elevate awareness about the situation of Christians. I knew all the patriarchs were coming. I spoke with my bishop, the Maronite bishop. He urged me to get involved, and by the time I did, it was already off the ground. He said I should do it because it needs voices that go beyond the partisan ones and that understand the need to create harmony in the region in order to protect minority communities, and if I'm able to play a role that says this is not about bashing Islam, this is not about plucking Christians out and saving them, and to hell with everybody else, if I'm able to play a role that does that, that changes a discourse even a little, then I've made a contribution.

What do you hope for the conference?

The organizers assure me that they have the intention of creating a civil and constructive discourse. I'm not sure that all of the congressional participants share that notion. But we'll see. I hope that the intent of the organizers is the one that triumphs here. Ultimately, the proof will be in the pudding.

Just war theory expert on how to respond to ISIS

Talking Doomsday: How do we turn the corner on nuclear weapons and climate change?

Italian filmmakers: 'Life can be very different...things can change'

Indiscriminate juvenile shackling, like putting kids 'in the stocks'

World | Understanding persecution of Christians in the Middle East

US commission: Russia a major violator of religious freedom

Global persecution of Christians is 'growing worse than ever'