US bishops struggle to find footing at fall meeting 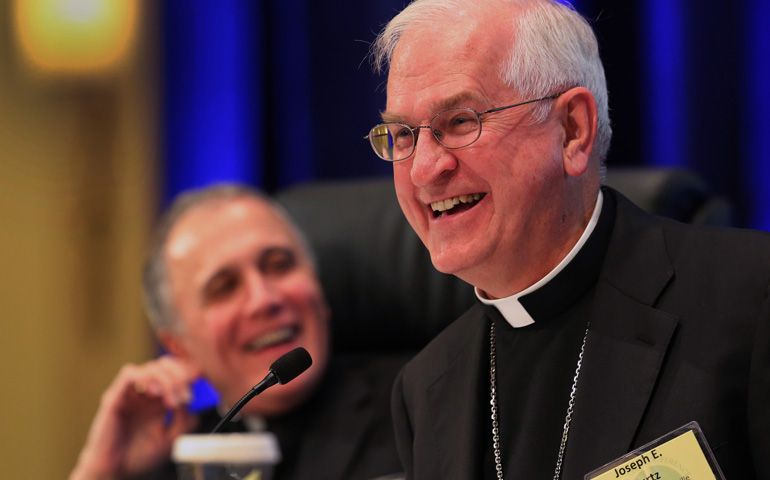 Baltimore — The struggle of the U.S. bishops to find their footing in the era of Pope Francis was on display Monday, the opening day of their annual fall gathering in Baltimore.

Speeches and reports at the meeting, which runs through Thursday, touched on a number of issues and themes -- religious freedom, mercy, the "culture of death" -- but were light on plans of action.

Specifically, how American bishops intend to engage the wider Catholic community in the wake of last month's Synod of Bishops on the family remains an open question.

"My prayer for the synod was that we would witness the beauty of the church's teachings on marriage, that we would deepen the way we accompany those struggling with the many challenges families face today, and that we would encourage -- even inspire -- married couples to have confidence in their ability to faithful live the Gospel of the family," Archbishop Joseph Kurtz said Monday in his first address as president of the U.S. Conference of Catholic Bishops.

Kurtz said the church had taken "some positive steps" to advance those efforts but did not elaborate further. Nor did he make mention of any of the hierarchical dissension that followed the synod.

Kurtz touched on a number of current Catholic talking points in his speech. He quoted Pope Francis four times, citing the Holy Father's call for the church to "go out into the streets" and encouraging bishops to be "joyful messengers of challenging proposals." He referred to children as "gifts." He mentioned the conference's recently concluded Respect Life Month, as well as the "good work" of Catholic Relief Services and the church's "school, hospitals, and social service ministries."

"We've learned that religious freedom is essential to our freedom to serve others and thus to witness our faith," Kurtz said. "Because of this, we'll continue to stand united in our commitment to religious liberty."

Following reports on the state of Catholic education and Latino communities in the United States, Kurtz returned to the subject of the synod. He said the bishops are still awaiting a final English translation of the synod relatio document, the working document summarizing the synod discussions, approved by Synod of Bishops last month and meant to guide a global Catholic discussion on family issues over the next year.

Kurtz also said the bishops are waiting for "direction on how we might make our consultation [with laity] possible."

Also reporting on their experience at the synod were Cardinals Donald Wuerl of Washington and Timothy Dolan of New York.

"The next step is to receive more explicit instructions from the synod office," Wuerl said. "We will be meeting in two weeks' time to work out some sort of process."

Speaking to his fellow bishops, Dolan remarked on what he saw as a false narrative of conflict pushed by the media in relation to the synod.

"There must have been two synods," he said. "From what I've heard and read, brothers, the real synod was divisive, confrontational, partisan; it dwelt only on same-sex attraction, cohabitation, divorced and remarried Catholics," while the synod he attended "was hardly as spicy, juicy, interesting or pugnacious."

"It was a synod of consensus," Dolan said.

At a media press conference hosted by the USCCB, Kurtz and Wuerl reiterated the tentative nature of the synod relatio document and restated the need to await instruction from Rome. Wuerl brought up the concept of "meeting people where they are" in the world.

"The next step is going to be the actual process," he said, "actually engaging all of our Catholic faithful."

US bishops struggle to find footing at fall meeting

Revising the U.S. bishops' agenda for their upcoming meeting

What are religious leaders saying online about gun violence?