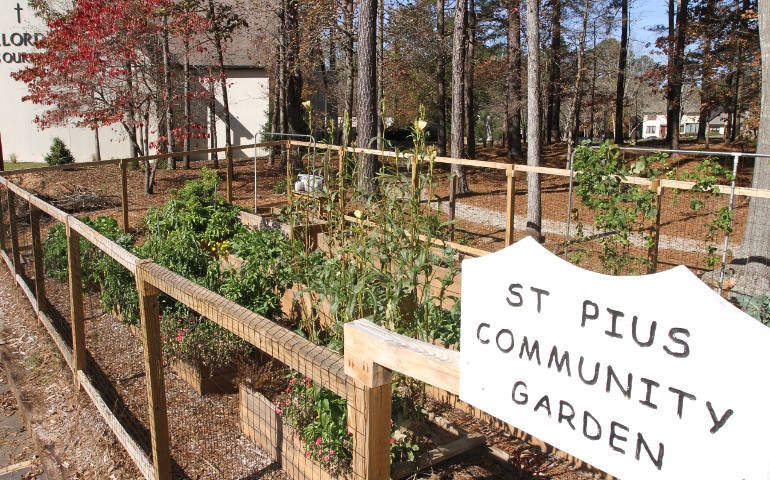 The community garden at St. Pius X Church in Conyers, Ga., which was started in March, is seen Nov. 20. The garden, which feeds families in need, is an example of ways the Atlanta archdiocese hopes Catholics and parishes can implement Pope Francis' encyclical on the environment. (CNS photo/Michael Alexander, Georgia Bulletin)
This article appears in the Francis: The Environment Encyclical feature series. View the full series.

CONYERS, Ga. — Mimi Soileau goes nearly weekly to see what vegetables are ripe to be plucked from garden beds beside her parish church, St. Pius X.

Time spent with her hands in the dirt is nothing new for this 85-year-old master gardener. She's currently harvesting hearty kale, eggplant and broccoli from the raised beds, a new initiative of the parish garden ministry.

These vegetables go to the parish's Society of St. Vincent de Paul conference, which has given the fresh produce to families in need since the growing season began.

"It's an obligation for us to preserve our earth, to keep it healthy. (Pope Francis) is my kind of man," Soileau told The Georgia Bulletin, Atlanta's archdiocesan newspaper.

"We went to different organizations and everybody thought it was a great idea," he said. "(St. Vincent de Paul) is thrilled to be able to give fresh vegetables."

This resourcefulness is what a new guidebook hopes to inspire in individual Catholics and parishes in the Atlanta archdiocese. It's encouraging the faith community to better care for the earth, from forming a parish "green team" and using rain barrels to conserve water to saying grace before meals and sharing rides to Sunday Mass.

Spurred by Francis' environmental encyclical, "Laudato Si', on Care for Our Common Home," this 38-page action plan offers a menu of initiatives for parishes and families.

"It's not theology, it's down-to-earth," said Rob McDowell, a geologist and co-author of the report. "We didn't really invent anything."

Archbishop Wilton Gregory of Atlanta commissioned the action plan a year ago upon learning that Francis planned to issue an encyclical on the environment. It was developed by a team of scientists from University of Georgia and other scientists after the release of the encyclical in June.

McDowell said his Catholic faith has been formed by the church's rich heritage of special care for the planet, going back more than 1,000 years to St. Augustine and creation spirituality. The three most recent pontiffs built on each other's teachings: St. John Paul II critiqued consumerism; Pope Benedict XVI had solar panels installed at the Vatican and was dubbed the "green pope"; and Francis has written the first encyclical dedicated to environmental concerns.

McDowell called the papal document a high mark in the church's teaching.

A professor at Georgia Perimeter College and a member of the Shrine of the Immaculate Conception Parish in Atlanta, he said no area of Georgia is immune from the changing environment.

Georgia is "blessed with abundant natural resources," the report says, including "rich biodiversity" in the north Georgia mountains and one-third of all of the remaining salt marshes on the U.S. East Coast.

The report lists categories of concern including: energy efficiency and conservation; recycling; transportation; water use; buying and sharing food; sustainable landscapes; helping those in the congregation most impacted by extreme weather changes; practical ways to inform and engage young people in the message of the encyclical; and political action.

Within each category are a series of suggested actions, ranked from the easiest, such as shopping with reusable bags, to moderate and advanced changes, such as installing an electric car charging station on parish or school grounds.

The plan proposes that churches or schools ask for an energy audit by the nonprofit Georgia Interfaith Power & Light to help them find energy savings. It recommends faith communities serve their vulnerable members by helping those likely to be most hurt by severe weather. It also advises helping enlist them in appropriate services, such as the Low-Income Home Energy Assistance Program or cooling stations in the summer.

Staff from the Atlanta archdiocesan Justice & Peace Ministries have visited parishes to educate Catholics about the encyclical, from its purpose to the details. Director Kat Doyle said many people come with biased notions about it, so she tells people "what it says and what it doesn't say."

Its key point calls for "integral ecology" where human activity and the natural environment are balanced, she said. The pope looks at the world through a faith-based lens, not politics or science, she said, although he praises both. The goal is to create dialogue on the issue and encourage people to take action on behalf of the environment, she said.

Steve Valk, communications director for Citizens' Climate Lobby, who belongs to the Shrine of the Immaculate Conception Parish, said the pope's message is changing minds.

As a Catholic, he said, "I try to follow the teachings of Christ. The biggest thing he imparted to us was to take care of each other. The people who will be hurt the most will be the poor. From a faith perspective, it's two things: us taking care of each other and also us being good stewards of the world."

"What will it take to protect our world and its societies for future generations? Living a life dedicated to simplicity in the spirit of St. Francis while always looking out for our most vulnerable brothers and sisters," he wrote in the report.