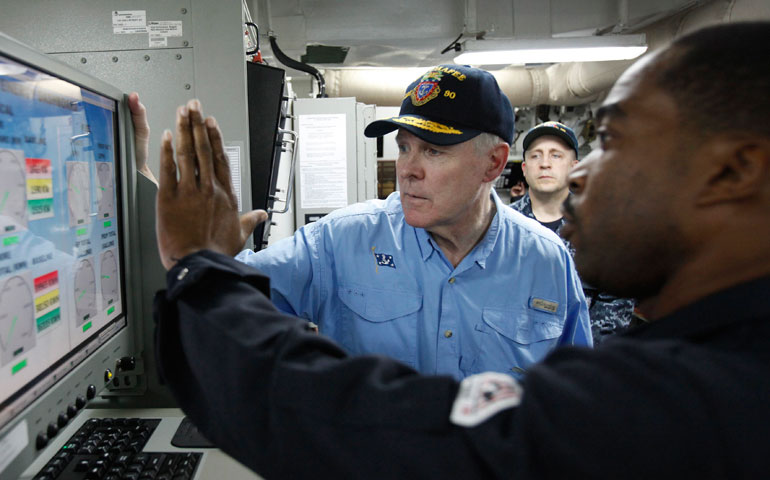 U.S. Secretary of the Navy Ray Mabus listens as Chief Petty Officer Todd Merchant, right, explains how a computer adjusts biofuel consumption aboard the USS Chafee off the coast of Oahu, Hawaii, in 2012. (Newscom/Reuters/Hugh Gentry)

Editor's note: Anticipating the June 18 release of Pope Francis' encyclical on the environment, we are revisiting some of our earlier reporting and analysis of the themes and issues the encyclical is expected to address. Read all of our coverage here.

A hurricane in New York City. A four-year California drought. The 10 hottest years on record, all occurring since 1998. One doesn't need to know the scientific modeling to see that climate change is real.

Yet skepticism continues to exist, and it reaches into the highest levels of governance. Such was the case this February when Senate Environment and Public Works Committee Chairman James Inhofe brought a snowball to the Senate floor in an effort to prove global warming false.

"We keep hearing that 2014 has been the warmest year on record," Inhofe said. "I ask the chair, do you know what this is? It's a snowball, just from outside here. It's very, very cold out."

The Oklahoma Republican then tossed the ball to the sitting Senate president.

Inhofe may represent an extreme view, even for conservatives. He's written a book claiming climate change is a hoax and has been roundly criticized inside the Senate and out. "Sen. Jim Inhofe embarrasses GOP and U.S." ran a scathing Washington Post editorial headline.

But climate change deniers are increasingly running into true believers in big business and the Pentagon -- two groups conservatives hold dear -- who are devising future strategies that take into consideration the "question" of climate change. Slowly but surely, the doubt is melting away, just like a snowball hit by the warmth of the sun.

In the world of big business, "we have seen significant change in industries in terms of strategy," said Andrew Logan, director of the Oil & Gas and Insurance Programs at Ceres, a nonprofit sustainability advocacy organization.

Many are now seeking "a way to benefit from climate change," he said. "It could be tech companies making more efficient hardware or chips. It could be banks that see a chance to lend money to energy startups." These businesses "are moving forward fairly aggressively to change their business strategies to take climate change into account."

"For the largest corporations in the United States, clean energy is now becoming mainstream," the report states. It notes that 60 percent of Fortune 100 companies have set targets for renewable energy and greenhouse gas reduction.

Myriad examples of the trend exist.

Collectively, this has saved the corporations $1.1 billion annually, and has decreased annual CO2 emissions by 58.3 million metric tons, "comparable to retiring 15 coal plants," the report says.

As a result, annually, UPS is now saving more than $200 million, Cisco Systems is saving $151 million, Pepsi-Co $120 million, United Continental $104 million, and General Motors $73 million, according to the report.

Stefani Millie Grant, manager of state government relations and external affairs for Unilever in the U.S., said that her company "has reduced its manufacturing emissions over 30 percent in the past five years and we're committed to going even further."

This March, in response to California's drought, a coalition of corporations with ties in the Golden State -- including Coca-Cola, Driscoll's, Gap Inc., General Mills, KB Home, Levi Strauss and Co., and Symantec -- signed a Ceres-launched declaration stating: "We cannot risk our state's economic future by relying on outdated water management practices, policies and infrastructure. ... It is incumbent on us -- the business community -- to help lead the way."

But not all big business is on board, Logan says. Ironically, two sectors with the most to lose as a result of climate change -- the energy sector and the insurance sector -- "are doing very little."

Large U.S. insurers need to "fundamentally change how they model risk," Logan said, but "most of them will refuse to admit that climate change is a risk at all."

Meanwhile, in the energy sector (the products of which are widely believed to cause global warming) more and more companies are willing to admit that climate change is manmade, Logan says. However, he added, "their basic take is 'We've got a hundred years to figure this out, let's not do anything drastic,' " even though "the science says that the decisions we make in the next short while will have a huge impact."

A similar dynamic exists in the Pentagon and at the Department of Defense, says David Titley, director of the Center for Solutions to Weather and Climate Risk at Penn State University.

"I would say that we are approaching the end of the beginning," said Titley, a retired rear admiral who served as the U.S. Navy's oceanographer and initiated the Navy's Task Force Climate Change while working in the Pentagon. "Relative to five or six years ago, there is much more understanding that the Department of Defense is going to have to deal with climate change," he said.

Nevertheless, "as far as actually putting money in a budget," Titley said, "the Department of Defense has a ways to go."

"If this is a marathon, we're at about mile two," he said.

Marcus King, an expert on climate change and national security at George Washington University's Elliot School of International Affairs, explained what those two miles have entailed.

In that year, the fourth Intergovernmental Panel on Climate Change report was released. The report called the warming of planet's climate "unequivocal" and put the likelihood of human responsibility at a greater than 90 percent probability.

According to King, it "encouraged an analysis to be done within the U.S. intelligence community to say, 'Let's look at strategic impacts.' "

Another report released in 2007 was the Center for Naval Analyses' "National Security and the Threat of Climate Change."

The center's report was "seminal," King said, largely because its advisory board was almost entirely composed of retired three- and four-star admirals and generals.

"Many of these people were conservatives," he said. "Some of them were climate skeptics. And when these people of such gravitas in the defense community got together and found that indeed that there were consequential effects for U.S. security, it really moved the debate forward."

Next up was the Department of Defense's 2010 Quadrennial Defense Review, which listed climate change and energy as "two key issues that will play a significant role in shaping the future security environment."

"Although they produce distinct types of challenges, climate change, energy security, and economic stability are inextricably linked," the review read. "The actions that the Department takes now can prepare us to respond effectively to these challenges in the near term and in the future."

In 2014, the Department of Defense issued a first-ever Climate Change Adaptation Roadmap. According to King, the report "stressed the immediacy of the threat of climate change, not just as a long-term projection that will affect us far in the future, but something that that will be affecting bases and strategy in the immediate near term."

According to a 2014 Pew Research Political Typology survey, 61 percent of Americans agreed that "there is solid evidence that Earth's average temperature has been getting warmer over the past few decades." Thirty-five percent disagreed.

But that does not mean that climate change denial currently has a shelf life, says Kyle Kondik, managing editor of Sabato's Crystal Ball, a website run by the University of Virginia's Center for Politics.

"Outright climate change denial is probably becoming less and less viable," Kondik wrote in an email. "But just because that is happening doesn't mean that Americans actually care all that much about doing something about it."

Another 2014 Pew poll states his case. Even though more Americans now believe climate change is real, they don't rank it "as one of the top threats facing the country," Pew said.

Politically, Kondik wrote, "just because Republicans might feel a little bit more pressure to accept that human activity is contributing to climate change ... does not also mean that they are willing to do anything about it."

A version of this story appeared in the may 8 print issue under the headline: Business, Pentagon pursue climate change strategies.