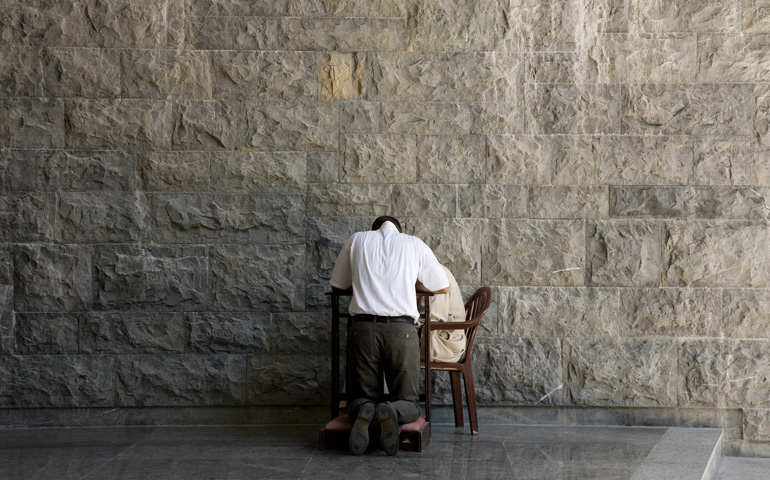 A man makes a confession to a priest prior to Sunday Mass at the Basilica of Our Lady of Lebanon in Harissa, east of Beirut, Aug. 26. (CNS/Dalia Khamissy)

A practical advantage of meatless Fridays during Lent is that it gives the penitent a reason to go to confession. I recall weekly confession during my childhood, when Mom and Aunt Josie would drag me to church each Saturday afternoon even if it meant they had to place a tissue on their heads before entering. The “big three” got the ball rolling: “I missed Mass on Sunday, I ate meat on Friday, and I disobeyed my parents.” Those of us lucky enough to have siblings got a bonus: “I fought with my sister.” The number of times each transgression was committed provided the only variation from one week to the next. The penance was always “Say three Hail Marys.”

I felt sorry for the priest having to sit hours on end through a drone of unoriginal sins. One year, I scoured the Old Testament in search of an exotic peccadillo. After my usual laundry list, I confessed: “And I ‘muzzled the ox that trod the grain underfoot,’ ” and for a touch of reality, added, “Twice.”

Father was not amused. Despite the dark, screened confessional, the pastor apparently recognized my voice. “Knock it off, Joe!” he said. My citing Deuteronomy 25:4 didn’t help. I recall getting more than a few Hail Marys that day.

Later I learned St. Paul applied this law of Moses to workers enjoying the fruits of their labor (1 Timothy 5:18). How we treat animals goes hand-in-hoof, so to speak, with how we treat one another. It wasn’t such an arcane law after all. Psychologists say people who abuse animals are more likely to mistreat humans. I don’t think it’s a coincidence stories about animal abuse and cruelty toward people are on the rise.
|
It occurred to me that guilt has, over the years, gotten a bum rap. Guilt, in fact, serves a useful purpose. It pricks our conscience when we have violated our own standards of right conduct. Granted, since the 1960s guilt has fallen into disfavor. We went from feeling far too guilty for small things to feeling guilty about nothing. People misplace their guilt. Why was missing Mass confessed but few mentioned failing to pay workers a living wage? Or defrauding a business partner? Or deceiving customers or clients? Or taking delight in harming animals? “You shall not muzzle the ox ...”

I came to a deeper appreciation of the sacrament of reconciliation and the power of forgiveness when I served as a missioner to Korea in the 1980s. One afternoon I met a soldier who was visiting our Maryknoll house in Seoul. I could hardly believe this gentle, humble, soft-spoken man had participated in the Kwangju Massacre in 1980, in which hundreds of civilians had died. Without prompting, he told me he had killed two or three people. “It was kill or be killed,” he said, then added, “But if every Korean, from the president on down, shook my hand and said I did a good job, I know in my heart I am a murderer.”

Although he was not Christian, I spoke about forgiveness through Christ and his cross. “God’s power to save is greater than our power to sin,” I said. “Jesus came for people like you and me, to take away our sins.”

He just shook his head. “I am a Buddhist,” he said. “I don’t believe in forgiveness.” We sat in silence and then he looked at me and said, “I believe if not in this lifetime, than in some future life I must die the same way I killed those people.” His despair was palpable; his guilt unbearable.

I would love to tell you this soldier converted to Catholicism and found forgiveness, healing and salvation, but if he did, I haven’t heard. I only hope what I told him about the mercy of God stayed with him and gave him hope.

Nowadays, as I sit through countless confessions each Lent, I wonder if I or another priest will have the privilege of hearing that soldier’s confession and witnessing the miraculous transformation when justifiable guilt surrenders to revolutionary grace. I wonder which will win out in people’s lives, karma or the cross?

[Maryknoll Fr. Joseph R. Veneroso is a former editor and publisher of Maryknoll magazine and Revista Maryknoll, and the author of several books, most recently Mirrors of Grace (Orbis).]

Editor's note: We can send you an email alert every time Soul Seeing is updated. Go to this page and follow directions: Email alert sign-up.

A version of this story appeared in the Mar 1-14, 2013 print issue under the headline: Guilt gives way to grace.