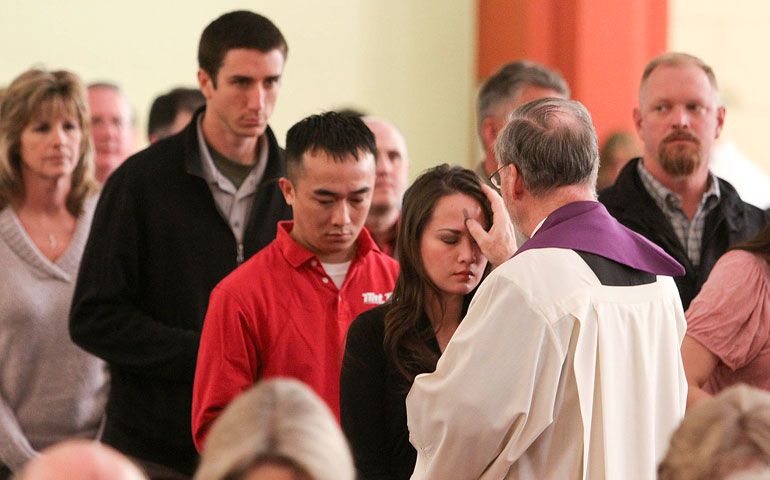 Editor's note: How many of our problems, resentments and grudges arise from an inflated ego? Pride prevents repentance and our living a new life in Christ. The ego must die, but it won't give up without a fight. In this series, titled "Deliver Us from Ego," Maryknoll Fr. Joseph Veneroso will explore Lenten devotions to help us rediscover our God-given humanity with humility and humor, and to reveal our true self in the process.

As a teenager in the 1960s, I proudly wore ashes as a sign of Catholic identity, if not humility. During Lent, deprived of chocolate, candy and movies for 40 days, I became sufficiently grumpy, so people would see what joy filled my heart at Easter. My sadness stemmed more from sugar withdrawal than contrition. My alleluia meant my diet and life could return to normal. Jesus' death and resurrection provided the backdrop.

When Vatican II suggested doing something positive during Lent, I gamely added daily Mass and the Stations of the Cross to my devotions. My religion teacher pointed out these things may help me personally, but they didn't benefit other people. Other people? I hadn't considered other people as a motivation for my religious observances.

Once I became a priest and helping people became a way of life, I sought a practical purpose for my Lenten practices. Fasting would help me lose weight; giving up coffee would help break my dependence on caffeine. Once again, other people popped my piety when a co-worker commented, "How come every time you give up coffee, we do penance?"

Feigning civility during seasonal caffeine deprivation, one year I traveled to Guatemala to cover stories for Maryknoll magazine. It was already the fourth week of Lent. The trip would take my mind off the coffee I craved and see me safely through Holy Week.

From the remote village of Sayaxché, we traveled by jeep for two hours over dirt roads deep into the jungle. Leaving the jeep on the side of the road, a guide led us on foot for two more hours, even deeper into the forest, where people had sought refuge from that country's military. As we approached the refugee camp, the people came out to greet us. They welcomed us with a lukewarm bowl of homemade "coffee" -- an over-boiled confection with chucks of beans floating on top. I smiled wanly and drank, sifting the grinds through clenched teeth. "There goes my Lenten sacrifice," I thought, "and it doesn't even taste good." God does indeed have a sense of humor. But wasn't this, in fact, a truer sacrifice, pleasing to God? At that moment, accepting their hospitality trumped my personal piety.

Over the years, people broadened my appreciation of fasting and abstaining. My latest mentors are Buddhists. The goal of fasting in Buddhism is to cultivate a spirit of detachment and mindfulness. This in no way compromises, much less contradicts, Christian beliefs, but rather helps calm our minds and purify our hearts, the better to appreciate Jesus, other people and, yes, things in our lives.

My life had been on automatic pilot. I could go through an entire day without thinking about what I was doing or why. I woke up, turned on the TV, walked the dog, drank endless cups of coffee, went to meals and prayers and Mass and work, walked the dog, played video games, watched TV and went to bed. Each day, each week, each month blended into the next.

Once again Lent calls me to detachment and mindfulness. This time, in addition to no coffee, I decided no TV, no Sudoku, no Angry Birds, no Words With Friends and no Facebook. None of these things is bad, but each insidiously filled my mind and days with mindless busyness.

To be sure, the weeks of Lent are rough. But instead of seeing each sacrifice as a privation, I welcome them as painful reminders I have not fully surrendered to Christ's call to freedom. Things aren't supposed to control me; I am supposed to control them and use them to help others and thus witness to the reign of God.

Now, absent distractions and amusements, I let the Spirit lead me into an emotional wilderness to wrestle with my own demons and temptations. With the Word to sustain me, I participate in daily Mass, prayer and Stations with mindfulness and intentionality. This fills each moment of life with intense beauty and joy, and propels me toward others.

Stripped of pretext and pretense, I look forward to celebrating Easter by sitting with friends and enjoying a single cup of coffee with gratitude to God.

Next: Guilt gets a bum rap.

[Maryknoll Fr. Joseph R. Veneroso is a former editor and publisher of Maryknoll magazine and Revista Maryknoll, and the author of several books, most recently Mirrors of Grace (Orbis).]

Obama, an Enneagram One, to live the law

Let's pray to rise above our culture of so many things