Skip to main content
Vatican
Culture
Book Reviews
This story appears in the Synod on the Family feature series. View the full series. 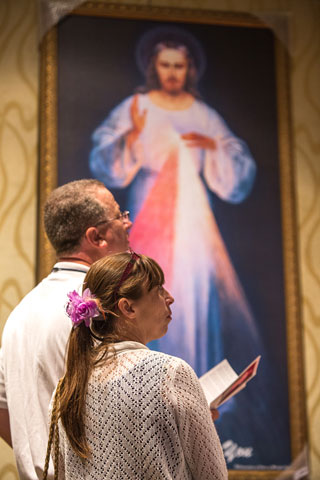 Patrick and Cindy Rice from Oregon review Divine Mercy images and materials of the Apostles of the Divine Mercy apostolate Aug. 4 in Orlando, Fla. (CNS/Tom Tracy)

MERCY: THE ESSENCE OF THE GOSPEL AND THE KEY TO CHRISTIAN LIFE
By Walter Kasper, translated by William Madges
Published by Paulist Press, $29.95

Cardinal Walter Kasper's most recent book translated into English bristles with the claim that mercy has been "criminally neglected" in recent dogmatic theology, a "disappointing, even catastrophic" situation.

This neglect has not been universal. St. John XXIII sought "the medicine of mercy" over "that of severity" in inaugurating the Second Vatican Council. St. John Paul II dedicated his second encyclical, Dives in Misericordia, to it and canonized St. Faustina Kowalska, known for her popular image of and devotion to Divine Mercy.

The current pope also values mercy. During the most recent conclave and while still Cardinal Jorge Bergoglio, he received a copy of this book from Kasper and remarked, "Ah mercy! This is the name of our God."

At his first Angelus, Pope Francis announced, as the cover declares, "This book has done me so much good." Mercy, Francis said, "changes the world … makes the world less cold and more just. We need to understand properly this mercy of God," a task at which this book succeeds.

This welcome translation balances fidelity to the German original with readability in English. It also makes available to a wider audience Kasper's positions on themes -- such as the relationship of justice to mercy -- that figured centrally in the debates leading up to the extraordinary Synod of Bishops on the family and that will surely arise in the synod itself.

Kasper claims that mercy has fared poorly in recent theological discourse because of its emphasis, at least in the German and French sources cited, on a metaphysical assessment of God instead of on the biblical record of God's work in history.

As a result, some theologians have had difficulty making sense of God's compassion. Kasper calls this neglect "pastorally ... a catastrophe."

"The proclamation of a God who is insensitive to suffering is a reason that God has become alien and finally irrelevant to many," he writes.

Kasper develops his rich and persuasive argument by tracing a trajectory from philosophical and interreligious accounts to its place in the Bible and theology. He then turns to its personal, ecclesial and social implications. He concludes with a chapter on Mary as an archetype of mercy.

This is a thorough book, as its endnotes, referencing mostly German scholarship, reveals. It is at ease with representatives of the philosophical tradition and conversant with other religions. For example, Kasper reminds readers that, in Islam, each of the Quran's suras, save one, begins by invoking God's mercy and that, of all the names for God, those evoking God's mercy are the most frequently used.

Kasper does not confine his reflections to the theoretical. He draws on his own pastoral experience as a bishop. He highlights the affective domain, citing a page-long prayer about mercy penned by St. Faustina. He addresses popular practices, including a lengthy reflection on devotion to the Sacred Heart. "In the heart of Jesus, we recognize that God ... has a heart (cor) for us, who are poor (miseri), in the broadest sense of the word." God is therefore "merciful (misericors). In this way, the heart of Jesus is an emblem of God's love, which became incarnate in Jesus Christ."

He does not shy away from disputes about mercy. For example, he cites with approval Hans Urs von Balthasar's "ambitious" claims about universal salvation and, with him, rejects both "cheap optimism" (as expressed by the formula "Hell exists, but it is empty") and "hell-fearing pessimism"; neither does justice to the biblical or theological tradition.

He depicts God as one who "recommends," "courts," and "woo[s]" us but does not "force" or "overpower" us. We "can hope for the salvation of all, but factually we cannot know that all will be saved. Both divine freedom and human freedom are a mystery."

Kasper concludes this discussion by saying, "Mercy courts every human being to the very end; it activates the entire communion of saints on behalf of every individual, while taking human freedom with radical seriousness. Mercy is the good, comforting, uplifting, hope-granting message, on which we can rely in every situation and which we can trust and build upon, both in life and in death. Under the mantle of mercy, there is a place for everyone of good will."

To be sure, Kasper can come across as defensive ("We do not worship Mary"), narrow (the conversation partners in his notes are mostly European men), and anthropocentric, with little attention paid to the implications for mercy in the growing focus on creation. Also, his enthusiasm for mercy can lead him to find it seemingly everywhere and so obscure distinctions with, for example, love.

To the point of this book, he rejects a weak "pseudomercy" that undercuts justice and fails to take seriously God's holiness and judgment because it is driven by "a banal and trivializing image of a saccharine 'dear-God.' "

But, more often, he exemplifies a refreshing breadth that discerns goodness in unexpected places, across denominational, religious, political and philosophical lines. He draws on art, liturgy and language to craft his arguments.

In doing so, he reflects the image of God he advances. He sets aside as inadequate the mercy-justice divide because there is a breadth to God's justice that encompasses mercy. "Mercy is God's very own justice." Thus, God's justice is not punitive but one that, in mercy, justifies or makes the sinner (not the sin) right.

Kasper's latest book is the work of a justly renowned scholar. It prepares a solid foundation for others in different contexts to build upon. Yet, it is also the mature work of one who grew up during Hitler's rise to power, has witnessed great changes in the church, and been a leader in the promotion of Christian unity and reconciliation with Judaism.

With a wisdom born of much experience, Kasper seeks not simply to inform but to transform and to do so now. He concludes the book's longest chapter with a kind of coda that reflects not an octogenarian weariness but an urgency the church and world need to hear: "The experience of divine mercy encourages and obliges us to become witnesses to mercy in the world. ... Human mercy … is the concrete form of divine mercy in the world."

[Thomas Ryan is professor of theology and ministry and director of the Loyola Institute for Ministry, Loyola University New Orleans.]

A version of this story appeared in the Oct 10-23, 2014 print issue under the headline: Theme of mercy echoed in synod debates.